Apart vs A Part: What's the Difference? 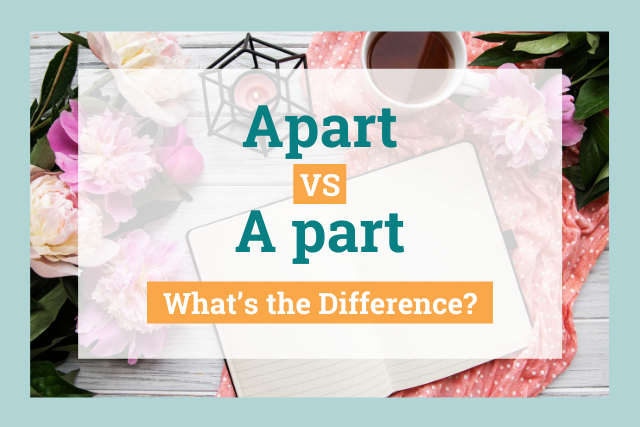 Many writers mix up apart and a part, since the only visible difference between them is a space. But these two words actually have very different meanings—in fact, they’re basically opposites!

So, which one’s the correct word? Apart means “separated,” while a part means “a piece of a larger group.”

This article will explain the difference between apart vs a part, and help you understand how to use these two words. 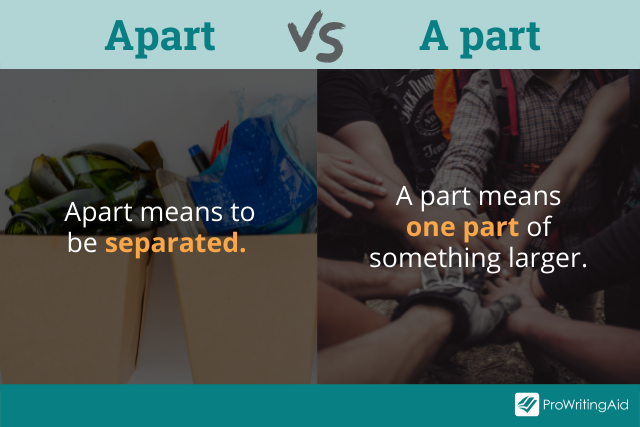 A Part: Definition and Meaning

The phrase a part is a noun phrase that refers to a piece of a larger group. This makes sense because it literally means “one part.”

For example, you might say “Are you a part of Billy’s book club?” or “Do you need to buy a part for your broken stove?”

The word apart can be an adjective, an adverb, or even a preposition.

As an adjective, apart modifies a noun to show that this noun is separate from something else. For example, you might say, “I hate being apart from you for so long.”

As an adverb, it means “separately.” For example, you might say, “My sister and I live three miles apart.”

Finally, the phrase apart from is a preposition that means “except for” or “other than.” For example, you might say, “I’m happy at my job, apart from the boredom of Monday morning tasks.”

The Difference Between Apart vs A Part

If thinking about the meaning isn’t helping, you can also ask yourself what role the word serves in the sentence. If it’s a noun, you should probably use a part. If it’s anything else, you should use apart.

You’re looking for a noun, and you’re describing being a piece of a greater whole. Therefore, the correct grammar is “be a part of a team.”

If you’re not sure which spelling to use, you can run your writing through ProWritingAid, which will highlight any misuse of a part vs apart, and help you replace it with the correct version. 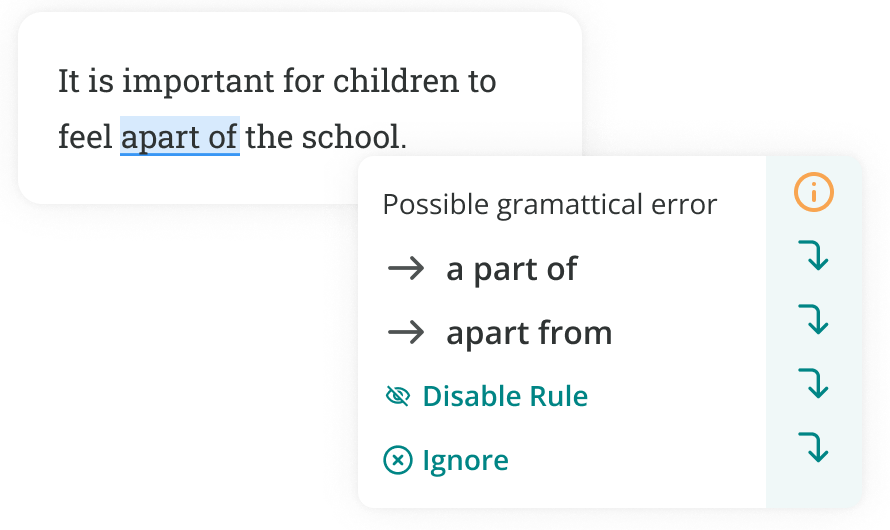 Examples of A Part Used in Sentences

Let’s look at some examples of a part in sentences from successful English books.

“Death is not the opposite of life, but a part of it.”—Haruki Murakami, Blind Willow, Sleeping Woman

“Every minute you spend with someone gives them a part of your life and takes part of theirs.”—Ally Condie, Matched

“If all else perished, and he remained, I should still continue to be; and if all else remained, and he were annihilated, the universe would turn to a mighty stranger: I should not seem a part of it.”―Emily Brontë, Wuthering Heights

“My sister will die over and over again for the rest of my life. Grief is forever. It doesn’t go away; it becomes a part of you, step for step, breath for breath.”—Jandy Nelson, The Sky is Everywhere

“Maybe you’re playing a part on a great stage with only yourself as audience.”—John Steinbeck, East of Eden

Examples of Apart Used in Sentences

Now let’s look at some examples of apart from successful English books.

“Memories warm you up from the inside. But they also tear you apart.”—Haruki Murakami, Kafka on the Shore

“I think we dream so we don’t have to be apart for so long. If we’re in each other’s dreams, we can be together all the time.”—A.A. Milne, Winnie-the-Pooh 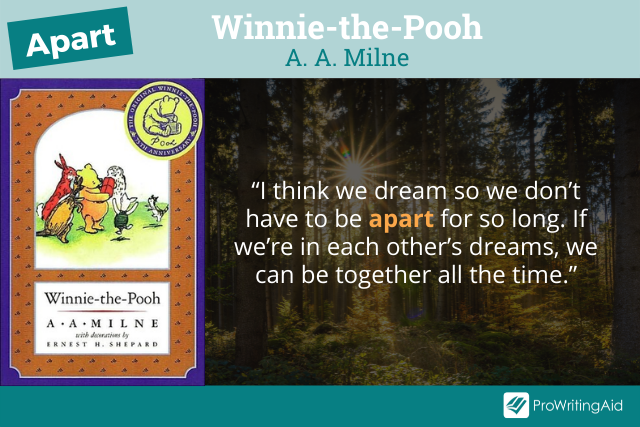 “Only after disaster can we be resurrected. It’s only after you’ve lost everything that you’re free to do anything. Nothing is static, everything is evolving, everything is falling apart.”—Chuck Palahniuk, Fight Club

“It takes ten times as long to put yourself back together as it does to fall apart.”—Suzanne Collins, Mockingjay

“And then something invisible snapped inside her, and that which had come together commenced to fall apart.”—John Green, Looking for Alaska

“You’re going to wake up one day and realize what you’ve done, and you’re going to regret the time you wasted apart from him for the rest of your life.”—Jamie McGuire, Providence

Quick Tip for Choosing Apart vs A Part

One easy trick for knowing when to use apart or a part is to look at the word that comes next.

There are exceptions to this rule, so you should still look at the word’s meaning and part of speech to ensure you’re using the right spelling.