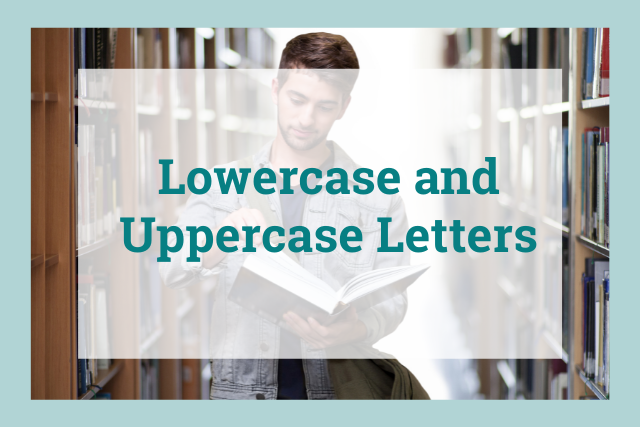 The 26 letters in the English alphabet can take two forms: uppercase and lowercase. Each form serves a different function. Most of the letters you see in writing are lowercase.

Lowercase letters are smaller and sometimes take a slightly different form than their uppercase counterparts.

Notice the L that starts the word Lowercase in the previous sentence. It’s larger than the other letters and looks different than the l in the word letters. 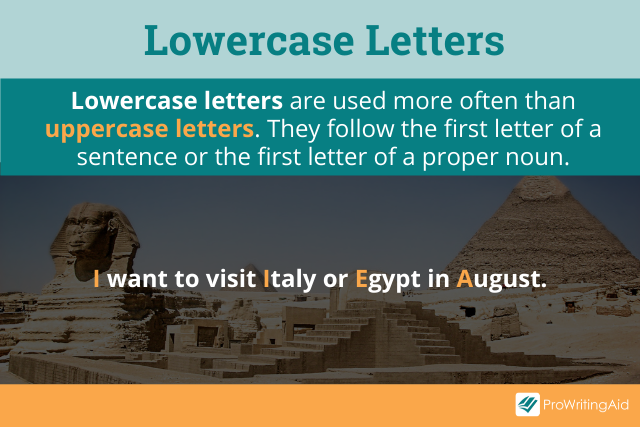 These are the lowercase forms of each of the 26 letters in the English alphabet.

Uppercase letters, also called capital letters, are used to start sentences and as the initial letter of a proper noun.

These are the uppercase or capital forms of the 26 letters in the English alphabet.

When Should You Use Lowercase Letters?

It’s easier to explain the function of lowercase letters by saying what they don’t do. Lowercase letters do not start sentences and are not used as the initial letter of a proper noun.

They are used for all the remaining letters in sentences and following the first letter of proper nouns.

Most of the letters you write will be lowercase. A quick scan of this article shows that uppercase letters are used in specific circumstances and lowercase are used everywhere else!

In the first sentence of the paragraph above, Most of the letters you write will be lowercase., only the M in Most is an uppercase letter. All the others are lowercase.

Use Lowercase Letters with Common Nouns

Nouns are words that represent a person, place, thing, or idea. There are two types of nouns: common and proper.

Common nouns refer to a non-specific person, place, thing, or idea. They are generic terms. The chart below shows the common noun version of the proper nouns used above.

Proper nouns refer to a specific person, place, thing, or idea. For example, the name of a particular person, city, country, day of the week, or month is a proper noun.

The initial letter of a proper noun is an uppercase letter. The rest are lowercase.

These sentences contain both proper and common nouns (in bold). The proper nouns are capitalized, the common nouns contain only lowercase letters.

When Should You Use Uppercase Letters?

Most often, capital letters are used to start sentences and proper nouns, but those aren’t the only times.

This list explains other circumstances that require uppercase letters. 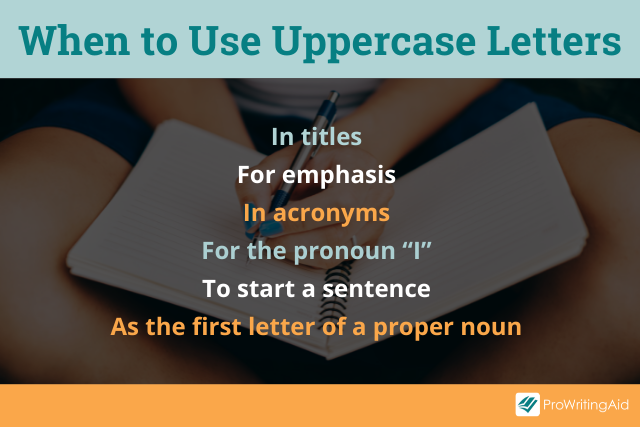 1. The first word of a quote that’s part of a complete sentence

When an embedded quote is also a complete sentence, the first word of that quote should be capitalized.

2. Titles of literary or artistic works

Capitalize the first, last, and all other words in a title except conjunctions, articles, and prepositions of fewer than four letters. This is called “Title Case.” (Some style guides have even more specific guidelines, so always check!)

When a title such as “Dr.” or “President” precedes a specific person’s name, capitalize it.

Use lowercase letters if the title is used as a description or not followed by a specific name.

If you feel overwhelmed by the different rules of capitalization, remember that ProWritingAid is here to help!

It’s a thorough grammar checker (and more) that will detect errors in capitalization for you.

You should always capitalize the pronoun “I.”

An acronym is a word formed by taking the first letter of each word of a compound term. Initialisms are similar abbreviations, except that the letters are pronounced individually rather than forming a new word.

Some phrases are also abbreviated as initialisms:

Acronyms and initialisms should always appear in uppercase form.

Be careful with this use of uppercase letters!

When you put words or sentences in ALL CAPS, a practice often seen in texts or posts, you add emphasis to your words. Consider how that emphasis will be perceived.

For example, texting someone “HAPPY BIRTHDAY!” instead of “Happy birthday” is a way to convey excitement and show you really mean those good wishes.

Other times, ALL CAPS can sound accusatory, demeaning, or rude.

Remember that ALL CAPS in writing makes it seem as though the speaker is yelling. Keep that in mind before you press “send” on your uppercase text or post!

A Summary of Lowercase and Uppercase Letters

Lowercase letters are used for common nouns and for every letter after the initial letter of the first word of a sentence.

Uppercase letters are most often used at the start of sentences and as the first letter of proper nouns, though there are other times to use the capital letter form too.

johan.ljunggren1
I have a question rather than a comment then it comes to upper and lower case use. Is there a single general term for uppercase and lowercase letters? Let's say you want to explicitly describe in one word to a user who is creating a password, that it can consist of either uppercase or lowercase letters. What word would best be suited?

kyle.kucera1
Hey there! Thanks for commenting. There is not a single-word term for this. Trust us - we looked it up ourselves!
Your explanation is amazing and enough to completely understand about the upper and lower case . Can you explain more about the other text case like title cases , sentence cases etc? OR should we use the online tools for this task like Grammerly , Online Tool Site text converter etc ?