Where vs Were: What's the Difference? 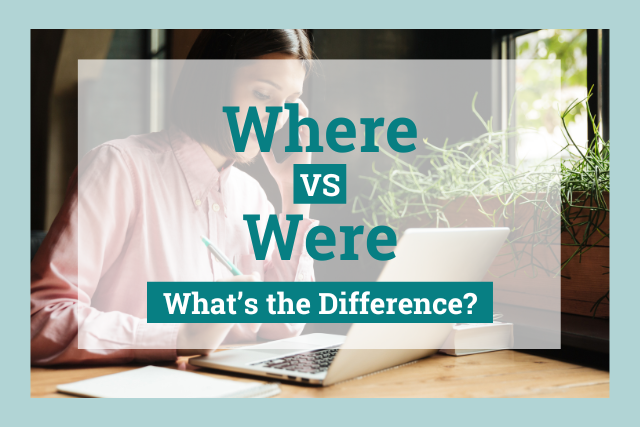 Were and where are two words that are easily confused, even by native English speakers. They look similar, but they are spelled and pronounced differently, and they have very different meanings.

So, when should you use each word?

The short answer is that were is a past tense form of be, while where means “in a specific place.”

Read on to learn more about where vs were and how to use these words correctly in your writing.

What’s the Difference Between Where vs Were?

The most obvious difference between where and were is that where describes a location, while were is a conjugation of the infinitive verb to be.

Let’s look at the definition and meaning of each word in more detail. 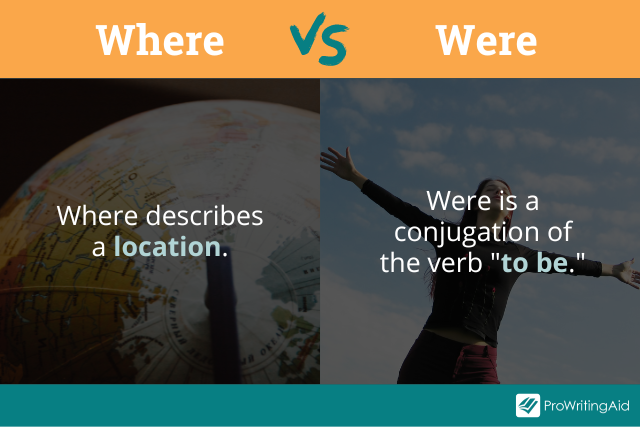 Were Definition and Meaning

Were is one of the past tense forms of the verb to be.

We use were as the simple past tense form when writing in the second person singular: “You were snoring so loudly last night!”

We also use were as the past form of to be when writing in third person plural or first person plural: “They were happy to see you at the party yesterday,” or “We were thrilled to receive your letter last week.”

Finally, in addition to the simple past tense, we also use were to indicate the past subjunctive tense, which we use to express something hypothetical or imagined.

For example, you might write: “If I were an animal, I think I’d be a giraffe,” or “She greeted them as if they were old friends.”

Where Definition and Meaning

Where is a word that refers to a specific, unknown place.

When it is used in a question to ask about a place or location, it’s a question word that’s used as an adverb or pronoun. For example, you might ask, “Where is my pen?”

As a conjunction, where means in or at a specific place or time. For example, you might say, “The pen is right where you left it.”

Sometimes, we also use where to talk about a metaphorical place, rather than a literal one.

For example, you might say, “He annoyed me to the point where I left the room.” In this case, where doesn’t refer to a literal location, just a point in a process.

Where vs Were Examples in Sentences

The best way to learn spelling and grammar is through examples! Here are a few example sentences of each word from English literature.

Examples of Were in a Sentence

“Libraries were full of ideas—perhaps the most dangerous and powerful of all weapons.”—Sarah J. Maas, Throne of Glass

“All grown-ups were once children... but only few of them remember it.”—Antoine de Saint-Exupéry, The Little Prince

“If all else perished, and he remained, I should still continue to be; and if all else remained, and he were annihilated, the universe would turn to a mighty stranger.”—Emily Brontë, Wuthering Heights

“So I walked back to my room and collapsed on the bottom bunk, thinking that if people were rain, I was drizzle and she was a hurricane.”—John Green, Looking for Alaska

“The Karands were a warlike race with little patience for cultural niceties.”—David Eddings, Demon Lord of Karanda

“I hate to hear you talk about all women as if they were fine ladies instead of rational creatures. None of us want to be in calm waters all our lives.”—Jane Austen, Persuasion

“We were five. You had on a red plaid dress and your hair... it was in two braids instead of one. My father pointed you out when we were waiting to line up.”—Suzanne Collins, The Hunger Games

Examples of Where in a Sentence

“I may not have gone where I intended to go, but I think I have ended up where I needed to be.”—Douglas Adams, The Long Dark Tea-Time of the Soul

“It isn’t what you have or who you are or where you are or what you are doing that makes you happy or unhappy. It is what you think about it.”—Dale Carnegie, How to Win Friends and Influence People

“But mostly, as much as I hate it, I can sense where the Thrall are.”—C.T. Adams and Cathy Clamp, Touch of Darkness

“The result was sloping tiled floors where an errant step up would meet three steps down.”—Christine Barber, The Replacement Child

“It’s a dangerous business, Frodo, going out your door. You step onto the road, and if you don’t keep your feet, there’s no knowing where you might be swept off to.”—J.R.R. Tolkien, The Lord of the Rings

There are several different tricks you can use for remembering how to spell where vs were correctly.

Because where and were sound different when spoken, one way to remember the difference is to focus on the pronunciation.

Another useful mnemonic for remembering the difference is to notice that where has an h for home, and home is a place. Therefore, if you’re writing about a place, you should use where with an h. 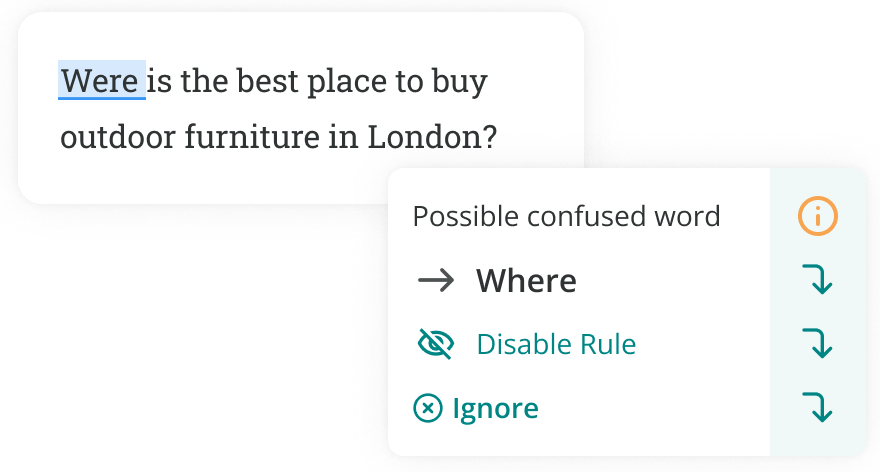 Finally, if you’re not sure you’re using the right word, you can always run your writing through ProWritingAid, which will catch tricky misspellings like “were are you” or “you where over there”!