This vs These: What's the Difference? 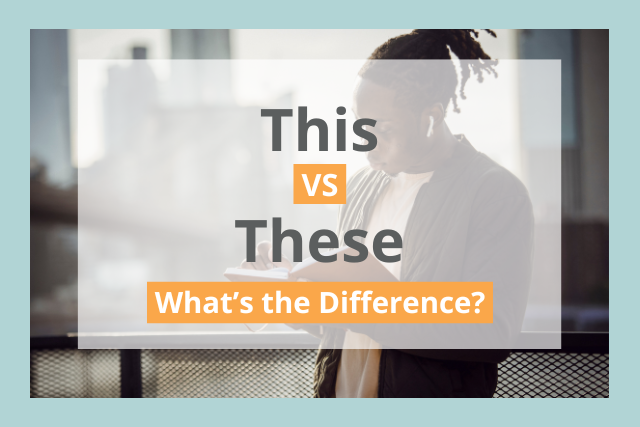 This and these are demonstratives, which means they indicate a specific noun in a sentence. They’re both important words in the English language.

Many people mix up this and these because they both refer to nouns that are near in space and time.

So what exactly is the difference between this vs these?

The short answer is that this is used with singular or uncountable nouns (e.g. this egg), while these refers to plural nouns (e.g. these cookies). 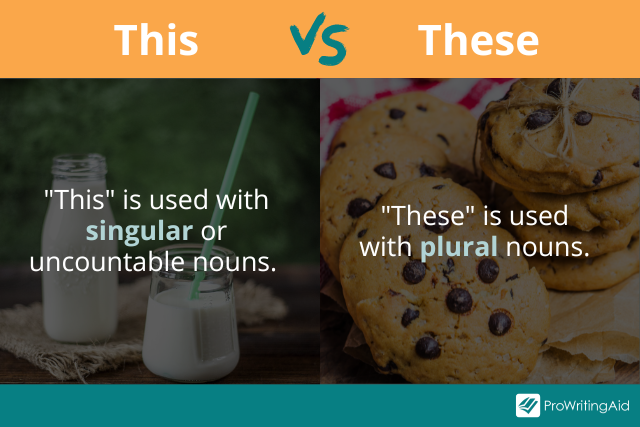 This article will explain the difference between this vs these and help you remember how to use these words correctly in your writing.

Quick Definition and Meaning of “This”

This refers to a singular noun that is near in time or space, such as a lamp or a desk.

If you say “I know this song,” for example, you’re most likely talking about the song that’s currently playing within earshot.

We also use this for uncountable nouns that we treat as singular, such as water, sugar, or happiness. For example, you might say “This water tastes funny” to talk about the water you’re currently drinking.

This is often used with words describing time, such as morning, week, and year. When used with these words, this can be used to talk about time in the present or in the near past or near present. For example, you could use the phrase “this afternoon” to refer to the afternoon of the present day.

It’s also important to remember that when the noun is omitted after this, it becomes a singular pronoun. If you say “I enjoyed eating this,” the word this refers to whatever singular dish you just ate.

Quick Definition and Meaning of “These”

These also refers to nouns that are near in time or space, but it is used for plural countable nouns. The noun that follows these must always be plural.

If you say “I don’t know any of these people,” you’re referring to more than one person, all of whom are near in time or space.

Just like this, these can be used as a plural pronoun if you omit the noun afterwards. If you say “Wow, I like these,” the word these most likely refers to whatever plural noun you’re referring to in the present moment.

What’s the Difference Between This and These?

Let’s take a look at some more examples of how to use this and these in a sentence.

Examples of These in a Sentence

Here are some examples of these used to refer to a plural countable noun:

Here are some examples of these used as demonstrative pronouns, with the noun omitted:

One of the best ways to learn a word is to see examples from literature in the real world. Here are some examples of these from popular English books:

Examples of This in a Sentence

Here are some examples of this used to refer to a singular noun or uncountable noun:

Here are some examples of this used to talk about time:

Here are some examples of this used as demonstrative pronouns, with the noun omitted:

Conclusion on This vs These

There you have it—a complete guide to this vs these. Here’s a quick recap: 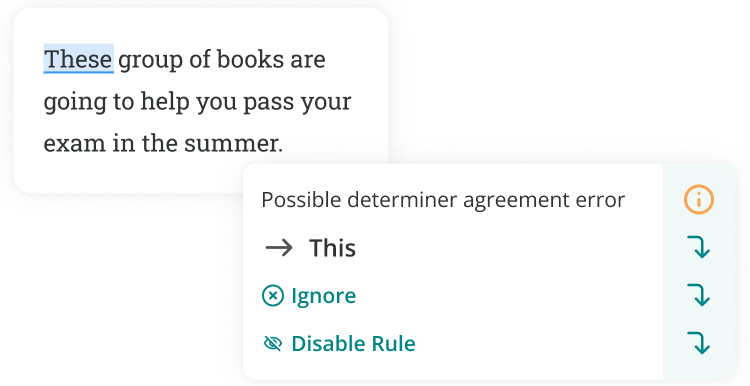 If you’re worried about mixing up this and these, you can always run your work through ProWritingAid, which will show you which one is correct. Our grammar checker will point out confused words and misspellings.

We hope this article helped you learn the difference between these two words!