To vs Too vs Two: What's the Difference? 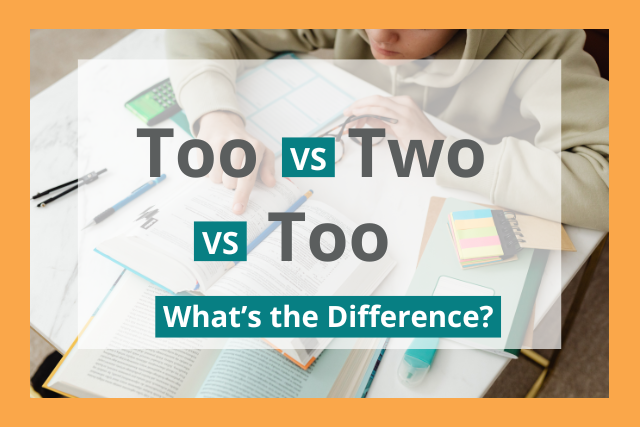 Three commonly confused words in the English language are to, too, and two. These three words are homophones, meaning that they’re pronounced the same way, but they’re all spelled differently, and they have very different meanings.

The short answer is that to is a preposition that indicates direction, too means also or indicates excess, and two is a number. 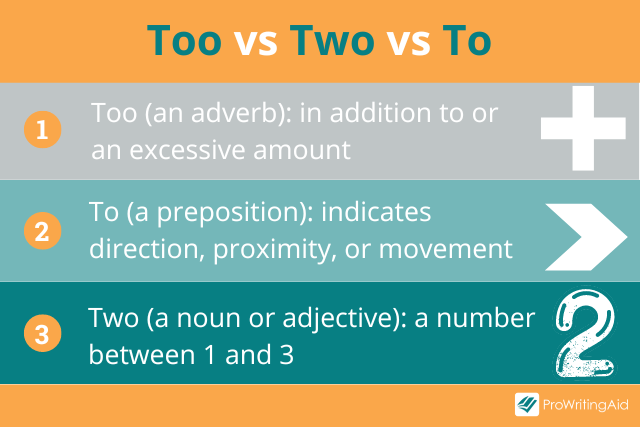 Read on to learn the distinct meanings of to, too, and two and to see examples of how to use these words in sentences.

Quick Definition and Meaning of “To”

To is a preposition with several meanings. Some of these meanings refer to proximity, distance, movement, location, and purpose.

Most often, to is used to indicate a direction toward something. If you say, “I drove to the office,” that means you drove in the direction of the office.

To can also be used with a verb to create its infinitive form. For example, you might say “I love to dance.”

To also expresses a range. For example, you might say, “I’ll be ready in five to ten minutes.”

Here are some other examples of when to use to:

Quick Definition and Meaning of “Too”

The word too is an adverb with two meanings.

The first meaning is also or in addition to. For example, you might say “If you’re going to the concert tonight, I want to come too.”

Too can also be used to indicate an excessive degree. It can mean something similar to very or an excessive amount. If you say, “The dish was too spicy for me,” that means you think the dish was excessively spicy.

Here are some other sample sentences of when to use too:

Quick Definition and Meaning of “Two”

Out of the three words to, too, and two, two is probably easiest to understand. Two only has one meaning: it’s the integer between one and three.

For example, you might say, “I have to leave in about two hours.”

Here are some other examples of when to use two:

What’s the Difference Between To vs Too vs Two?

To, too, and two all serve different roles in a sentence. As a general rule, you can remember their parts of speech to remember their separate meanings:

Whenever you’re expressing a number, you should use two instead of to or too. One tip is to remember that two starts with TW like the word twins also starts with TW, and twins refers to two children born at the same birth.

A good way to remember the difference between to and too is too has too many Os. Therefore, it’s used to indicate excess or addition. 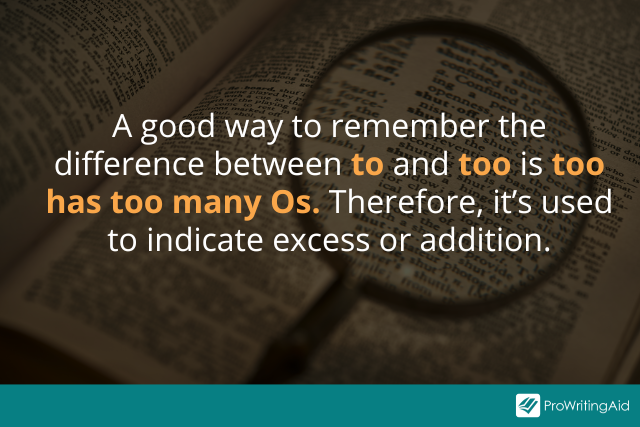 Examples of To, Too, and Two Used in Sentences

The best way to learn how to spell words correctly is to look at examples of how they’re used in the real world. Here are some examples of how to use to vs too vs two in a correct sentence.

Let’s start with some examples of to:

“Henry was invited to book launches and literary festivals around the world.”—Yann Martel, Beatrice and Virgil

“He pounded on the earth, trying to keep the hands from pulling him under.”—Roy Johansen, Beyond Belief

“I wanted to write, and just tell you that me and my spirit were fighting this morning.”—Peter Straub, In the Night Room

Now let’s look at some examples of too:

“By the time he decided to act, he’d been too late.”—Nora Roberts, The Heart of Devin MacKade

“The kitchen, too, disappeared under a pile of rubble.”—C.T. Adams and Cathy Clamp, Touch of Darkness

“The body holding the guitar in its hands has a name, too.”—Maurice G. Dantec, Grand Junction

Finally, here are some examples of two:

“Two roads diverged in a wood, and I—I took the one less traveled by, and that has made all the difference.”—Robert Frost, “The Road Not Taken”

“As you grow older, you will discover that you have two hands: one for helping yourself, the other for helping others.”—Sam Levenson, In One Era & Out the Other

“For the two of us, home isn’t a place. It is a person. And we are finally home.”—Stephanie Perkins, Anna and the French Kiss

Conclusion on To vs Too vs Two

Now you know the full difference between to vs too vs two.

If you’re not sure which spelling to use, you can always run your writing through ProWritingAid, which will highlight incorrect words and guide you toward the correct option. It’s great for picking up tricky homophones like these.