Then vs Than: What's the Difference? 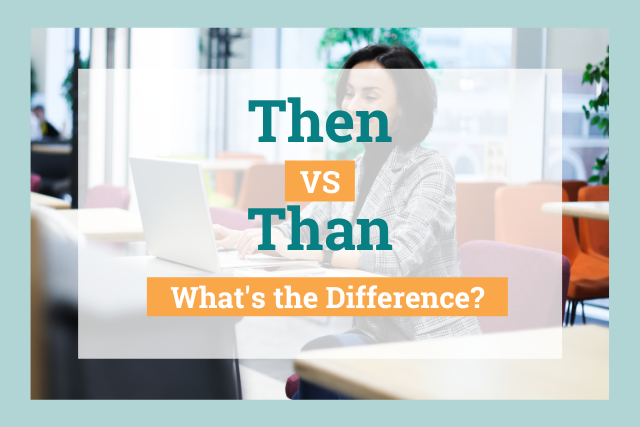 English includes many words that are so similar, they are easy to confuse. Homophones and homonyms make learning English difficult, whether you’re a native speaker or not.

Two of the most confusing words are then vs than, which sound alike but have entirely different meanings.

These two words aren’t rare. They are both one of the 100 most common words in the English language. That means you’re probably using them almost every time you write.

It’s therefore crucial to understand the difference between than and then.

So how do you remember the correct word choice? 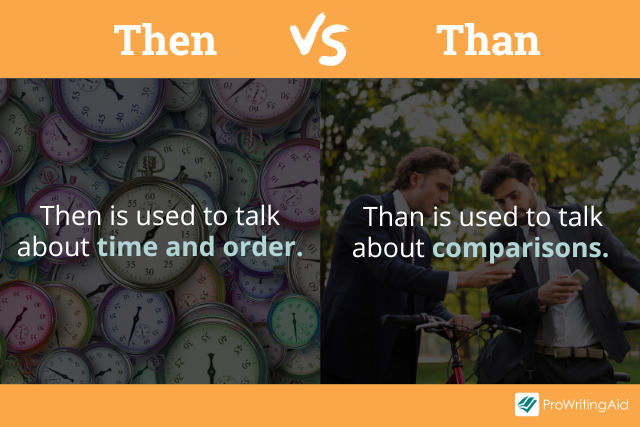 Let’s take a closer look at the nuanced differences between these two homophones.

What’s the Difference Between Then vs Than?

Similarly, you would say “I would rather marry for love than marry for money,” because again, you’re comparing two different possibilities.

In contrast, we use then to talk about time, order, and consequence.

You would also say, “If you don’t study, then you’ll get bad grades,” because you’re using then to describe the consequences of an earlier action.

ProWritingAid can help you ensure you are always writing the correct word. The Grammar Check and Realtime Report will catch most of the occasions that you mix up then and than.

We also have a Homonym report which detects homonyms and homophones.

The report can help you make sure you’re choosing the right word for your writing, rather than another word that sounds similar.

Examples of When to Use Then vs Than in a Sentence

The best way to learn grammar is through plenty of examples.

Take a look at the examples below to get a better idea of when to use than. Notice that all these sentences are making some kind of comparison.

Now, let’s take a look at the word then in some examples. Notice that then always has something to do with time, order, or consequence in all of these sentences.

Common phrases that include than are:

Here are some popular phrases that include then:

How to Remember the Difference Between Then vs Than

Another tip is to remember that the word than often follows comparative adjectives, such as taller, stronger, and bigger.

If you’re wondering which word to use, and you’ve just used a comparative adjective, you should probably be using than instead of then.

Finally, the word then is commonly used as a synonym for subsequently. If you’re not sure which spelling to use, you can try swapping the word for subsequently to see if you should be using then.

Using ProWritingAid is better than editing on your own, because every now and then a grammar error might slip past you!