Blog Grammar Rules Do You Need a Comma Before "such as"?

Do You Need a Comma Before "such as"?

English grammar can be tricky.

Alright, I know that’s like saying winter can be cold. But it’s true! Grammar has all sorts of exceptions that make questions like the one in the title important. Today’s question: How do commas work with the phrase "such as"?

In this article, we’ll answer that question and so many more. Let’s begin.

Is There a Comma Before or After "Such As"?

As with many English grammar questions, the answer varies. Look, I know it’s no fun coming to an article looking for a clear-cut answer and instead getting “it varies,” but it does.

Take these two sentences, for example:

NFL players such as Tom Brady are multi-time Superbowl Champions.

The NFL is full of legendary players, such as Tom Brady.

You’ll notice that in the above sentences, we have no comma before “such as,” yet it's there in the second sentence.

This is no error on my part—it’s all about restrictive and nonrestrictive phrases. (It’s funny answering one definition with another, but so it goes with the English language.) 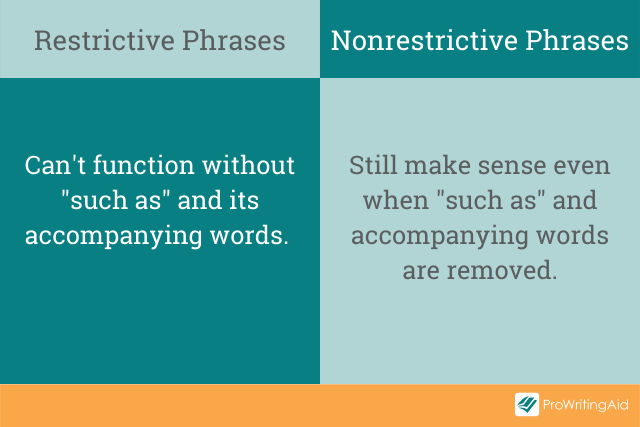 Let’s see how our phrases work when we remove Tom Brady from them.

The NFL is full of legendary players.

Now I’m sure fans of many NFL franchises would be much happier if Tom Brady was removed from the league. But as we can see, when we cut him from our first sentence, the meaning crumbles.

After all, not all NFL players are Superbowl Champions. Winning the Lombardi Trophy is an exclusive feat—which is kind of the point.

Now, what about our second example? As we can see, that statement is still true, even when we remove Mr. Brady; you can’t discount guys like Aaron Rodgers, Russell Wilson, and Daniel Jones (can you tell I’m a New York Giants fan?). 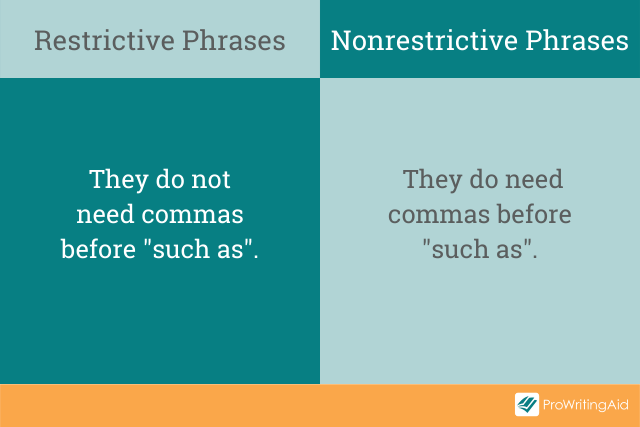 I’ll remove all the punctuation from the next three examples, just so we can try to puzzle them out.

Final sentence: I’m a big fan of frozen desserts, such as popsicles and ice cream.

For your own safety, large dog breeds should not sit on your lap.

First, those are words to live by. Second, this sentence still functions without “such as” and the rest, meaning it’s also a nonrestrictive phrase, meaning it needs some commas.

Final sentence: For your own safety, large dog breeds, such as Great Danes, should not sit on your lap.

Bands are known for playing loud.

Without the bands mentioned in our original sentence, this sentence isn’t quite accurate. Not every band is known for playing loud (me playing Rock Band in high school at three in the morning in my dad’s basement, for instance). Therefore, this is a restrictive clause without commas.

Final sentence: Bands such as The Who and Deep Purple are known for playing loud.

How and When to Include Commas After "Such As" 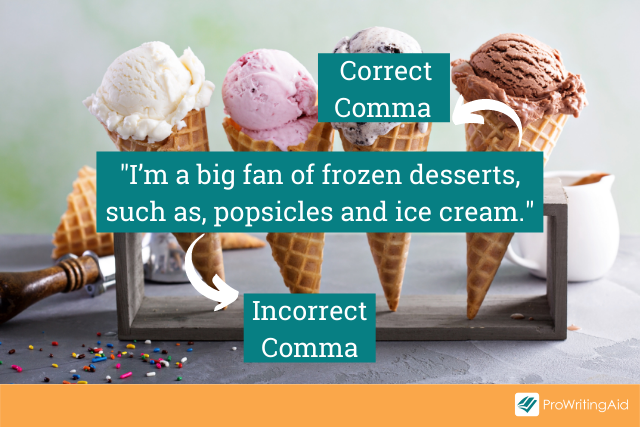 Before we proceed, you may have noticed we only partially answered the question in our heading. We know about commas before such as. But what about commas after such as?

Well, those are pretty rare. In fact, in my reading and research for this article, it was difficult to devise examples. In most sentences, a comma after “such as” would result in a comma splice.

There might be some corner-case scenarios where this is appropriate, but here’s a good heuristic: Commas might come before “such as,” but rarely, if ever, do they come after.

To avoid comma splices, try ProWritingAid's Grammar Report. In addition to those pesky splices, it also catches hidden problems such as using "a" after classification terms. 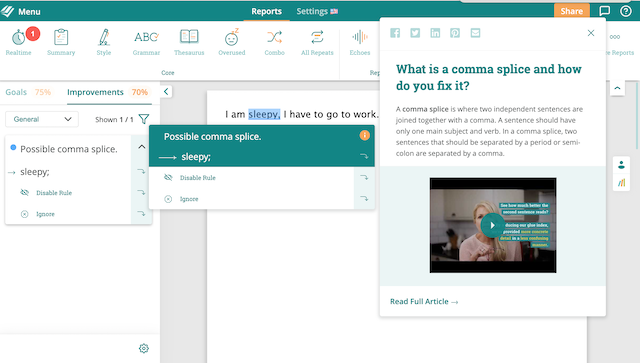 Semicolons and "Such As"

Do You Use a Semicolon After “Such As”?

Nope. Semicolons are most often used to link two sentences or independent clauses with similar topics. For example:

These two dogs are pals; they play together every day.

The semicolon is much more flexible than the average punctuation mark in that it’s often up to the writer’s discretion whether to use it. In the above example, for instance, a period would still be grammatically correct. However, I wanted to express a closer link between the clauses, so I used the semicolon.

But back to our initial question. As with commas, it’s going to be difficult to construct a sentence with a semicolon after “such as” without creating a splice. Though we can’t account for every instance, it’s safe to assume you’ll almost never see a semicolon after the words “such as.”

Should I Use a Semicolon Before “Such As”?

Still a no. Again, semicolons link sentences and independent clauses with similar topics, so you’re rarely, if ever, going to find a sentence that begins with “such as.” 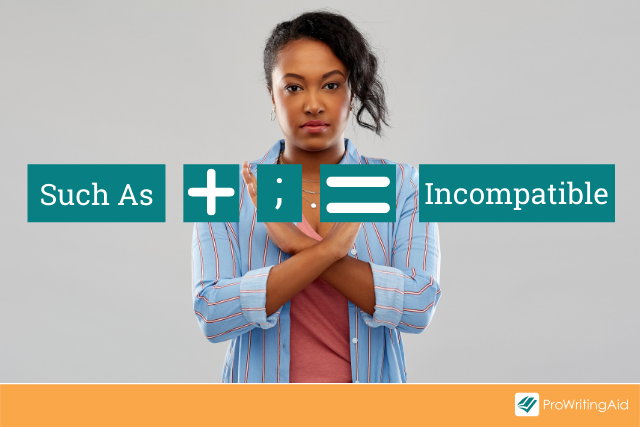 Should “In Fact” Be Set Off By Commas?

The words “in fact” actually follow many of the same rules as “such as,” which is why I mention them here. Take these examples:

“In fact” is almost always going to be preceded and/or followed by a comma or commas. Just be sure to follow the same rules of restrictive and nonrestrictive phrases. Let’s take a look at that first example to demonstrate.

My dog Osi is an English Springer Spaniel.

The sentence functions without “in fact,” so it’s a nonrestrictive phrase. That means the commas are necessary.

Using Commas with Other Common Phrases

This is another common question from practitioners of our titular phrase. Like our other examples, this will depend on the construction of the sentence in question. For example:

Many hobbits, such as Frodo, Sam, Merry, and Pippin, have hairy feet.

And of course, if we cut our “such as” clause, we get:

Many hobbits have hairy feet.

That sentence still functions, so you know the drill. It’s a nonrestrictive phrase, so the commas are necessary. (Just don't put a comma after "such as." Some writers mistakenly think that the rules change when listing. However, they do not.) 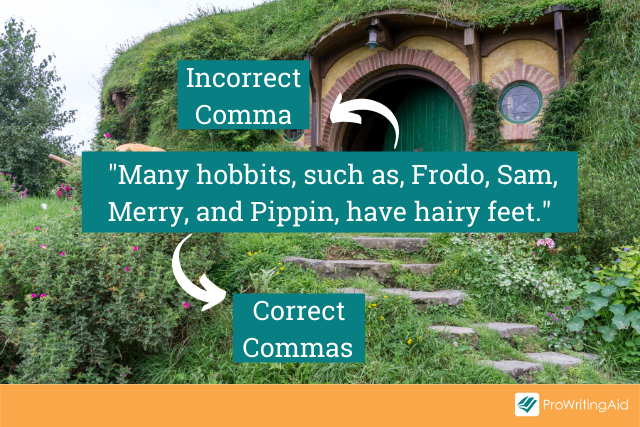 American states such as Alaska, Delaware, Montana, New Hampshire, and Oregon have no sales tax.

When we cut "such as" (and the list that follows it), the statement no longer functions.

American states have no sales tax.

I live in New York State, dear reader, so I can tell you from firsthand experience: we definitely have sales tax.

So, when listing items with “such as,” follow the same rules we discussed.

Do You Need a Comma Before “Including”?

Yep. Use the same rules that we use for “such as.”

Do You Need a Comma Before “Like” and “As Well As”?

Yes. As with “including,” “like,” and “as well as” follow the same rules as “such as.” However, though they are largely interchangeable, there are some differences that we should note.

“Like” is the least formal of the bunch. Take this sentence:

There’s nothing wrong with this sentence—it’s just informal, and therefore best suited to text messaging, personal blogs, and social media. (Also, notice that it's a restrictive clause, so no commas are needed.)

“Such as” is a step up in formality. I think we’ve seen enough examples of it to get the idea, so I won’t provide any more here.

“Including” is about the same level of formality as “such as.” However, its definition is slightly different. The New Oxford American Dictionary describes the distinction well:

“[Including can be] used in a nonrestrictive way, implying that there may be other things not specifically mentioned that are part of the same category, as in ‘the price includes a special welcome pack.’”

In the example provided in the dictionary, “such as” would be incorrect. And there are some sentences, such as the one about Civilizaton, where “including” wouldn’t work either. Use your writers’ instincts to determine which word best fits the situation.

Finally, “as well as” is probably the trickiest—and most formal—of the phrases mentioned in this section. Just try this sentence:

I’ve been to Prague as well as Paris, and let me tell you, the shopping in both places is magnificent.

Yes, this sentence sounds fancy. But, to paraphrase Strunk & White, it’s using needless words. A simple “and” would do the trick, as well as saving you two words. Whoops—now I’m doing it, too! 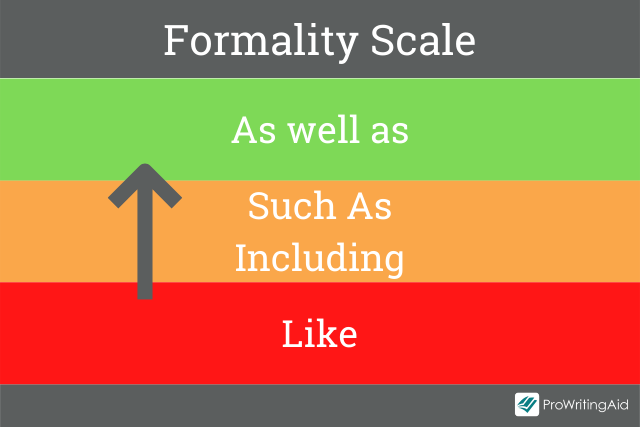 If you insist on using “as well as,” use those commas at your discretion.

Both these sentences are technically correct, so it’s up to the writer to employ the right one for their work.

Is “For Example” Synonymous with “Such As”?

"For example" and "such as" do not have the same meaning. “For example” most often kicks off a new sentence.

I’ve read many Kurt Vonnegut books. For example, I just finished “Breakfast of Champions” the other day.

Conversely, “such as” often flows naturally in one sentence.

I’ve read many Kurt Vonnegut books, such as “Breakfast of Champions.”

Be careful, because cramming “for example” into one sentence usually creates a run-on.

And “such as” usually doesn’t work correctly as a sentence starter.

I’ve read many Kurt Vonnegut books. Such as “Breakfast of Champions.”

As far as commas go, “for example” is always followed by a comma when you’re listing items afterward. However, it’s rarely preceded by a comma.

We hope you better understand the phrase “such as” thanks to articles such as this one. English Grammar may indeed be tricky—but you’re ready to use it, and use it well.