Comma Before "Except": When You Do and Don't Need One 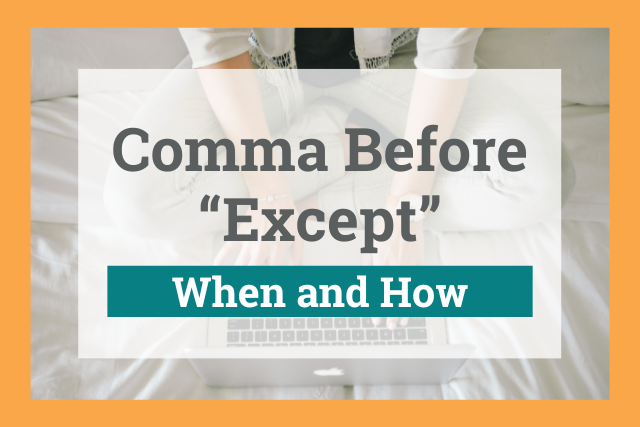 When deciding whether to use a comma before except, you must know which part of speech except is functioning as.

Today, we’re explaining how to determine the function of except in a sentence so you know how to use except comma rules correctly.

Even grammar experts make comma mistakes! You can always use a grammar checker to ensure you don’t use any unnecessary commas.

When Do You Need a Comma Before Except?

Except is an interesting word because it can be several parts of speech.

Sometimes, except acts as a conjunction in a sentence. When this is the case, you should use a comma before the word except. 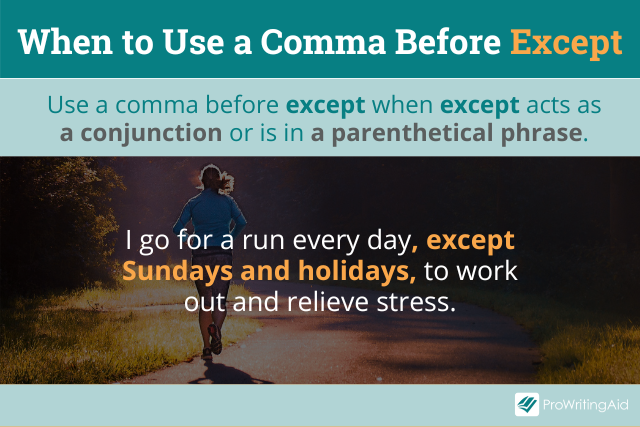 When a conjunction connects two independent clauses, place a comma before the conjunction.

In the example above, we could easily replace except with but.

Except doesn’t always separate independent clauses. Sometimes it acts as a subordinating conjunction or starts an adverbial phrase.

An adverbial phrase is a dependent clause that functions like an adverb: it modifies another part of the sentence such as a verb, adjective, or adverb.

When except is part of an adverbial clause, the words “when” or “that” often follow it. You should use a comma before except in these cases.

Sometimes, except sets information apart from the rest of the sentence. These parenthetical phrases are clauses inserted into a sentence.

However, even though we treat them as non-essential with relation to the comma rules used, removing parenthetical phrases including except will usually change the implicit meaning of a sentence.

Let’s look at an example:

You can see that we placed the commas on either side of the parenthetical phrase, “except Sundays and holidays.” This is the rule we mentioned above about non-essential entities in sentences.

But if we removed the parenthetical phrase, the implicit meaning of the sentence changes.

It suggests that the speaker goes for a run every day without exception. This makes it essential to the sentence, but we still place commas around the phrase as if it were a non-restrictive clause.

Remember: except is the exception to the restrictive and non-restrictive phrase rules.

Examples of Except Comma Rules

Let’s check out a few examples of when to use a comma with except. The first set are examples of except as a coordinating conjunction.

Here are some examples of except as a subordinating conjunction before adverbial phrases:

Finally, here are a few examples of parenthetical clauses inserted into sentences with except:

When Shouldn’t You Use a Comma Before Except? 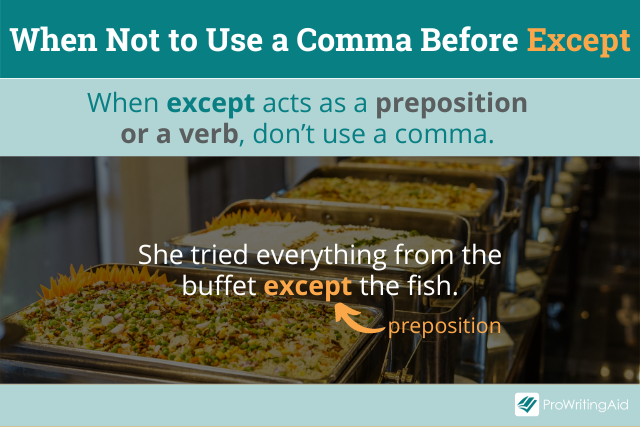 A preposition is a word that shows a relationship between nouns or pronouns and another element in a sentence. Prepositions usually precede a noun or pronoun.

To determine if except is acting as a preposition, you can look at the word directly after it.

If the word after except is a noun or pronoun or if it’s another preposition, particularly for, then except is a preposition. When this is the case, leave off the comma.

You might notice that the parenthetical elements in the previous section didn’t follow this rule. If except is acting as a preposition in a parenthetical phrase in the middle of a sentence, you should use commas.

But if it’s a prepositional phrase at the end of a sentence like the example above, no comma is necessary.

Finally, except is sometimes a verb that means to exclude or omit. Do not use a comma before except when it’s a verb.

Examples of Except and No Comma

Here are some examples of when you don’t need a comma because except is acting as a preposition:

And here are some examples of except used as a verb, which also does not require a comma:

To determine whether or not you need a comma before except, you just need to pay attention to the part of speech.

Remember, whenever except is a conjunction or in a parenthetical phrase, you need a comma. If except is a preposition or a verb, leave off the comma.