Skillset or Skill Set: Is It One Word or Two? 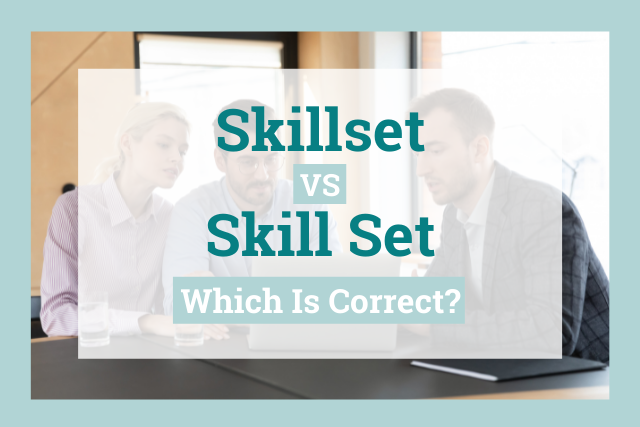 You’re preparing your resume for your dream job. You include a section on your skill set. Or is it your skillset? Or could it be skill-set?

Use the wrong version, and you’ll undermine any claims for possessing an impressive set of skills, especially if you’re seeking a position as a copywriter.

So what’s the right version? Is it skill set, skillset, or skill-set?

What’s the Definition of Skill Set?

Merriam-Webster defines skill set as a noun meaning “a set of skills.”

The included expanded definition is: “a collection of skills and abilities that can be applied to a professional or creative endeavor.”

Your skill set includes the abilities you possess that equip you to carry out certain tasks. 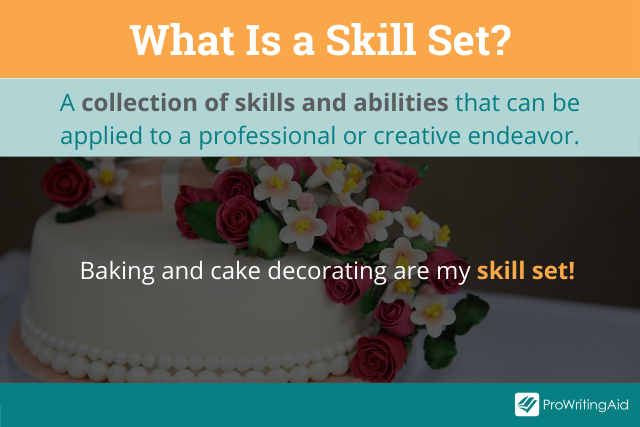 A person can have more than one skill set. If you’re applying for a job, emphasize the skill sets you have that fit the needs of that position.

For example, if you’re seeking a job in graphic design, your artistic and digital skills are part of the specific skill set which qualify you as a graphic designer.

Your abilities to write well, think critically, and work collaboratively, as well as your relevant personal qualities, represent your soft-skills, an asset to any professional situation.

The operative word is “set.” If you’ve mastered one skill, that’s great. If you cultivate a collection of related skills, that’s better.

In his New York Times article “Stop Trying to Master One Skill. Instead, Build a Skill Set,” Tim Herrera writes:

Instead of focusing your efforts on becoming singularly great at one specific skill or task, you should strive to get proficient at a few related skills that can be woven together into a wider skill set that does make you singularly good at your profession.

Consider your go-to “handyperson.” Their facility with tools, ability to take apart and rebuild, and knowledge of “how things in a house should work” represent a versatile skill set.

It’s better to have one reliable, multi-skilled person to call for those household chores than a list of individual experts. 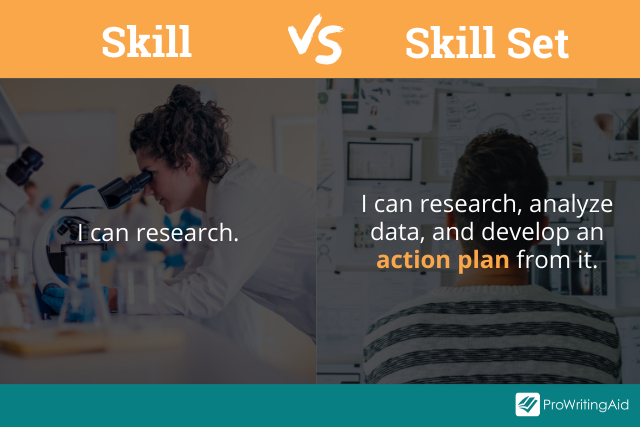 Skillset or Skill Set: Which Is Grammatically Correct?

Skill set is a noun phrase. A noun phrase is a group of two or more words that perform the function of a noun.

Not all words in a noun phrase have to be nouns. In skill set, “skill” is an adjective describing a type of “set,” which is the noun.

Compound words occur when two words are joined together to create one unit of meaning.

In open compound words, there is a space between the joined words. Examples of this include: living room, real estate, skill set.

How to Spell Skill Set: Should It Be Hyphenated?

Since skill set is an open compound word, the correct spelling includes a space between the words skill and set, but no hyphen.

That means both skillset and skill-set are incorrect spellings. The major dictionaries agree on this point.

If you conduct a search for the word skillset or skill-set on Merriam-Webster, Dictionary.com, and Cambridge Dictionary, you’ll be routed to entries for skill set.

These entries include neither skillset nor skill-set as alternative spellings nor definition entries for those versions of the term.

The Oxford Learner’s and Macmillan dictionaries will say, “no match for skillset. Did you mean…” and offer possibilities. Leading those options is the word skill set.

Google’s dictionary takes a slightly different approach. A Google search of the word skillset leads to a dictionary entry for skill set that also includes the skillset spelling.

Most respected sources recognize skill set, the open-compound version, as the only correct spelling of the term. It’s best to follow this large majority rule.

To keep yourself on the right track use ProWritingAid. Its Realtime Report will correct you if you use the hyphenated version in your work. 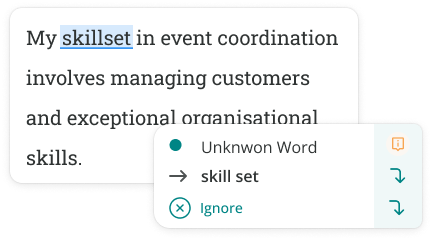 There is an organization in New South Wales called Skillset. If you’re writing about this organization, the correct spelling is the one-word Skillset with a capital “S.”

Just as most dictionary sources recognize skill set as the correct spelling, so do most published sources.

“Managing danger and fear is part of the skill set.”—The New York Times, “That Sigh You Hear...,” John Branch

“How to Develop Your Skill Set to Advance Your Career”—Indeed.com, Indeed Editorial Team

A Final Word on Skill Set

Are you writing a cover letter, resume, or article?

Are you editing someone else’s work? Whatever the case, if you must use the term, spell it skill set.

Though you may find examples of published work that uses skillset, those examples represent a significant minority, and many would still count that spelling as an error.

The bottom line is this: you won’t go wrong with skill set. That version always represents a correct spelling.