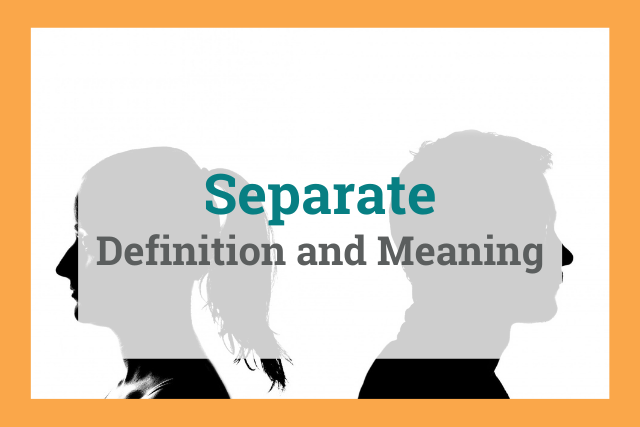 Separate is a versatile English word with many meanings, the most common of which is “to stop being together.” You can use this word in many different contexts, whether you’re writing an academic essay or a short story.

This article will explain what the word separate means, where it originates from, and how to use it in a sentence.

Separate can be either a verb or an adjective.

As an adjective, it means “set apart” or “existing by itself.” 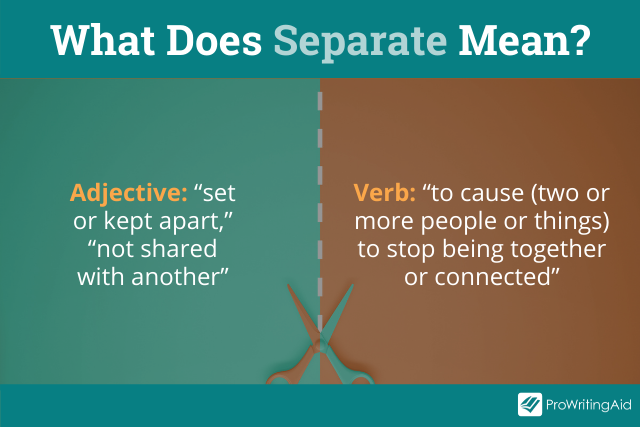 Let’s take a closer look at what each of these definitions means in practice.

As a verb, separate describes the act of causing two or more things to stop being together. Different synonyms for this word include “part,” “sever,” and “divide.”

Here are some other examples of how you can use separate as a verb:

As an adjective, separate means that two or more things are not the same. You can use this word as a synonym for words like “distinct” and “discrete.”

In a relationship, you might say you and your partner have separate bathrooms. At the office, you might point out that a colleague is combining two separate issues. In the kitchen, you might use a separate cutting board to chop your raw meat.

Here are some other examples of how you can use separate as an adjective:

Another Adjective Form of Separate: Separated

Here are some other examples of how you can use separated:

The difference between separate and separated can be a tricky one to remember. If you tend to mix up the two, you can try using a grammar checker like ProWritingAid to make sure you’re always using the right word.

Examples of Separate in a Sentence

Let’s look at some examples of the word separate in popular English books.

“He listened to Roark silently, and his eyes were like a stopwatch registering each separate second consumed by each separate word of Roark’s.”—The Fountainhead by Ayn Rand

“Long before he died, November’s father was gone, up north, away from his wife and the sea. They could not bear each other, in the end, and perhaps a thing begun in blood and death and salt must end that way. They could not live with less than three mountain ranges to separate them.”—Palimpsest by Catherynne M. Valente

“I no longer considered my body my own. It had ceased to belong to me. My hands, moving, felt separate, floating of their own accord, and when I stood it was like operating a marionette, unfolding myself, rising jerkily on strings.”—The Goldfinch by Donna Tartt

“You want to know how to paint a perfect painting? It’s easy. Make yourself perfect and then just paint naturally. That’s the way all the experts do it. The making of a painting or the fixing of a motorcycle isn’t separate from the rest of your existence.”—Zen and the Art of Motorcycle Maintenance by Robert M. Pirsig

“Someone has said, when you are born into this world there are at least two of you, but going out you are on your own. Death happens to every one of us, yet it remains the most solitary of human experiences, one that separates rather than unites us.”—What Are You Going Through by Sigrid Nunez

“But the magnitude, the depth of his wife’s grief for their son exerts a pull. It is like a dangerous current that, if he were to swim too close, might suck him in, plunge him under. He would never surface again; he must hold himself separate in order to survive.”—Hamnet by Maggie O’Farrell

“The calendar separates today from yesterday and tomorrow, but in life there is no distinguishing past, present, and future. We all have an enormity of time, too big for one person to deal with, and we live, and we die.”—Tokyo Ueno Station by Miri Yu

“Power can’t be separated from its history. A choice can’t be taken in isolation from its context.”—The Tyrant Baru Cormorant by Seth Dickinson

Origin of the Word Separate

Now you know what the word separate means and how to use it. We hope this article helps you separate your writing from the rest of the crowd!