The passing of Queen Elizabeth II is the end of a rich legacy. No matter your personal views, there’s no denying she left an impressive mark on the world during her historic reign.

In more than seventy years on the throne, Queen Elizabeth II made many memorable speeches.

In this article, we’re taking a look at the queen’s best speeches and how she used rhetorical devices to make a lasting impact.

Queen Elizabeth started out her reign with a memorable speech. Let’s check out the opening paragraph:

The ceremonies you have seen today are ancient, and some of their origins are veiled in the mists of the past. But their spirit and their meaning shine through the ages never, perhaps, more brightly than now. I have in sincerity pledged myself to your service, as so many of you are pledged to mine. Throughout all my life and with all my heart I shall strive to be worthy of your trust.

A strong opening for a strong queen. In the opening sentence, Her Majesty uses imagery, which is often overlooked as a rhetorical device by speechwriters. “Veiled in the mists of the past” captivates the audience with a vivid description.

Her Majesty contrasts this imagery in the next sentence: “shine through the ages… more brightly.” This contrasting picture shows her hope for a better future under her rule.

The third sentence uses parallelism, which is a common tool in great speeches. The lyrical flow of parallel syntax provides emphasis.

Queen Elizabeth says she has “pledged myself to your service, as so many of you are pledged to mine.” The parallelism emphasizes her point that the Queen’s relationship with the Commonwealth is not one-sided: she serves the people as much as they serve her. 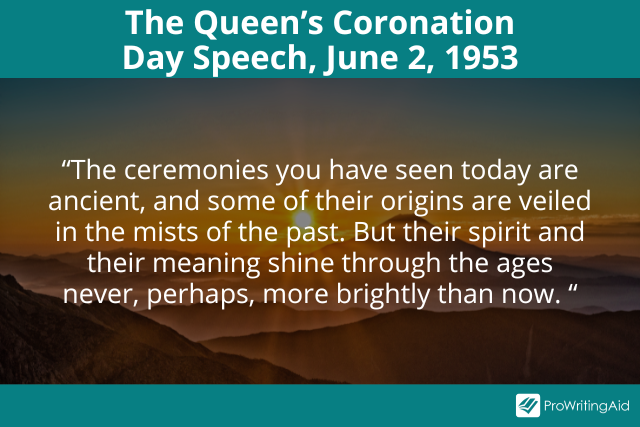 While the opening of Parliament might not sound like the most exciting event to most people, Her Majesty turned a dry list of achievements and goals into something great. Here’s an excerpt of her speech.

My Government will endeavour to improve the protection of the community against crime. The strength, efficiency and well-being of the police will be their continuing concern; and they will seek to make more effective the various methods of penal treatment…

Legislation will be introduced to provide for a levy on horse-racing and, in England and Wales, to check abuses by registered clubs and to reform the licensing laws.

Authority will be sought for an increase in the number of judges in the Supreme Court.

My Government will persevere with measures to promote economic growth in the Highlands and Islands and to develop modern standards of living there; and they will put forward legislation to amend the Crofters (Scotland) Act.

A Bill will be introduced to extend the investment powers of trustees.

Legislation will be laid before you to amend the Weights and Measures Acts.

Legislation is being prepared to provide financial assistance towards the construction of a new Atlantic liner to replace the Queen Mary.

Throughout the entire speech, Queen Elizabeth uses anaphora, which is the repetition of sentence beginnings. She uses the phrases “My government will” and “Legislation will be” many times.

Why is this effective? While anaphora is generally used for emphasis, it serves a different purpose here. It creates a rhythm to a speech that is, essentially, a long list. This makes it more engaging and demonstrates her determination to work as a team with Parliament.

Centenary of the Entente Cordiale, April 5, 2004

In 2004, Queen Elizabeth visited France to celebrate a century of good relations, after nearly a millennium of conflict and adversarial association. Let’s look at part of this speech:

But since 1815 our two nations have not been to war. On the contrary, we have stood together, resolute in defence of liberty and democracy, notably through the terrible global conflicts of the 20th century.

We are both reminded that neither of our two great nations, nor Europe, nor the wider western alliance, can afford the luxury of short-term division or discord, in the face of threats to our security and prosperity that now challenge us all.

Of course, we will never agree on everything. Life would be dull indeed, not least for the rest of the world, if we did not allow ourselves a little space to live up to our national caricatures—British pragmatism and French elan; French conceptualism and British humour; British rain and French sun; I think we should enjoy the complementarity of it all.

Her Majesty had a sense of humor, and she used this humor in her address.

To break up her discussion of their serious past and uncertain future, she jokes about their differences. She notes that life would be dull, especially for everyone else in the world who makes fun of the French and the British. She even discusses their different weather.

She uses parallelism and repetition to illustrate their differences while adding some cheer. It was a momentous occasion, and cause for celebration, which makes the Queen’s humor even more powerful.

It was hard to choose an excerpt from Queen Elizabeth’s address at the beginning of the COVID-19 pandemic because the entire speech was powerful and inspiring.

Below is one of many brilliant excerpts. This one uses an interesting rhetorical device.

I hope in the years to come everyone will be able to take pride in how they responded to this challenge. And those who come after us will say the Britons of this generation were as strong as any.

That the attributes of self-discipline, of quiet good-humoured resolve and of fellow-feeling still characterise this country. The pride in who we are is not a part of our past, it defines our present and our future…

It reminds me of the very first broadcast I made, in 1940, helped by my sister. We, as children, spoke from here at Windsor to children who had been evacuated from their homes and sent away for their own safety. Today, once again, many will feel a painful sense of separation from their loved ones… 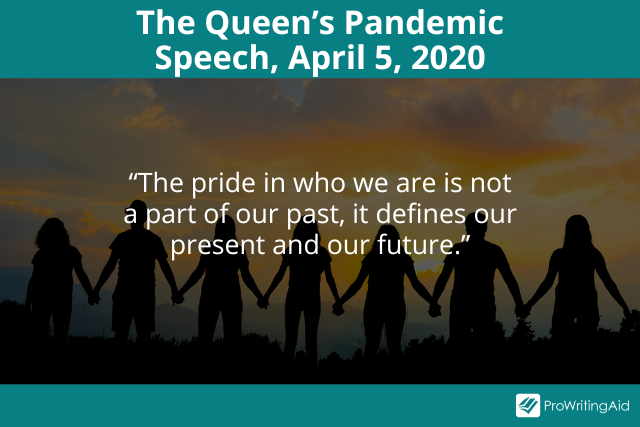 Queen Elizabeth talks about pride, and she emphasizes this point using alliteration. The second paragraph of this excerpt has multiple examples of alliteration, such as “fellow-feeling” and “characterise this country.”

She continues into the next sentence by accentuating the /p/ sound of pride with “part,” “past,” and “present.” She leaves no doubt that she is proud of her people, and they should be proud of themselves.

Interestingly, she also uses allusion to her very first broadcast speech. She addressed the children of Britain, and their families, in a time of fear and uncertainty amid the bombings of World War II.

Now that we know Her Majesty’s remaining time was short, this allusion is even more powerful. It’s a full-circle moment of her legacy, a symbol of hope for millions of people through dark times.

The Queen and her speeches will be missed. As writers, we look forward to seeing a new era of royal rhetoric.