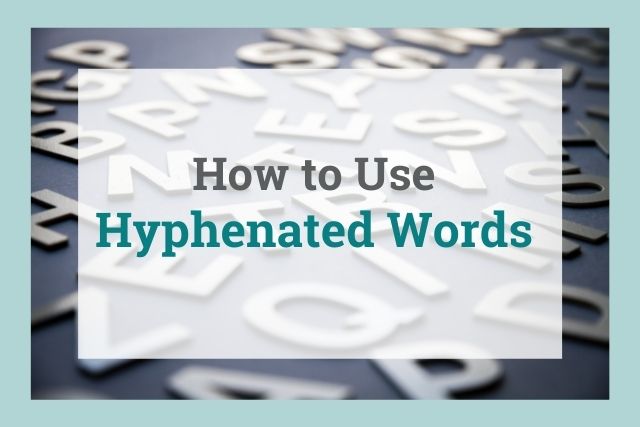 What Are Hyphenated Words?

A hyphenated word is a word that contains at least one hyphen. Typically, hyphenated words are compound words, which means the hyphen connects two or more words.

There are other uses of hyphens that we use in writing that aren’t compound words. We’ll cover these examples later in this article. 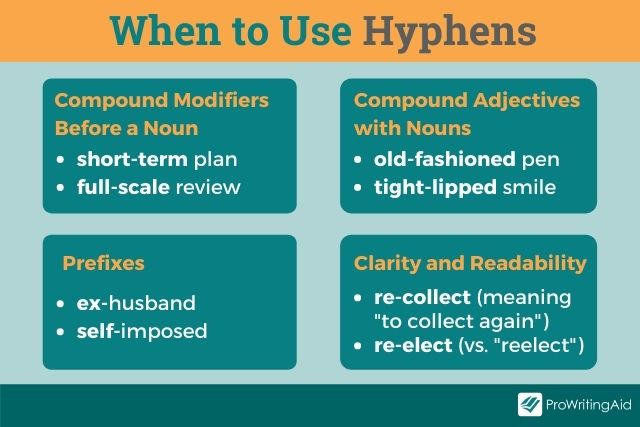 When to Use Hyphenated Words

We use hyphens to combine certain types of words. These include compound modifiers, such as adjectives and participles. We hyphenate many numbers when they are spelled out in word form, like twenty-one.

Sometimes, we hyphenate words after prefixes, but not every prefix requires a hyphen. How do you know which ones to use? We’ll cover these in more detail in a later section.

Hyphens can also help our writing become clearer. This means that occasionally, we can add hyphens where they aren’t required grammatically. Sometimes, that little punctuation mark can make a huge difference in improving clarity and readability. 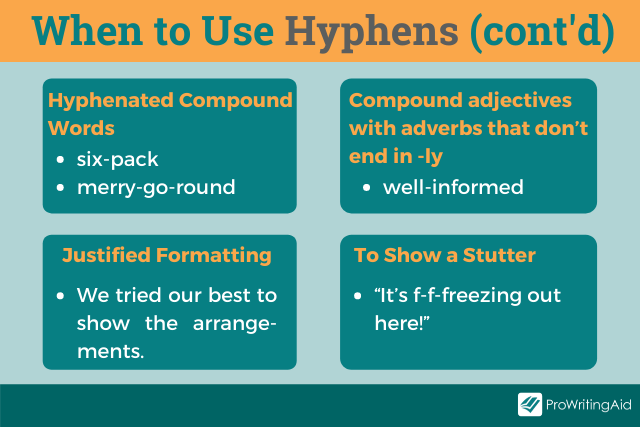 Keep reading for detailed explanations of how and when to use hyphens in your writing.

Many people confuse hyphens and dashes. We even say dashes when we’re using hyphens in web addresses, which makes things even more confusing.

But in English grammar, hyphens and dashes are very different. A hyphen is one short, horizontal line. You can find it next to the 0 on a QWERTY keyboard.

English also has two types of dashes, the en dash and em dash. The em dash (—) is a punctuation mark used between words to break apart thoughts or ideas within a sentence. It’s the length of two dashes.

The en dash (–) shows ranges between numbers, dates, etc. It’s wider than a hyphen and narrower than an em dash.

Many people use hyphens when they should use en dashes, or they’ll use two hyphens in place of an em dash. But these are three distinct punctuation marks and are not interchangeable. 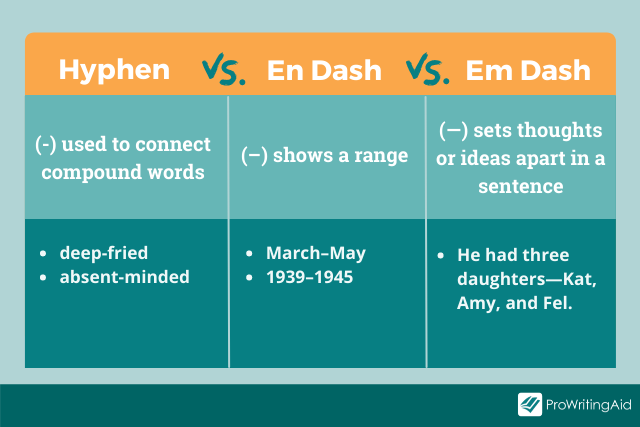 Rules to Follow: What Words Should and Shouldn’t Be Hyphenated?

Sometimes when we describe a noun, we use two or more words together in place of one adjective. We call these compound modifiers. You might also hear them called compound adjectives.

There are several types of compound modifiers. One type is adjective + noun (or noun + adjective). We usually hyphenate these words. Here are some examples:

Another type of compound adjective combines an adjective with a past participle:

Adjectives can also combine with a present participle:

Nouns can also combine with past and present participles by using a hyphen to make a compound modifier:

Some hyphenated compound modifiers are two adjectives, like the examples below:

There are also hyphenated compound modifiers that include adverbs, but these get tricky. We’ll cover adverbs in a later section.

In English, we hyphenate many two-digit numbers in their written form. Any base-ten higher than twenty plus an integer one through nine is hyphenated. What does this mean? Here are some examples:

Let’s look at an example of a large number, so you can see where the hyphen goes:

Notice that we do not hyphenate “two hundred.” We also don’t need the word “and” because in mathematics “and” denotes a decimal. Outside of math, we can place the word “and” to mimic how many people speak. It would look like this:

What about even bigger numbers? Here’s an example: 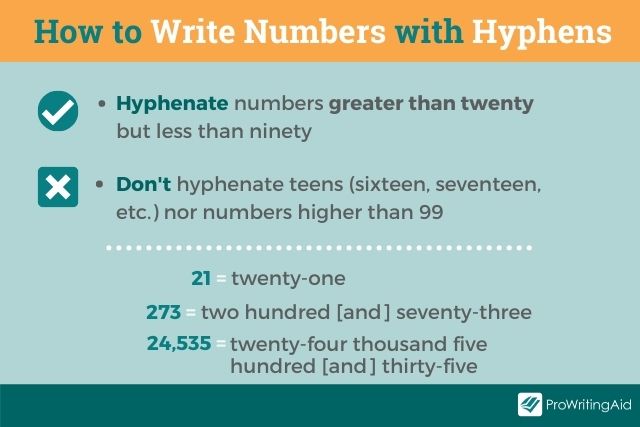 Once again, the “and” is optional. Our hyphenation rules remain the same no matter how large the number gets.

If it’s read like a base-ten plus a number (e.g. twenty-four), we hyphenate. The words “hundred,” “thousand,” “million,” and so on, do not need hyphens.

Some compound modifiers contain numbers. These might be periods of time or ages. We hyphenate any compound adjective that contains a number if it precedes a noun. Here are some examples:

Always ask yourself how the phrase is functioning. If it’s a compound adjective that contains a number, use a hyphen!

Prefixes are letters or words that attach to the beginning of a word to make a new word. Usually, we do not need to add hyphens after prefixes. However, some prefixes require a hyphen.

When we use the prefix “ex-” to mean “former,” we use a hyphen. Ex- has several meanings as a prefix, and some do not require a hyphen.

If you aren’t sure, try replacing the prefix with the word “former.” If it still makes sense, add a hyphen. If not, the hyphen is probably unnecessary.

So, you wouldn’t need it for words like “excommunicate.” The meaning of the prefix is different.

If you’re using “self-” as a prefix, always add a hyphen. Don’t confuse this with the root word “self” that stands alone as a noun! Here’s what it looks like as a prefix.

You can think of these as compound modifiers instead of a prefix if it helps you remember to use the hyphen.

Likewise, if you’re using “all-” as a prefix, it functions like a hyphenated compound modifier. Let’s look at some examples:

You should also hyphenate words that have prefixes before capitalized words, such as “un-American,” “pro-Palestinian,” or “post-Depression era.”

Some words that contain other prefixes have hyphens, but these will occur on an individual basis rather than as a hard and fast rule.

Just when you think hyphenating words was easy once you learn the rules, you find out that some hyphenation rules are optional!

Every now and then, you might write a word that is difficult to read without a hyphen. This often occurs when a prefix shoves two identical letters together.

In these situations, you can add a hyphen to make your writing easier to read. Words like “pre-eclampsia” or “re-elect” are easier to read with the hyphen, even though it’s not necessary.

Hyphens can also help ensure that readers emphasize a syllable correctly to avoid confusion with another word. “Re-collect” will tell the reader you mean “to collect again” rather than “recollect” or “remember.”

Adverbs often combine with other words to form compound modifiers. Sometimes, we need hyphens. Other times, we don’t. How do you remember when to use a hyphen with an adverb?

If the adverb ends in -ly, do not use a hyphen. Take a look at these examples:

But not all adverbs end in -ly. Here are some examples of compound modifiers with adverbs that do need a hyphen:

If you aren’t sure when to use a hyphen with adverbs, ProWritingAid can help. The Grammar Report will point out missing and unnecessary hyphens.

Open compound words include words such as coffee table, dining room, high school, ice cream, and peanut butter. There’s a space between these words, but both parts of the word are necessary. Peanut and butter are two different things than peanut butter.

Some compound words used to be hyphenated but eventually the hyphen went out of fashion.

Hyphenated compound words use a hyphen to connect the words. Here are some examples:

Hyphenated compound words like this differ from compound modifiers because they are nouns that are always hyphenated. They don’t function as adjectives or modifiers.

Other Uses of Hyphens in Writing

Hyphens have other uses in English writing, too. They don’t always form new words or connect parts of speech. Sometimes, they are used for formatting purposes.

When we justify text, or line up both margins, words can get cut off. While you can place a long word on the next line, this can look messy and uneven, particularly in books. Hyphens are used to cut words off between lines.

Hyphens can also denote a stutter or stammer in dialogue, as in this example:

These are formatting rules more than grammar rules, but it’s important to know that we can use hyphens in this way.

Conclusion on Words with Hyphens

Hyphens are a tiny punctuation mark that nonetheless pack a punch. Always ensure you are using a hyphen instead of an en dash or em dash when hyphenating words.

Remember to use hyphens in most compound modifiers, and always run your writing through an editing program like ProWritingAid to catch any hyphen errors.