Em Dash vs. En Dash: Get Them Right 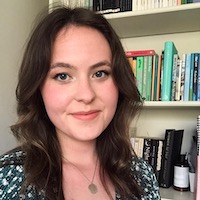 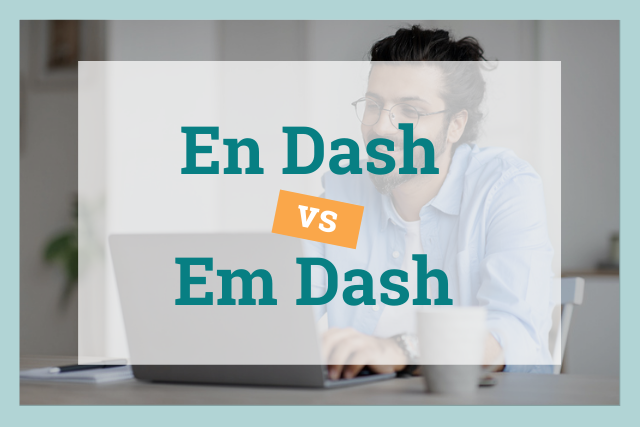 A dash is a dash, right? Unfortunately, it's not that simple.

The em dash and en dash are both dashes, but there are some key differences between them.

The first is the width of the dash. The em dash (—) is the long dash—it’s roughly the same length as a capital M. The en dash (–) is shorter, taking up the same space as a capital N.

Different situations require different types of dashes. Let’s take a look at how these two dashes are used and explore some examples of when to use em dashes vs en dashes.

When Do I Use an Em Dash?

Are you getting bored with commas, parentheses, colons, and semi-colons? The em dash might be your new best friend.

The em dash can replace each of these punctuation types. The main thing to remember is that you shouldn't leave a space on either side of the dash.

But why do authors use em dashes rather than standard punctuation?

The em dash helps improve readability by suggesting a longer pause. Take a look at these examples.

In the second example, the end of the sentence really stands apart from the first part.

That longer pause lets your reader know that there is a reason Ryan is not invited, and that the reason is something they should want to know more about.

The first example tells us the same information, but it doesn’t intrigue your reader in the same way. 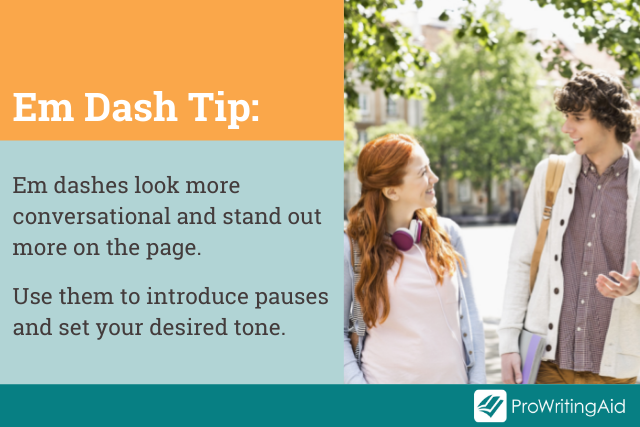 The same goes for non-fiction examples:

If you want to make a statistic or fact stand out, an em dash can help. In this example, the em dash helps link the two clauses, but the pause creates a greater sense of cause and effect.

Some writers use two em dashes to show filtered or censored words in their text. This might be redacted information or unsavory language:

If you’d like to learn more about how to replace punctuation with em dashes, check out our complete guide to the em dash.

When to Avoid the Em Dash

Some editors love the em dash, others might be tempted to annotate your work with this: 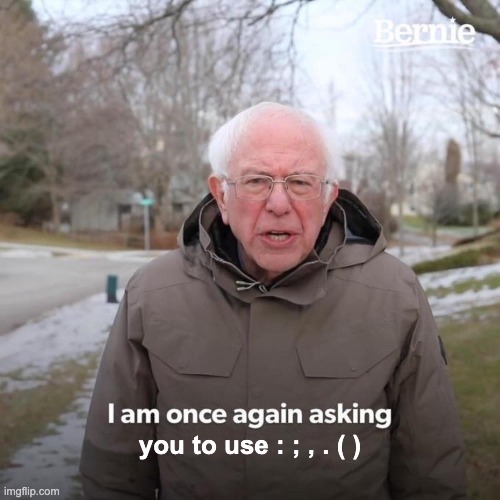 Using the em dash in place of standard punctuation is widely considered to be less formal.

If you’re writing an academic paper, an article, or anything else that has a traditional style guide, it’s probably best to double check before you get too heavy-handed with your em dashes.

However, if you’re writing something informal—like a blog post—using em dashes can create a more conversational tone.

How to Use Em Dashes with the AP Style Guide

Remember when we said not to put spaces around your em dashes? If you're writing in the AP style, you need to turn that on its head.

Journalists writing in newspapers and magazines should add a space either side of the dash, like this:

Mr. Jones — leader of the opposition — is thought by many to have won the debate. 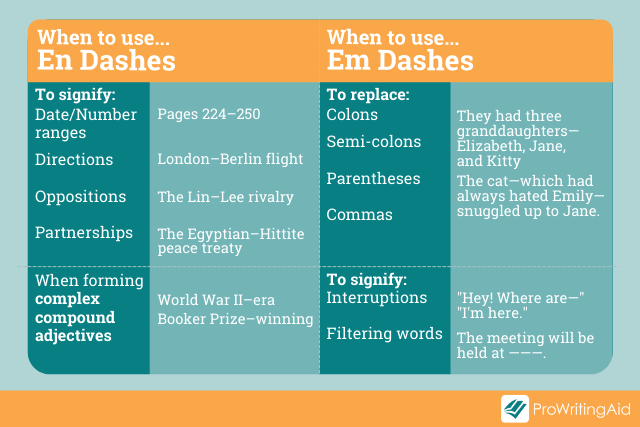 When Do I Use an En Dash?

The en dash has a few more uses. It is used to show date and number ranges, as well as to form complex compound adjectives.

Your first question is probably "What on earth is a complex compound adjective?" Let’s break it down.

A compound adjective combines two or more adjectives into one. For example:

As you can see, regular compound adjectives use a hyphen to combine words.

However, if one of the adjectives already has a space or a hyphen in it, some writers like to use an en dash for extra clarity. 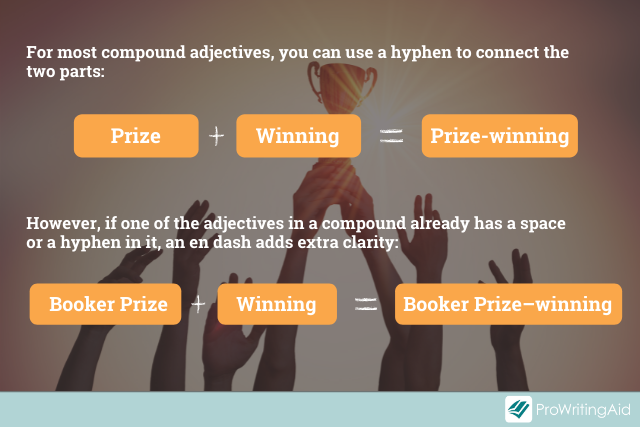 When you see an en dash between two numbers or dates, it means to or through. Here are some examples:

Wondering how to format a sports score? Use an en dash:

You’ll also use en dashes between directions and destinations:

En and Em Dashes in UK English vs. US English

If you're writing for a British audience, the rules are a little different. The convention in UK English is to use an en dash with a space either side instead of an em dash in most cases.

That means that the em dash examples above:

One downside to space travel is the extortionate cost—one astronaut's space suit can cost $12 billion.

Janet really didn’t want the boys to come to her party—especially not Ryan.

One downside to space travel is the extortionate cost - one astronaut's space suit can cost $12 billion.

Janet really didn’t want the boys to come to her party - especially not Ryan.

One place where British writers do use the em dash is in dialogue.

As before, the em dash can signal an interruption in dialogue:

In some instances, authors use one em dash at the beginning of each new line of dialogue instead of quotation marks:

— What's the ETA on the extraction team?

— Can't they go any faster?

This method is a stylistic choice. You might use it to increase the pace and emphasize the back and forth in a conversation, or to report speech in a fictional log

In the example above, you can work out that there are two speakers from context. However, if you introduce more speakers, this could get confusing. Take the time to work out what the best style is for your readers.

So, now you know how to use en and em dashes, let’s recap the main differences (with a few more examples).

Em dashes are used in place of standard punctuation such as the comma, parenthesis, colon, and semi-colon:

They can also show an abrupt change in direction or an interruption: 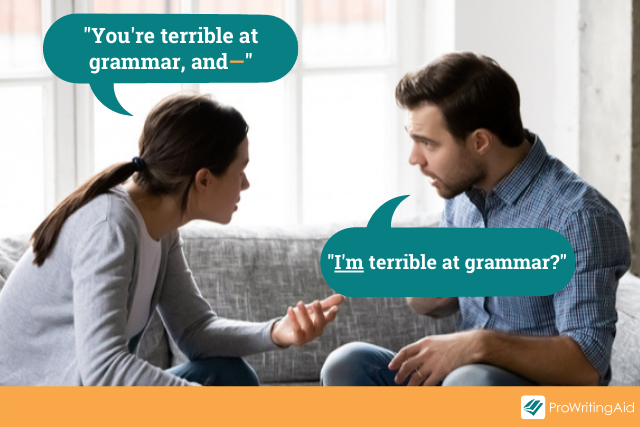 How to Type En and Em Dashes

You may have noticed that em and en dashes aren’t represented on a standard QWERTY keyboard.

One way to insert em and en dashes is through your symbols menu.

On Mac, you can hit Ctrl + Shift + Space to bring up the symbols menu.

On Windows, you can use the Windows key + ;

Scrolling through a symbols menu can take a while, though, so it’s also useful to know some handy keyboard shortcuts for em and en dashes.

Use the numerical pad to type these en and em dash shortcuts for Windows:

It's a little simpler for Mac users. Use these keys to type en and em dashes on Mac:

How to Type Dashes in Microsoft Word

In most word processors, you can type two hyphens and then a space. Word (and other programs) will automatically convert this to an em dash.

For an en dash, type a space, a hyphen, and then another space. 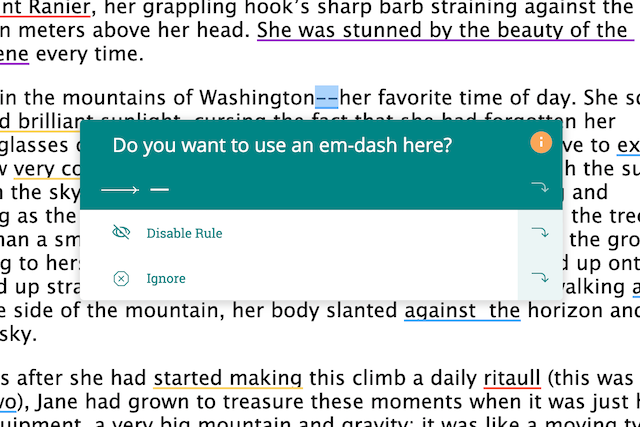 Download the ProWritingAid extension for your browser to start writing well wherever you write.

Now you know the difference between en and em dashes, you’re ready to start using them correctly in your writing. Whether you’re looking to improve readability or make sure you’re using the right formatting for dates and compound adjectives, dashes are there to help you out.

Looking for more on dashes? Wondering where hyphens fit in? Our complete guide to em dashes, en dashes, and hyphens has you covered.