Concave vs Convex: What's the Difference? 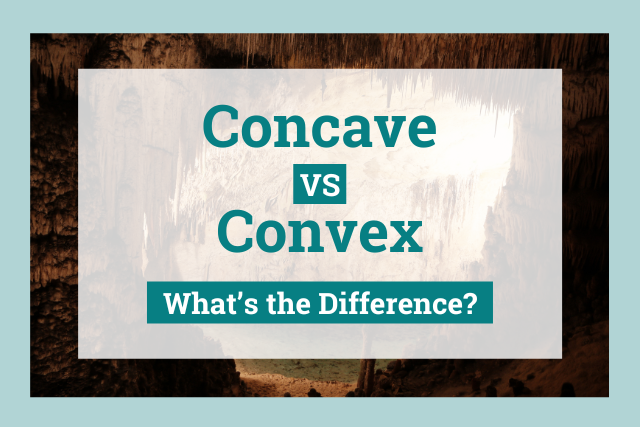 Many people mix up the words concave and convex.

Concave and convex are opposites. So how do you remember the difference?

This article will explain the difference between concave and convex in more detail, and help you remember when to use each term.

What Is Convex and Concave?

Let’s look at the definition and meaning of each word in more detail.

Definition and Meaning of Concave

The adjective concave is used to describe any shape that curves inward.

When we say something has a concave shape, we mean it has a shape like an empty bowl or the inside of an ice cream scoop. 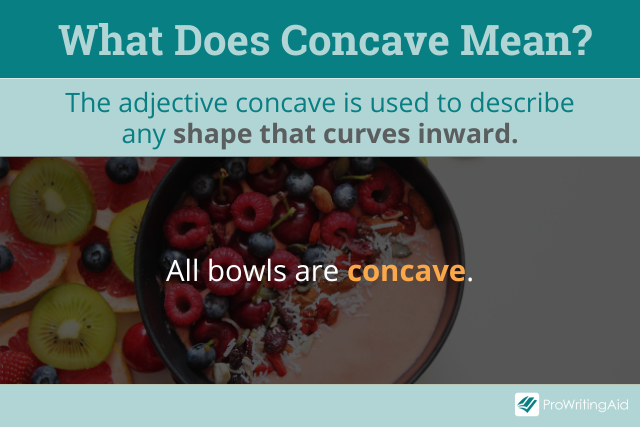 One trick is to remember that concave includes the word cave. A cave is a hollow underground chamber, which curves inwards. Thus, concave describes objects that are hollow.

Another trick is to run your writing through ProWritingAid, which can help you check your vocabulary choices.

Definition and Meaning of Convex

The adjective convex is used to describe any shape that bulges outward.

When we say something has a convex shape, we mean it has a shape similar to that of a football or rugby ball. 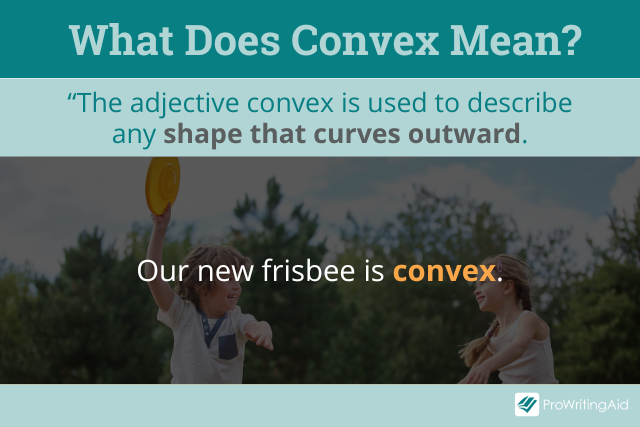 If you use the cave trick to remember the meaning of concave, all you need to do is remember that convex is the opposite.

What’s the Difference Between Convex and Concave?

These two terms are used differently in writing, mathematics, and with mirrors and lenses. It’s important to understand how they’re used in each context.

Concave vs Convex in Writing

We often use these terms in writing to describe concave and convex shapes.

The terms concave and convex are also important in mathematics. In particular, they describe different types of functions when plotted on a graph. 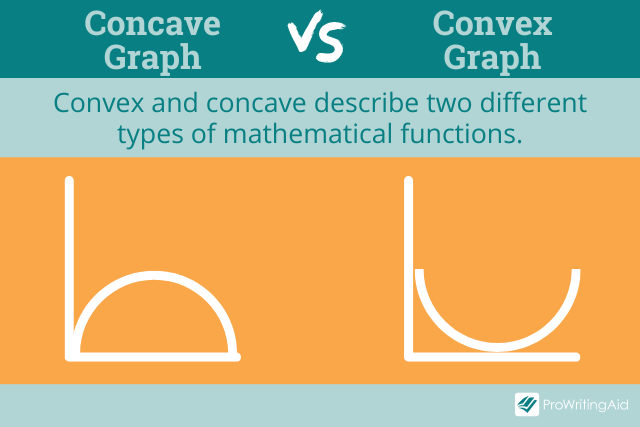 Concave vs Convex Mirrors and Lenses

This phenomenon happens because light reflects differently off concave and convex surfaces.

Concave and convex mirrors have many purposes outside of entertainment, though.

For example, many rearview mirrors in vehicles are concave, because they curve inward. Their shape allows you to see more of what’s behind you than a flat mirror would.

On the other hand, imagine looking at your reflection in the back of a shiny spoon. That’s a convex mirror, because it makes you look bigger than everything else around you.

It’s also important to know the difference between concave and convex lenses, which are often used for eye glasses and contact lenses.

A concave lens is thinner in the center than it is around the edges, so light rays bend and diverge outward.

These types of lenses are used in glasses to correct nearsightedness. They’re also used in binoculars and telescopes.

These types of lenses are used to correct farsightedness. They shorten the focal length and help you see what’s closer to your eyes.

Examples of Convex and Concave Used in Sentences

Here are some examples of the words concave vs convex from books and publications. 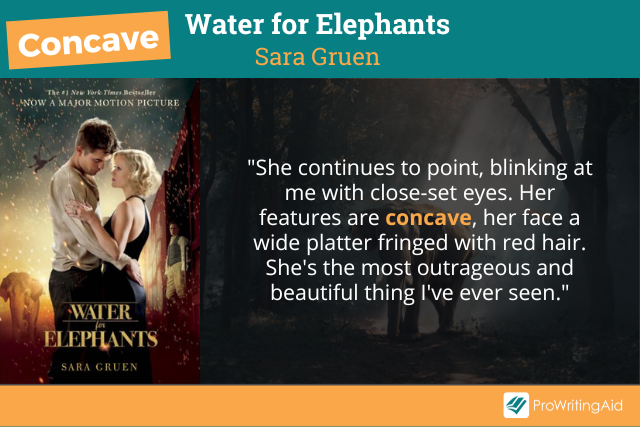 "When he takes off his shirt, I see that his shoulders are narrow and his chest almost hairless and almost concave."—The Wonder Spot, Melissa Bank

"Their faces told that they had suffered things they did not talk about. Every one of them had a good knife in his pocket, sharp, the blades whetted narrow and concave, the horn of the handle worn smooth.”—Wendell Berry, Jayber Crow

"As they pedalled us down the long suburban road to the Chinese town a line of French armoured cars went by, each with its jutting gun and silent officer motionless like a figurehead under the stars and the black, smooth, concave sky—trouble again probably with a private army, the Binh Xuyen, who ran the Grand Monde and the gambling halls of Cholon."—Graham Greene, The Quiet American

“Natalie had always been a tall, lanky girl. Flat as a board. All legs. All those ridiculous clichés and metaphors assigned to girls whose chests forgot to sprout and whose hips stayed firm and concave.”—Bianca Sloane, Every Breath You Take

“And so I went through the looking glass, stepped into the netherworld, where up is down and food is greed, where convex mirrors cover the walls, where death is honor and flesh is weak. It is ever so easy to go. Harder to find your way back.”—Marya Hornbacher, Wasted

"The beauty of quantum machine learning is that we do not need to depend on an algorithm like gradient descent or convex objective function."—Amit Ray, Quantum Computing Algorithms for Artificial Intelligence

"He approaches a cockroach in only one respect: his coloration is brown. That is all. Apart from this he has a tremendous convex belly divided into segments and a hard rounded back suggestive of wing cases."—Vladimir Nabokov, Lectures on Literature

"He passes, struck by the stare of truculent Wellington but in the convex mirror grin unstruck the bonham eyes and fatchuck cheekchops of Jollypoldy the rixdix doldy.”—James Joyce, Ulysses

There you have it: a complete guide to the difference between concave and convex. Just remember that caves are hollow, so concave describes hollow shapes, and you’ll be good to go!