A While vs. Awhile: What's the Difference? 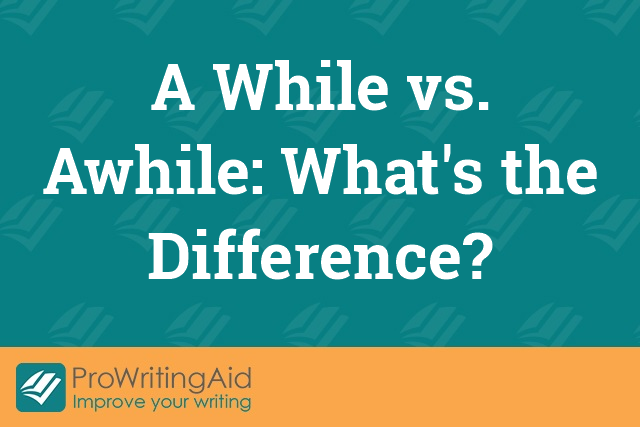 A while and awhile have a lot in common. The most obvious similarity is their shared spellings—or letters, to be more specific—and they both also relate to the concept of time.

But there’s one little difference—the space. That space has a lot of power. It turns one word into two and differentiates the part of speech represented by each of the terms, which affects the way each is used in a sentence.

For the most part (though not always, as you’ll see later), if “for a short time” or “for a time” would also work in your sentence, then use the adverb form, awhile.

What Does A While Mean?

A while is a two-word expression; it is a noun phrase.

We can tell that a while is a noun phrase because it contains an article (a), a space, and a noun (while). 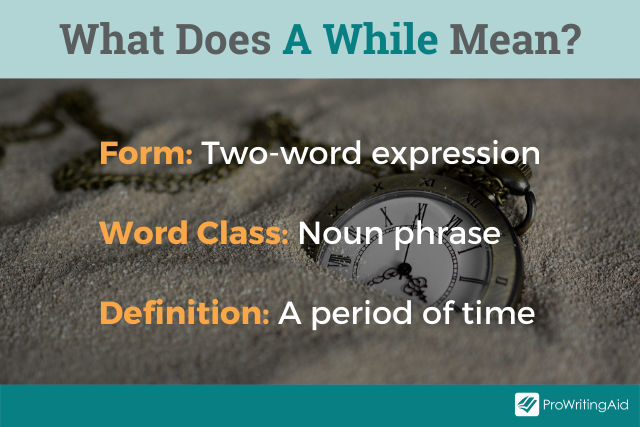 A while is a thing, defined as a period of time or an interval of time.

There are no specific boundaries on how long that period of time actually is, so a while could mean an hour or a year, depending on its context.

This probably means an hour or so.

This implies that it’s probably been months at least, but most likely years since “his” appearance had changed.

What Does Awhile Mean? 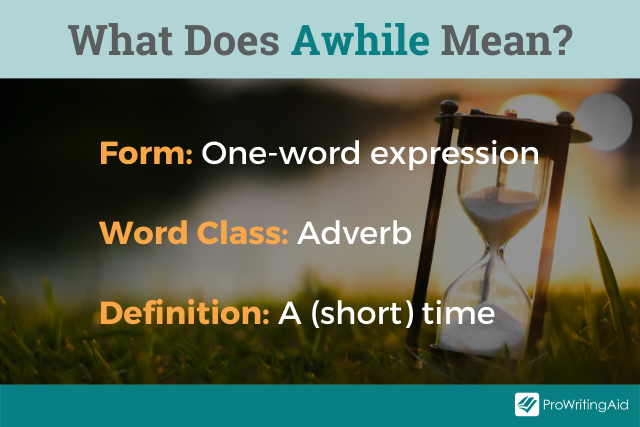 Awhile is a one-word version of the term a while. Because it is one word, and therefore doesn't have an article, the way we use it is different to how we use a while.

Awhile is an adverb. Dictionaries define it as for a while or for a short while. Awhile provides a bit more specificity than a while as to “how long” that time is. Awhile denotes a short amount of time. Still, “short” can be subjective, so as with "a while", context matters.

How to Use the Noun Phrase A While

In sentences, the two words a while serve as a unit and are often part of a prepositional phrase, following the prepositions for, after, and in. 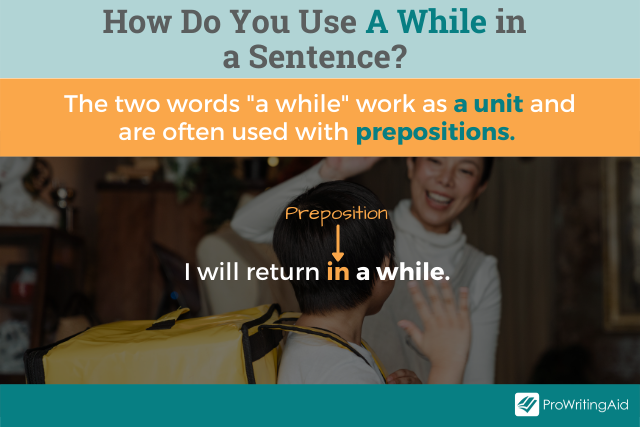 You may see an adjective inserted between the two parts of the phrase as a way of defining how long a period of time a while represents in that sentence. 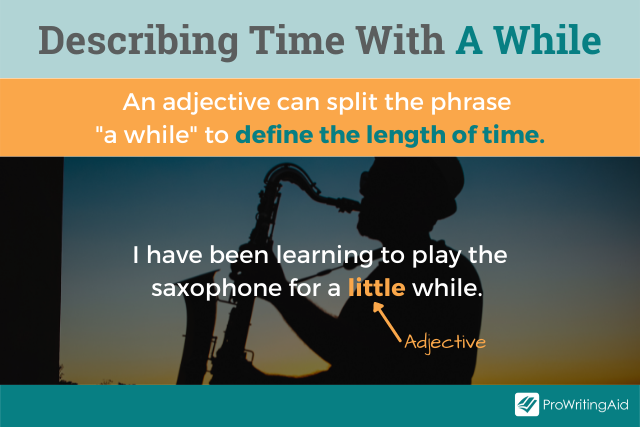 Though it’s common for a while to follow a preposition, it doesn't always. You can see how the phrase functions as a noun in these common contexts, used before ago and back.

How to Use the Adverb Awhile

Awhile is an adverb, and adverbs modify verbs, adjectives, and other adverbs. Adverbs provide answers to the questions: when, where, how, and to what extent—how much or how long? 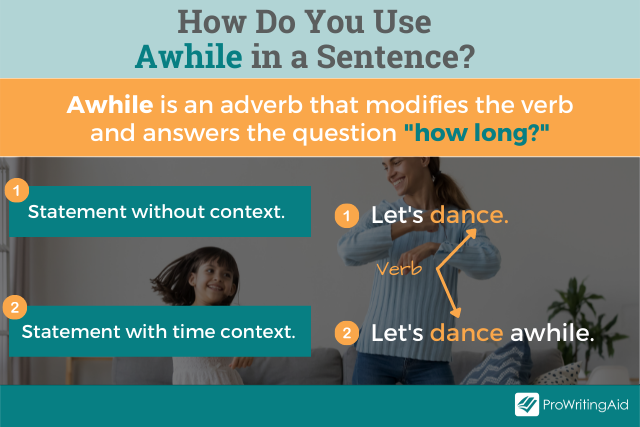 Awhile answers how long and is used to modify verbs.

The adverb “awhile” modifies the verb “talk,” providing a measurement—for a short time—that the action will occur.

Here, the adverb “awhile” modifies “cried,” explaining how long “he” was in distress.

For the most part (though not always, as you’ll see later), if “for a short time” or “for a time” would also work, then use the adverb form awhile.

Here are some examples of how to use this substitution test when you’re trying to figure out which form to use.

You want to say

You want to say

When Awhile and A While Are Tricky

So far it seems simple, right? A while is two words and is a noun phrase. Awhile is one word and is an adverb.

But: grammar. Grammatical concepts rarely stay within the realm of simplicity.

You see, a noun phrase sometimes acts like an adverb. I know.

Those noun phrases (a few more minutes and an hour more) answer the question “how long” about their respective verbs.

Let’s break it down. 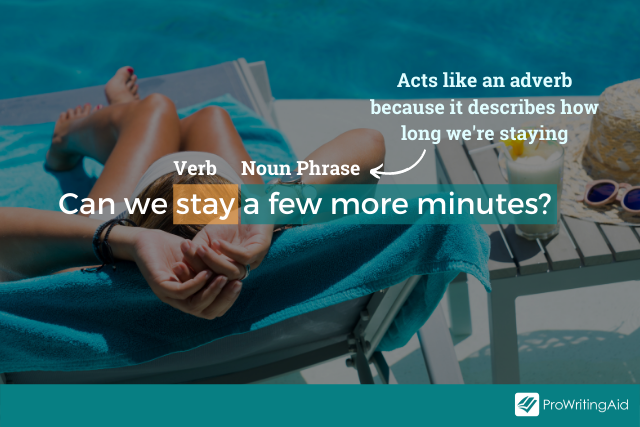 How does this complication affect a while and awhile?

Grammatically speaking, these sentences should use awhile.

These are the grammatically correct versions of those sentences.

However, did you notice that each noun phrase, working as an adverb in the examples, begins with a and a space? Sound familiar? It seems inconsistent to say that using a while in these instances (like an adverb) would be incorrect when it has the same structure as the noun phrases in the examples.

So, while awhile is grammatically correct, you probably won't be penalized if you use a while.

Examples of A While vs. Awhile Used Differently

You won’t be alone if you use the two-word form and the one-word form interchangeably in these trickier grammatical contexts. You’ll be in the company of professional publications!

In the examples below, we'll tell you which term is correct, but you'll see that even these professional writers use awhile and a while interchangeably.

In each of these examples, the term is used as an adverb (one word), but isn’t always written that way). 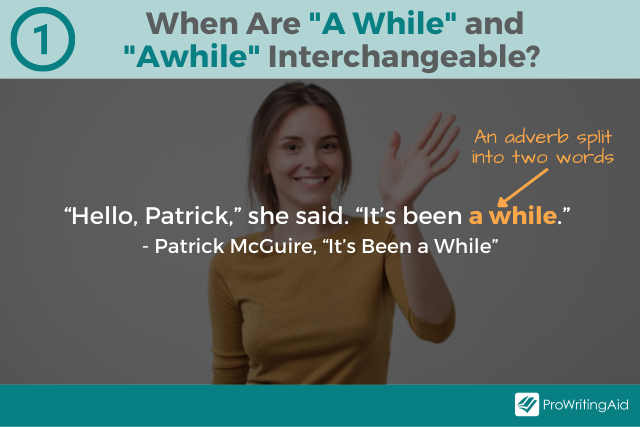 In these examples, the grammatical situation is clearer and the noun phrase “a while” (two words) is the fitting option. However, these writers went the other way, and their editors clearly didn’t mind.

All uses in these examples call for the noun phrase a while, but as you can see, there’s some variation in what is actually used.

Two Words or One? Is There a “Right” Answer?

For the most part, there is. But also for the most part—or in large part, at least— that rule is not steadfastly followed (or maybe just not understood). The interchangeable use of awhile and a while is common.

If you want to do your best to get it right (and why not?), these reminders can help: 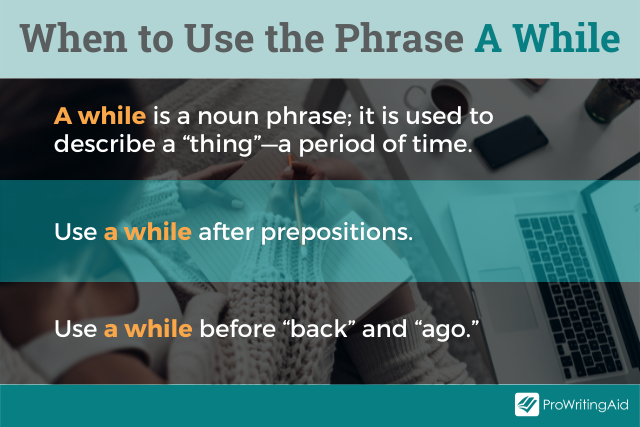 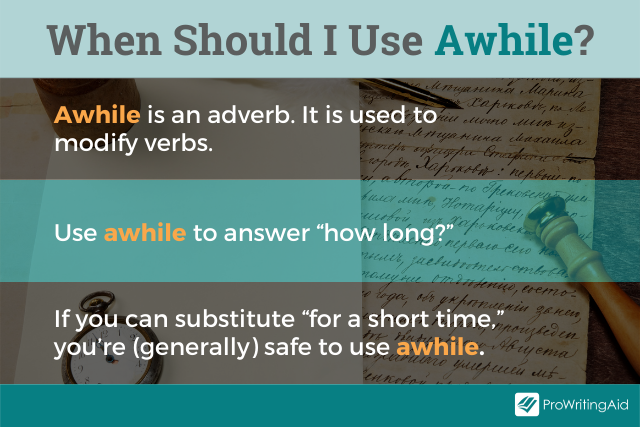 Want to make sure you use these terms correctly without remembering all those rules? ProWritingAid will catch any instances where you use a while vs. awhile incorrectly. 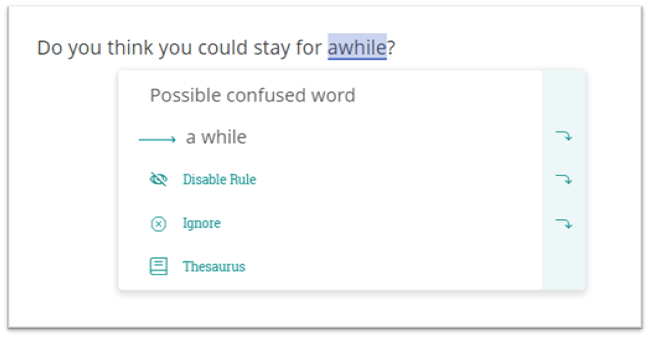 Check your grammar wherever you write with ProWritingAid's free browser extension.

This post has gone on for a while, and I need to give my brain a rest. I’m going to relax in the sunshine awhile. I hope you’re able to do the same!