How to Use ProWritingAid's Alliteration Report

When we learn writing techniques at school, alliteration is often first on the list. We learn it in nursery rhymes. The repeated 'p' sounds are part of what makes "Peter Piper picked a peck of pickled peppers" stick in your brain.

Alliteration works here because this rhyme is meant to be lighthearted and easy to memorize. But in most fiction works instances of alliteration can seem forced and disrupt the flow of your story.

There are times when alliteration is the right choice. It can be useful when you're writing short pieces for adverts, or when you're naming a character, product or business. Dunkin' Donuts, PayPal, Best Buy, Coca-Cola—lots of successful brands use alliteration to make their names memorable.

When you're writing prose, you may not even realise you've used alliteration. It's only when you read your text back that you realise it's there. It can be useful to scan your writing for alliteration to make sure you've used it intentionally without distracting your reader.

Before you find and fix alliteration in your writing, let's take a look at what it is.

Alliteration is the repetition of a beginning consonant sound. Alliteration creates an enjoyable rhythm when reading and so is often used in advertising to attract attention and comment.

Good fiction writing can include alliteration. Not every instance of alliteration needs to be as lengthy or impressive as the Peter Piper rhyme. Sometimes, you may want to repeat the first constant sound in names (consider "Black Beauty" or "Ted Tonks") to make your characters' names stand out.

How to Use the Alliteration Report 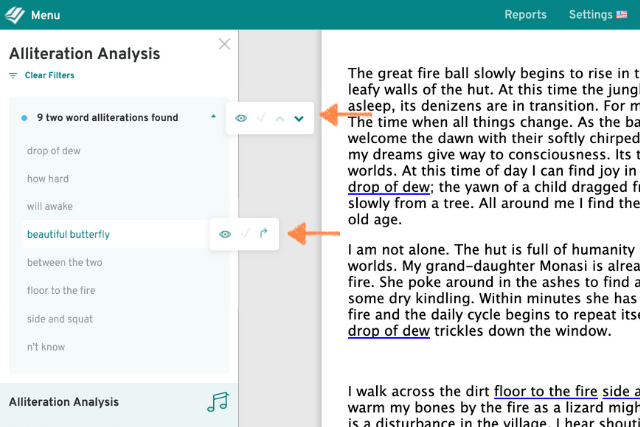 This list corresponds to highlights within your writing. Clicking on each list item will open a navigation toolbar, as in the screenshot above.

Hovering over 'alliterations found' at the top of the list will allow you to skip through the highlights in your document using the up and down arrows on the toolbar.

If you are happy with an instance of alliteration and don't want to alter it, you can hover over it in the list and click on the Eye icon to hide its highlight in your text.

How is the Alliteration Report Useful?

If alliteration doesn't come naturally when you're writing, you probably don't need to add it in when editing. ProWritingAid's Alliteration Report is most useful for review the alliteration in your writing to make sure it doesn't sound unnatural or seem unnecessary. 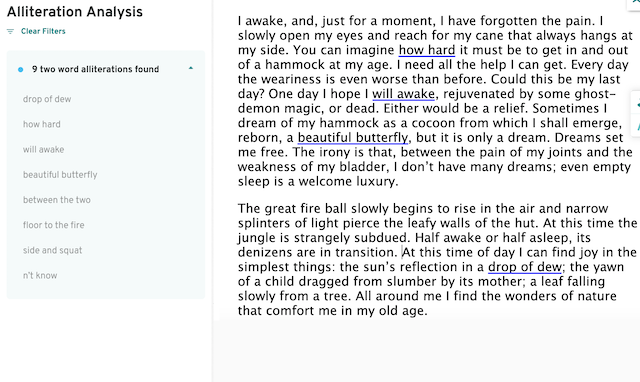 To the left, you can find a list of all of the alliterative phrases in your text. These include true alliterations like 'beautiful butterfly' as well as audial alliteration like 'will awake', which uses two similar sounds in close proximity.

We could change all of the highlighted alliterative phrases to improve the writing in this piece. Let's look closer.

How many times have you heard this description? It's become so commonplace because it's alliterative. It sticks in your mind, so you're more likely to use it when you're in the flow of writing. When you go back to edit, the Alliteration Report will highlight where you've used these tired phrases—like treasure trove, bare bones, baited breath, hard headed— where you could be using fresher imagery.

The Alliteration Report won't offer replacements, but you will see where you might want to use the Thesaurus Report to rethink your word choices.

Sometimes we use alliteration on instinct. Here, 'hard' flows better after 'how' than 'difficult' would. This alliteration isn't all that distracting, but it could still do with some revision. Here, the author is telling the reader to 'imagine how hard it must be' instead of showing us how difficult it is for their character to move.

Whilst not all instances of telling rather than showing are alliterative, noticing when alliteration is taking the place of a more direct image can make your writing stronger.

As Thomas Jefferson said: 'Never use two words when one will do.'

We can easily replace 'drop of dew' with 'dewdrop'. Use the alliteration report to see if you are using multiple words where you could use one stronger word.

In the above example, 'drop of dew' appears twice. When a catchy phrase gets stuck in your head, you're likely to use it again without realising. Check for multiples in your Alliteration Report and replace repeated phrases.

A phrase doesn't have to be alliterative for it to worm its way into your writing repeatedly. Use ProWritingAid's All Repeats and Echoes reports to check for other distracting repeats.

Run your writing through the ProWritingAid Alliteration Report. You might be surprised what you find.

How much alliteration do you use? Find out with ProWritingAid:

Honiilove
Thank you for a clear definition!

Haifa A M
Thank you I understand

nagigreat
What wonderful views greeted us at that altitude!

vkennedy.facs
Spellcheck? WIDELY, not widly. Also "so is often used" sounds better as "is often used." If website has typos and grammatical snafus, makes me wonder how effective this writing tool is for large bodies of work...

martyknox
Transitions. Well at least this is one area I pass with flying colors. Worked as an advertising sales rep for a newspaper, wrote thousands of ads. No trouble writing ad copy. I'm such a nerdy A student when I ran the report I wanted to get 90 plus on everything. Ha Ha. Challenging myself to do my best. I love this software. It is (notice I didn't use it's) similar to the strictest English instructor I've ever had. I can't argue with the numbers. Thanks for the data analysis. 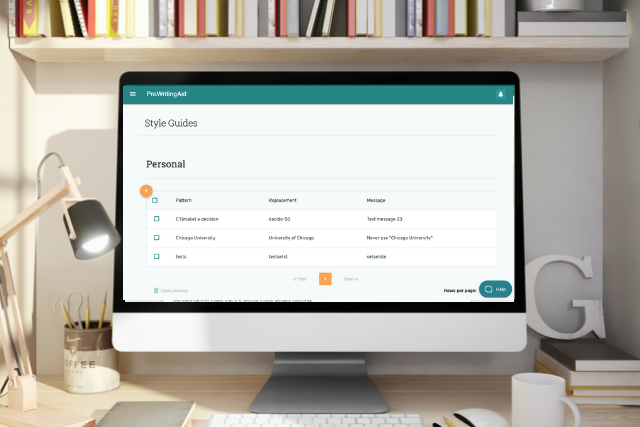 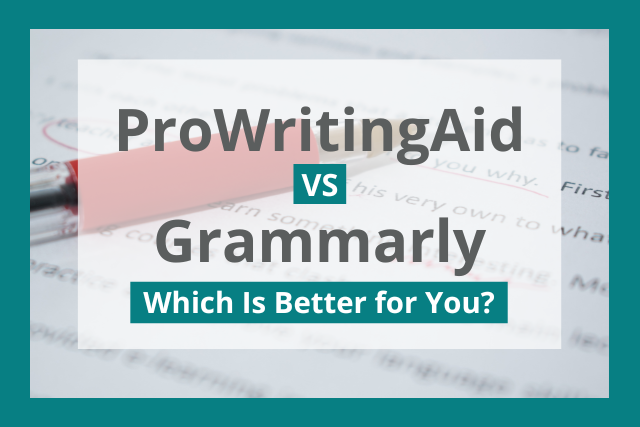 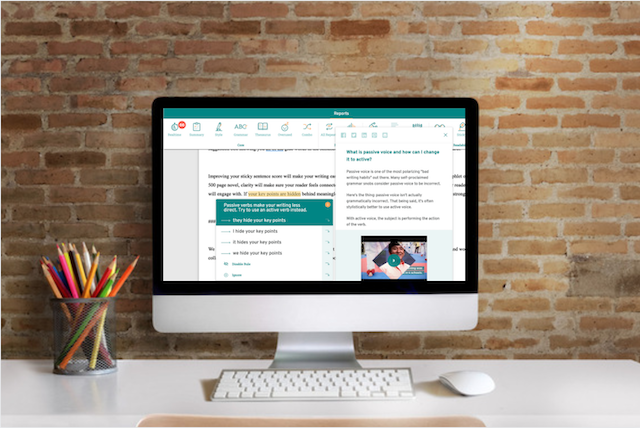 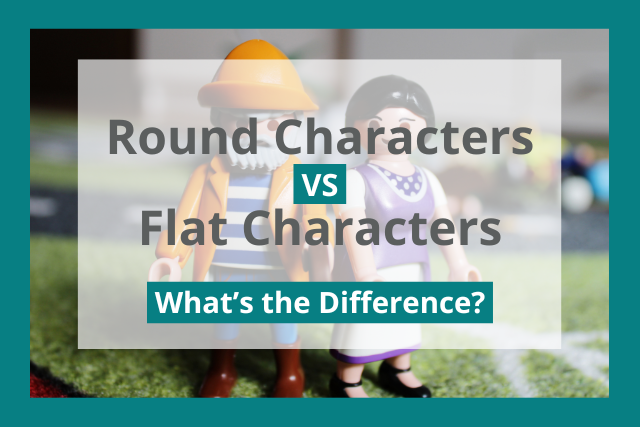 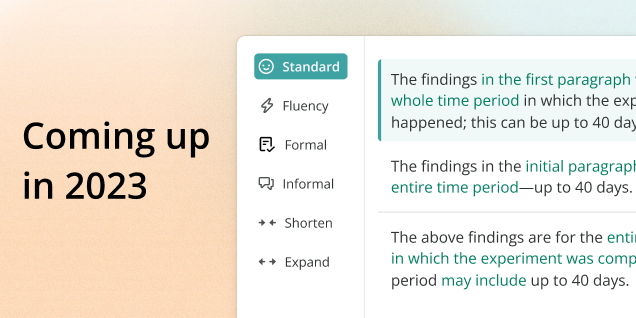 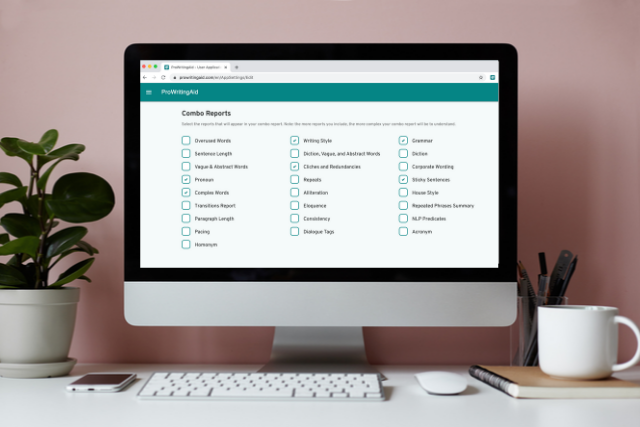 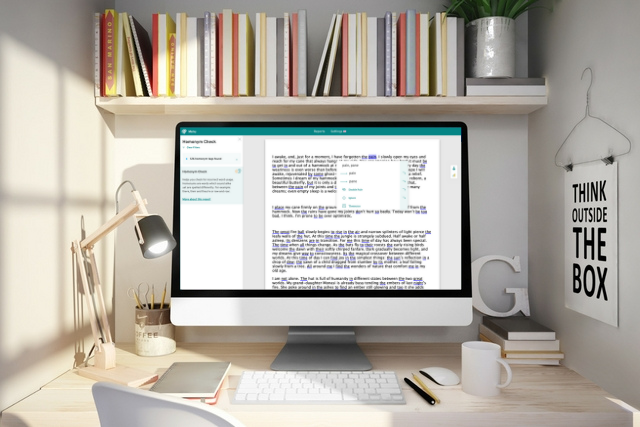