Whoever vs Whomever: What's the Difference? 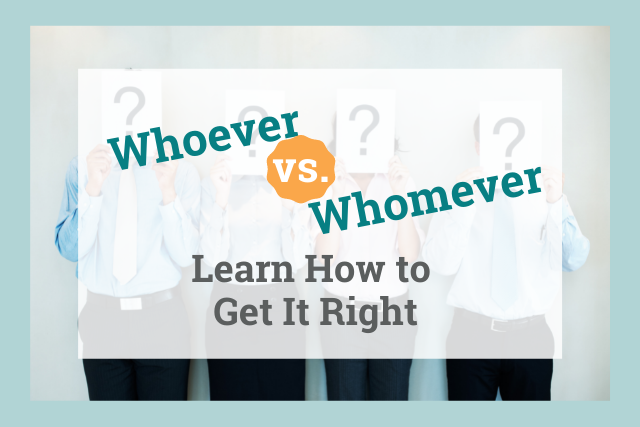 Whoever vs. whomever—which one should you use? These are commonly confused words, even by people who speak and write in English as their first language!

This guide will help you understand the difference between the two and make sure you use them correctly every time.

Getting these two words right is an easy way to polish your writing. It will make you look more professional both when speaking and writing.

What Is the Difference Between Whoever and Whomever?

Both whoever and whomever are personal pronouns (also known as possessive pronouns). These pronouns take the place of a name when you don’t know who that person is, just like the words who and whom.

But that doesn’t mean you can use them interchangeably. “Whoever” is a subject pronoun, while “whomever” is an object pronoun. 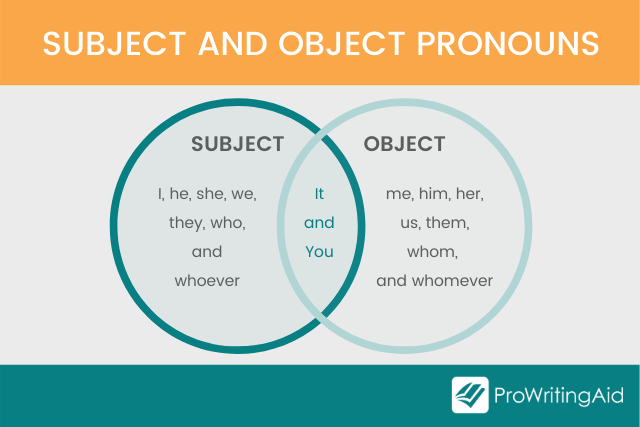 Note: The pronouns “it” and “you” are the same whether they are acting as subject or object pronouns.

How Do I Know Whether to Use Whomever or Whoever?

If you’re not sure whether the pronoun is replacing the subject or object of the sentence, there’s a trick to help you get it right.

Test your sentence by rephrasing it with “him/ her” or “she/ he” as if you know the person responsible. 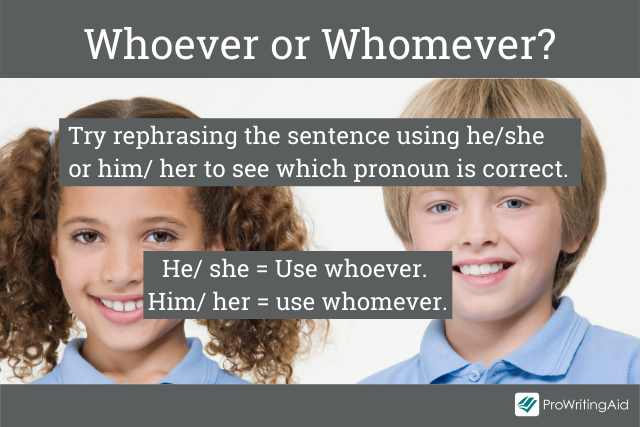 In the above example, you can see that “she” makes sense and sounds correct, but “her” doesn’t. As she (or he) fits, the pronoun “whoever” is correct:

In this example, the pronoun “him” works, but “he” doesn’t make grammatical sense. As him (or her) fits, the pronoun “whomever” should be used. 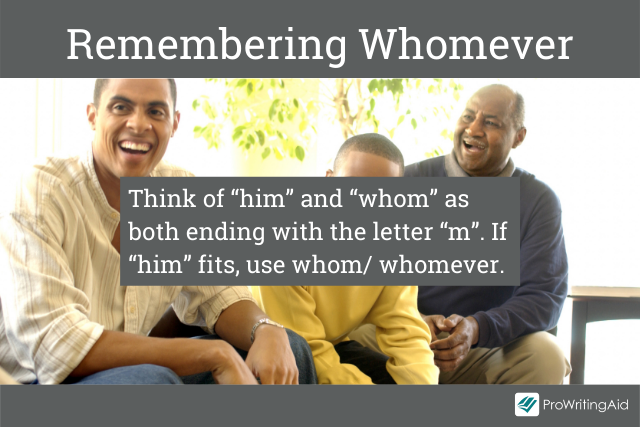 As an easy way to remember, think of him and whom as both ending with the letter m. If him fits, use whom/whomever.

Can You Use Whoever and Whomever Interchangeably?

Many people use whomever and whoever as synonyms, but this isn’t correct. Using the wrong one can give a poor impression of your written (and spoken) English.

Some people mistakenly think whomever sounds more sophisticated, so they use it for formal writing and to sound better educated. However, this mistake can have the opposite impact and make you sound less intelligent.

Others avoid using it altogether and just rely on whoever as both a subject and object pronoun. Although this mistake is less obvious, it’s still not correctly written English.

You can remind yourself to check whether you’re using the right word with ProWritingAid’s Style Guides.

Create a rule that prompts you to check your wording whenever you use whomever or whoever. You’ll see a message like this: 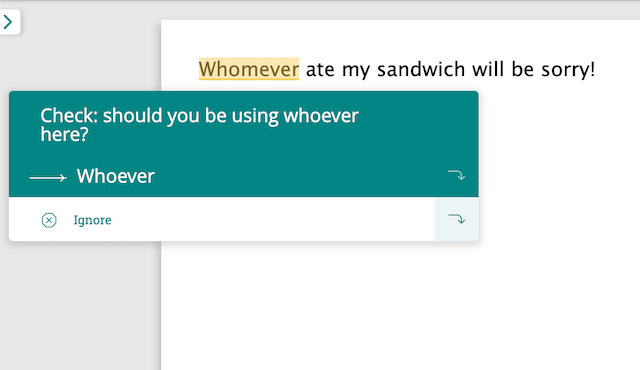 ProWritingAid works with you to help you make sure you use the right terms every time.

How Do You Use the Word Whomever in a Sentence?

So now you know when to use whomever, let’s try using it in some example sentences.

With each sentence, you can tell that whomever has been correctly used because the pronoun is not the subject of the sentence. They are not performing the verb, it is affecting them.

In each example, whomever could be rephrased using him/her (remember to look for the m to remind you: him = whom = whomever).

Can a Sentence Start with Whomever?

You might have spotted from the examples above that whomever isn’t usually found at the start of a sentence. That’s because it’s the object rather than the subject of the sentence.

That gives you another easy way to decide which one you need to use. If you’re starting a sentence, there’s a high probability that whoever is probably the right choice.

However, there are a few exceptions to every rule. Occasionally whomever can work at the start of a sentence.

When you start a sentence with whomever, you’re creating a subordinate clause. Remember, you’ll need a comma to separate it from the independent part of the sentence.

How Do You Use the Word Whoever in a Sentence?

Now let’s look at how to use the word whoever in some example sentences:

You might have noticed from these examples that unlike whomever, whoever can often be found at the start of sentences. To check if you’ve got the correct word, you can rephrase the sentence using the word he/she.

Whoever is always the subject of the sentence. That can be confusing in more complicated sentences like the first example above.

However, remember to look for the verb to see who is completing the action. In the first example, I am feeling furious, but the verb “ate” shows the subject of the sentence is the person who’s been eating my sandwich, rather than me. 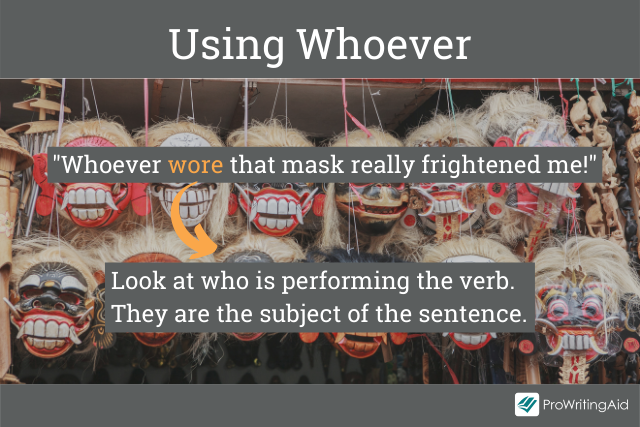 What Is the Meaning of Whomsoever?

If you want to sound sophisticated (or perhaps old-fashioned), you could use whomsoever as a formal, but now rather archaic, version of whomever.

Whomsoever and whomever are synonyms so they have the same meaning, but whomsoever has fallen out of common usage.

You’ll most likely spot it in very formal legal or academic documents, or in older writing, such as this example from the Bible:

“Now he that betrayed him gave them a sign, saying, Whomsoever I shall kiss, that same is he: hold him fast.”

More modern translations of this passage use whomever or omit it altogether:

“Now His betrayer had given them a sign, saying, ‘Whomever I kiss, He is the One; seize Him.’”

In standard writing, it’s best to always stick to whomever as this is now standard usage. 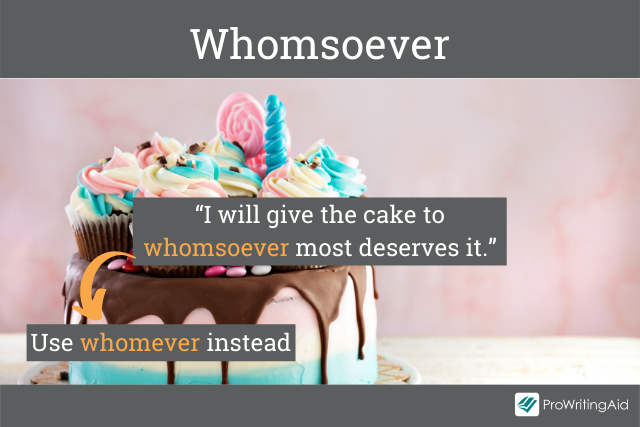 What Is the Difference Between Whoever and Whosoever?

Whosoever is a very formal, archaic way of saying whoever. It’s now not in general usage so, like whomsoever, you’ll find it in very formal legal documents or older texts, like this example from the Bible:

Modern translations often simplify this to whoever or omit it completely:

“For whoever wants to save their life will lose it, but whoever loses their life for me and for the gospel will save it.

As with whomsoever, there is no need to use whosoever in your everyday writing. While it is technically correct, it can make your writing look overly formal or old-fashioned.

Do I Need to Use Who/Whom or Whoever/Whomever?

All four of these words are pronouns that are used when we don’t know the subject or object of a sentence. Who and whom are focused on a specific person’s identity. Whoever and whomever are more concerned with the verb rather than the identity of the person.

Both these sentences give the impression that the identity of the culprit is unknown and is of less importance than the act of catching them. The emphasis is on the verb caught/catch.

Whereas in these next sentences, the emphasis is on the identity of the person rather than the action:

In the first sentence, the emphasis is on the thief. The second one focuses on the identity of the victim. Both are less interested in the crime and more in the specific person responsible or affected by it. 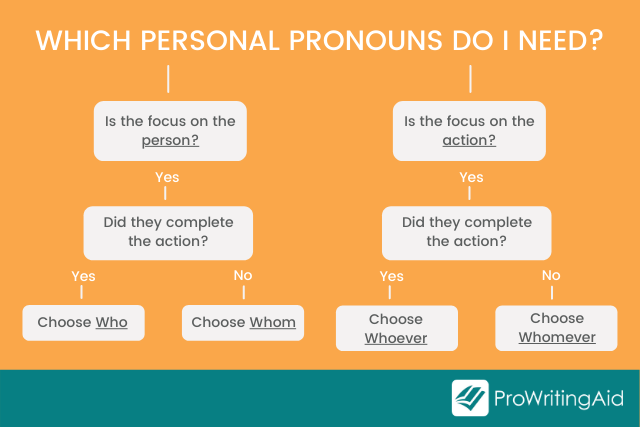 Is Whomever a Dying Word?

With all the confusion over whether to use whomever or whoever, you can understand why many people are choosing not to use whomever at all. That puts it at risk of becoming an obsolete word in the future.

The English language is constantly evolving. We only have to look back to Shakespearean English to see how much it can change over time. Perhaps whomever will become an old-fashioned expression, much like whomsoever has become now?

For now, whomever is still commonly accepted usage and the important thing is that, when you use it, you get it correct.

Quiz: Which Is Correct: Whoever or Whomever?

The correct answer is A. You could rephrase the sentence using the word him, by saying, “I gave a bonus to him,” showing you need whomever.

The correct answer is A. The subject of the sentence is the person who lost the tickets.

The correct answer is B. You could test this sentence using the word him by saying, “You brought him to the party.”

The correct answer is A. Whomever is very rarely used at the start of a sentence.

The correct answer is B. The person who left the parcel is not the subject of the sentence, although they did leave the parcel.

kyle.kucera1
Thanks for your comment! Those verb phrases after whomever are tricky. However, they are not functioning as verbs but as adjectives—they are describing "whomever." Those examples still require the object pronoun "whomever," even though they might look like a subject pronoun at first glance. The phrases after "whomever" are participle verbals, not true verbs. We hope this helps!