ProWritingAid
ProWritingAid
Blog Grammar Rules Imperative Sentences: What They Are, How to Use Them, and Examples

Imperative Sentences: What They Are, How to Use Them, and Examples

If you’re really paying attention, you might have noticed that I included an example of each of the four sentence types in that post opener, including an imperative sentence. Read on to learn more and to see over 40 examples of imperative sentences! 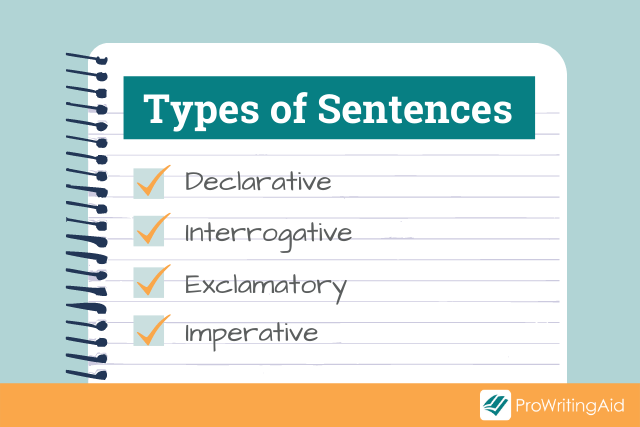 What Are the Four Types of Sentences?

These are the categories for the four types of sentences: declarative, interrogative, exclamatory, imperative.

From these descriptions, see if you can determine which type is represented in the four sentences I used to open the post.

Take a moment to go back and evaluate the four sentences that opened the post. Then check your answers! 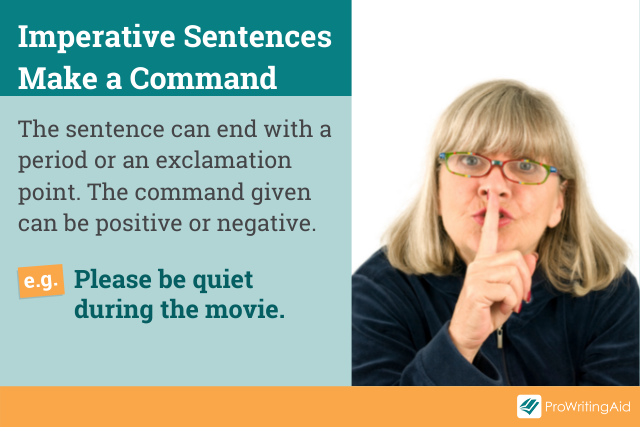 Is It an Imperative or an Exclamatory Sentence? 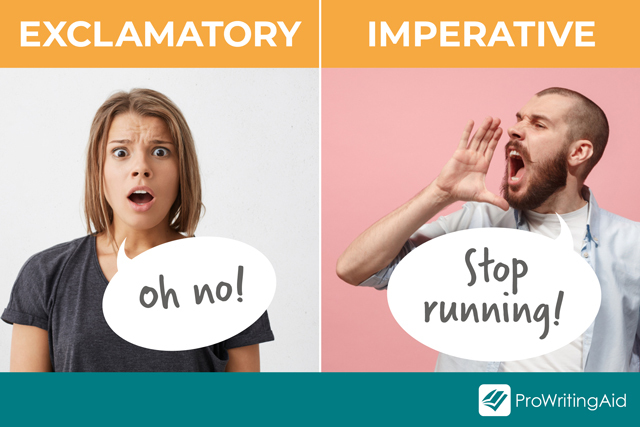 You’ve likely noticed that some of the imperative sentence examples I’ve given so far end with an exclamation point, but that doesn’t make them exclamatory sentences.

The purpose of imperative sentences is to give commands. If the command comes with an exclamation mark, the mark is there to add urgency to that command. To soften the command, use a period. To add politeness, include a “please.”

While verb tenses tell us when a verb occurred or will occur (past, present, future, etc.), verb moods tell us how that verb is expressed.

One of the verb moods is the imperative mood, which is the mood that forms a command. Imperative verbs often start imperative sentences.

Yes, “Stop!” is a single verb and a complete sentence all on its own when it is used as a command. (If you’re confused, this will make more sense when you read on about the subject of imperative sentences, so keep going!)

The last example starts with “please,” but don’t let that word distract you. The purpose of the sentence is still to issue a command, and the imperative verb “change” leads that command.

Imperative or Exclamatory? Test Yourself! 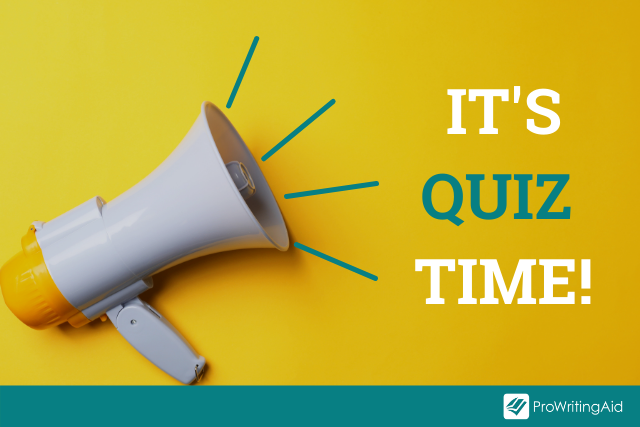 What Are the Functions of Imperative Sentences? 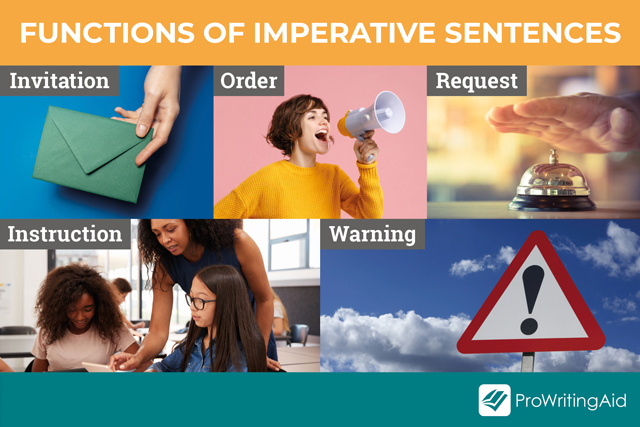 The function of imperative sentences is to give commands, but that doesn’t mean they only do the work of drill sergeants or bossy older siblings. Imperative sentences, and the commands they give, have distinct tones and intents and generally fit into one of the following categories:

Who Is the Subject of an Imperative Sentence? 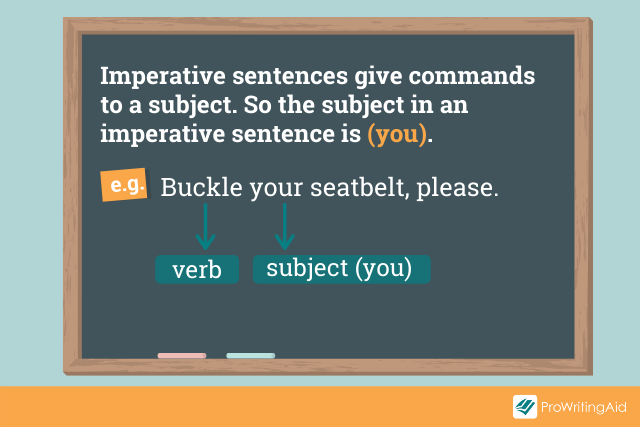 Every sentence has a subject and verb, and expresses a complete thought. The verb tells us what the subject is doing or what state of being the subject holds.

Imperative sentences, though, aren’t about a subject; they give commands to a subject. So who is that subject on the receiving end of the command?

The answer: “you.” In proper grammatical terminology, that subject is known as “you understood” and is written as (you).

Let’s take the declarative sentence about Johnny and turn it into an imperative. Imagine you’ve loaded Johnny into his seat and say,

And that same subject (you) would also be the subject for the sentence Stop!

But what if you had said, “Johnny, buckle your seat belt, please.” Is the subject now Johnny?

Nope. Grammatically, the subject is (you) as it is for all imperative sentences, even if a specific audience is included in the statement.

In each of these examples, as with almost all imperative sentences, the command is given from the second-person point of view—the speaker is talking to (you)—and the subject is simply (you).

How Is the Word Imperative Used in a Sentence?

So far, you’ve seen the word “imperative” used to define or label a type of sentence, and you know sentences categorized as imperative express urgent, or at least important, commands. The words “urgent” and “important” help clarify what “imperative” means when it is used in a sentence rather than to identify a type of sentence. 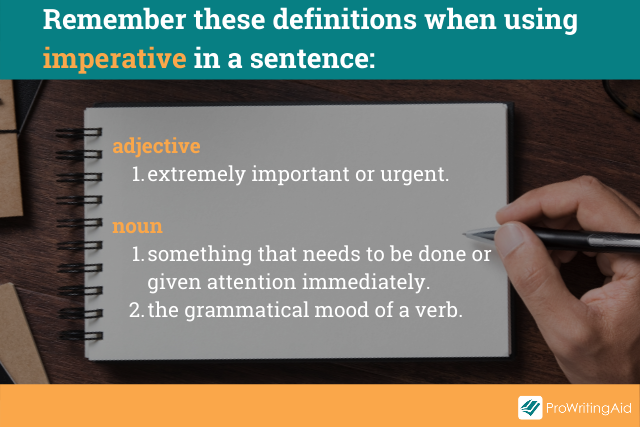 Examples of the Word Imperative Used as an Adjective

Examples of the Word Imperative Used as a Noun

And here’s a double-dipper just for fun:

If you still find that you’re not clear on all the definitions, ProWritingAid offers an easy fix. The Word Explorer is your one-stop for all things definitions, synonyms, examples, rhymes, collocations, quotes, and more. Request a free trial and try it today! 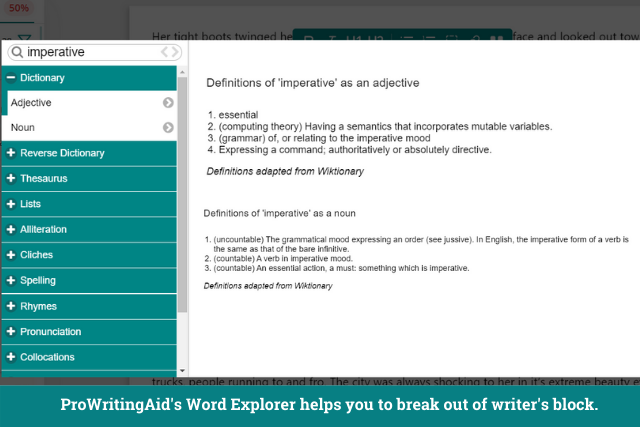 Imperatives comprise a significant amount of our everyday communication. We regularly use words to give orders, make requests, extend invitations, provide instruction, and offer advice.

You’ve probably said things today that reflect the commands given in some of these imperative sentences:

Pay attention and you’ll quickly realize we are immersed in imperatives (that was one right there!). Listen to yourself and others (there’s another). Be aware as you read books, watch movies, and sing along to music (and another), and you’ll find imperatives everywhere.

millie.dinsdale
We are glad you have found it helpful!

shampa4682
‘We should protect trees and conserve nature.’ Is this ☝️an imperative sentence ? Plz guide.

kyle.kucera1
Yes, this is an imperative sentence. :)