What is the difference between 'except' and 'accept'? 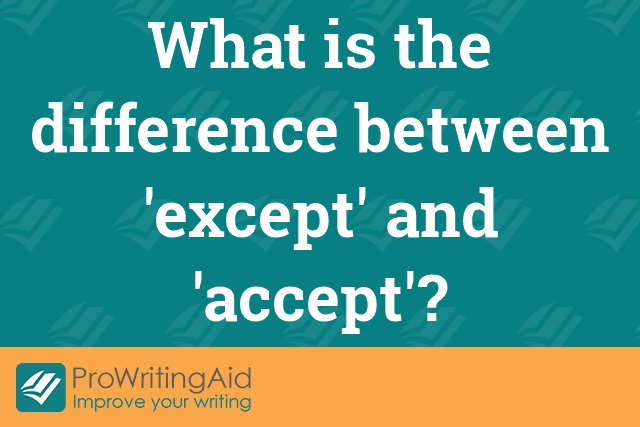 Accept and except are part of the homophone family. Homophones are two words that sound the same but have different spellings and meanings.

For this reason, accept and except are sometimes confused with one another, even by writers who speak English as their first language.

Homophones can be great when you use them intentionally for some clever word play! But they can also be sneaky, showing up so stealthily that you don’t realize you’ve used the wrong word and publish an error.

While some homophones cause more trouble than others (affect and effect, for example), others are easier to manage. Accept and except fall into the latter category. 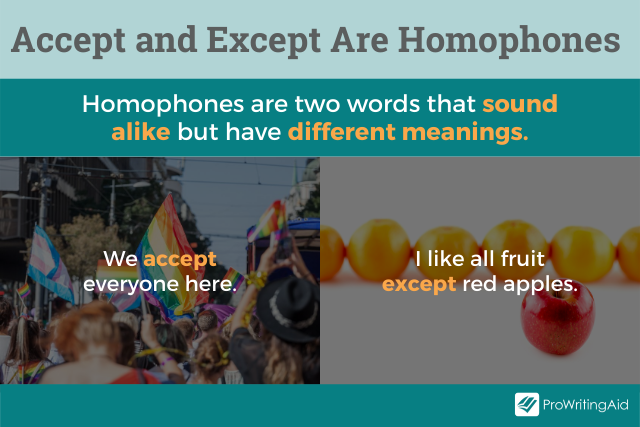 What Does Accept Mean?

Accept is a verb and only ever a verb. Of the two words in this pair of homophones, accept is the one less likely to give you any trouble, thanks to its singular part of speech.

Accept has several meanings, but you’ll see they are related to the general concepts of allowing or receiving.

Merriam Webster includes the following as definitions for the verb accept:

To receive something willingly

To give admittance or approval to

To endure without protest

To recognize as true

While there are nuances, or slight distinctions among the definitions of the verb accept, they share a common theme or concept of reception.

Essentially, accept means “giving the okay” to something or someone. 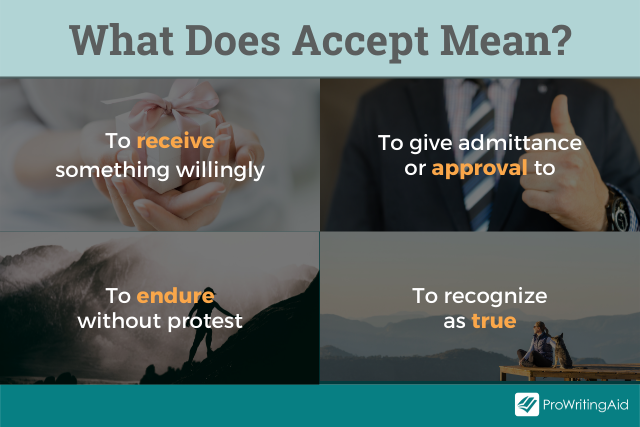 What Does Except Mean?

Except is a little more unruly than accept, but still quite manageable. It can take the role of preposition, conjunction, or (less commonly) verb.

But—its first two letters, ex, provide a bit of a clue to its meaning, which contrasts with the definition of accept.

When you think of except, think of the “ex.” An ex is someone or something that is usually left out of your life—they are excluded.

They are not “given the okay.” The definitions and uses for except relate to that concept of exclusion. 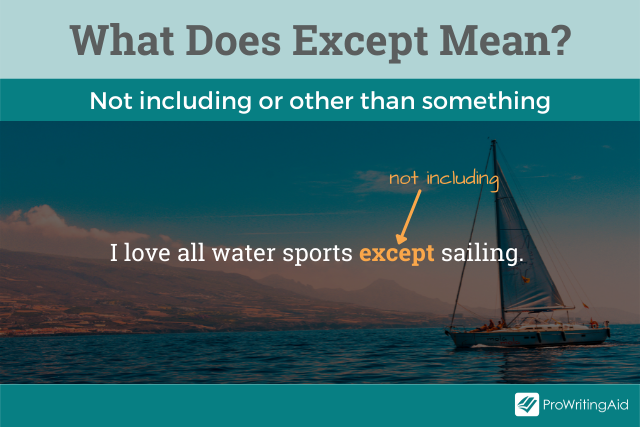 Except as a Preposition

A preposition is a word that works with a noun phrase usually preceding it, with the purpose of showing direction, location, time, or spatial relationships, or to introduce an object.

Examples of prepositional phrases are:

As a preposition, except means “not including,” “but not,” or “other than.” 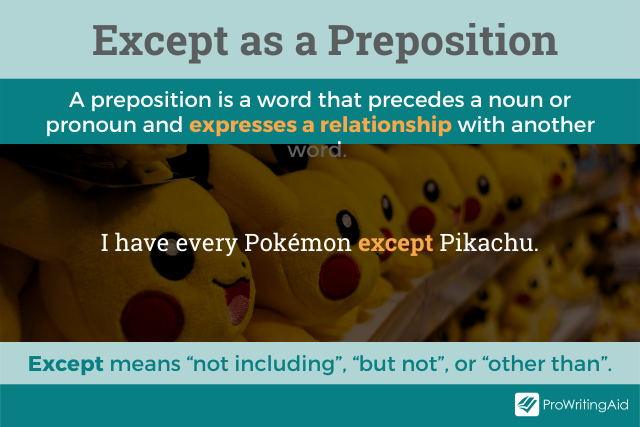 Except as a Conjunction

When used as a conjunction, except can mean:

A conjunction is a word that joins or shows a relationship between words, phrases, or clauses. When used as a conjunction, except is often followed by “that” or “for.”

So far so good, right?

Accept is a verb and except is a preposition or a conjunction. Those are easy distinctions.

Plus, accept generally means “to receive or take in,” while except means “to exclude or leave out.”

Their meanings and functions don’t overlap and except’s spelling even provides an obvious clue to its use!

So, as far as homophone pairs go, accept and except are fairly distinct in form and meaning ...

Except for when except can also be used as a verb. I know, we were so close! 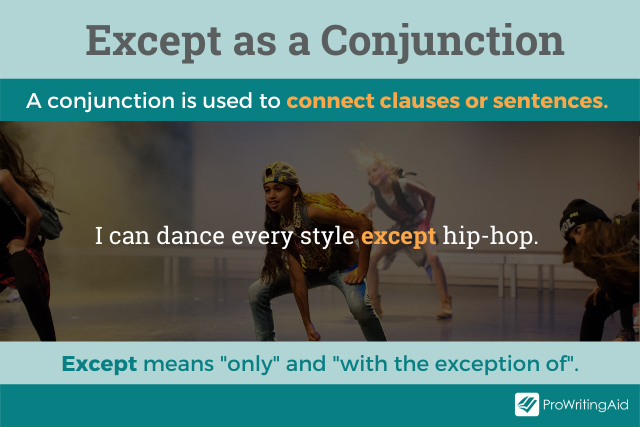 Except as a Verb

Of all of its possible parts of speech, the verb form is the least common use of except. But it isn’t completely uncommon.

As a verb, except means to exclude—to leave out. Sound familiar? 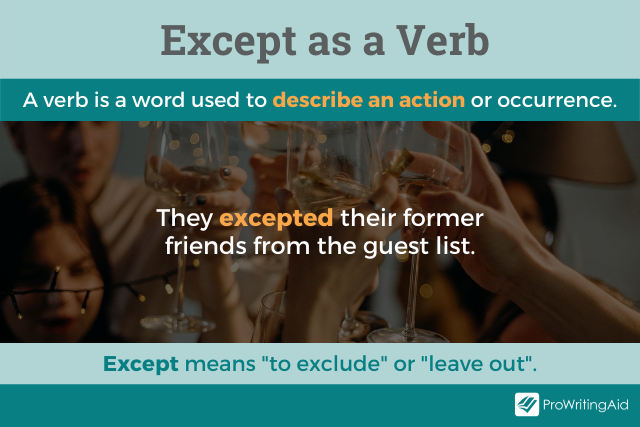 Remember the Difference Between Accept and Except

Let’s review what we know about accept and except so that you can use them confidently and without error in your writing.

If you still find yourself making errors when using these homophones, I have two suggestions. 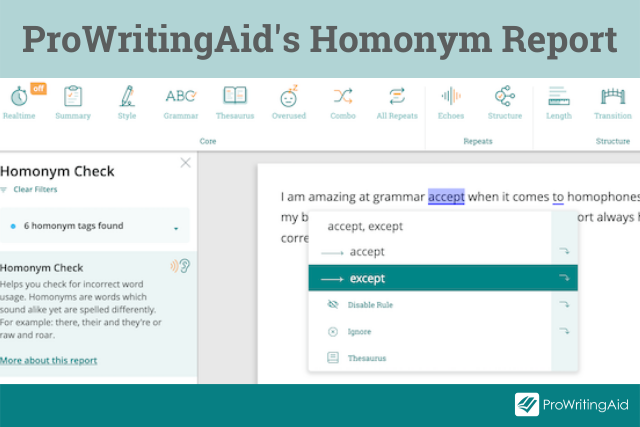 Accept or Except? A Final Review

Should you use accept or except in these sentence examples?

Examples of except in a sentence

Except then he’d been ill at ease, nervous.
- Secret Weapon Spouse by B. J. Daniels

I talked to God all the time, except when I lay terrified in my bed at night.
- Some Girls: My Life in a Harem by Jillian Lauren

Now there is no prison except humanity itself, free from any attachment.
- Grand Junction by Maurice G. Dantec

Theyd used the down comforter all summer except for eleven days at the beginning of July.
- Nothing gold can stay by Dana Stabenow

Glow plain and foreign On my homesick eye, Except that you, than he Shone closer by.
- The collected poems of Emily Dickinson by Emily Dickinson; Rachel Wetzsteon

Examples of accept in a sentence

Just because you're willing to offer it doesn't mean that I'm willing to accept it.
- Breakfast in Bed by Robin Kaye

Not thought to accept bribes.'General
- From Russia with love: a James Bond novel by Ian Fleming

I was wrong not to accept the help, but that's over now."
- The heart of Devin MacKade by Nora Roberts

How do I stop shaking and accept Roy’s delirium?
- A Graveyard for Lunatics: Another Tale of Two Cities by Ray Bradbury

I dressed to accept my Oscar in a sequined Armani gown with a plunging back.
- Some Girls: My Life in a Harem by Jillian Lauren