En Dash: When to Use It (with Examples) 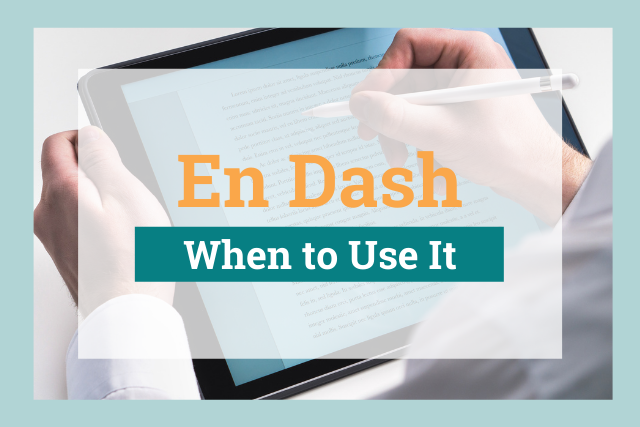 The en dash is one of the three types of dashes. It’s not interchangeable with a hyphen or an em dash.

What exactly is an en dash, and when do you use it in your writing?

What Is an En Dash?

An en dash (–) is slightly wider than a hyphen, but smaller than an em dash. It gets its name from being the same width as a capital N.

Most often, an en dash is used to represent a range of numbers, dates, or a time frame. You should not leave a space between the words or numbers when using an en dash.

Many people use all dashes interchangeably, or they’ll use two hyphens in lieu of an en dash or em dash. But each dash has specific functions.

An em dash—the longer of the two dashes—is used like a comma to separate one thought from another in the same sentence.

Hyphens are used for compound words, like self-esteem, or when writing out numbers, such as forty-five.

On a typical computer keyboard, you can type an en dash using the ALT key plus the code 0150. Remember, never put spaces around the dash.

When to Use an En Dash

The en dash has five major functions. Let's take a look at each in detail, along with examples.

Using an En Dash with Number and Date Ranges

The en dash can be used to show number ranges.

Example: The professor assigned pages 118–130 as our required reading over the winter holiday.

It can also be used to represent date spans. Just remember not to use “from” or “between” with the en dash date span.

Days of the week and months of the year follow the same rule as above.

Incorrect: The road will be under construction between August–October.

Correct: The road will be under construction August–October.

Correct: The road will be under construction between August and October.

The “from/between” rule can be tricky to remember. Fortunately, you don’t have to.

ProWritingAid’s real time grammar checker will prompt you if you use an en dash incorrectly.

Using an En Dash with Time Spans and Scores

Use an en dash with time spans, following the same rules as date spans.

Incorrect: The cable repair man is expected between 11am–3pm.

Correct: The cable repair man is expected between 11am and 3pm.

Example: The Cubs beat the Bears with a final score of 21–3.

Using an En Dash with Conflicts or Partnerships

When names or proper nouns demonstrate either a partnership or a conflict, connect them with an en dash instead of a hyphen.

For example, in the case of two individuals who share credit for something, you would use an en dash, e.g. Einstein–Rosen Bridge. An example of a historical conflict title is the Comanche–Apache battles.

Note that you should not use the en dash when someone has two last names. The correct punctuation is a hyphen, e.g. Olivia Newton-John.

Using an En Dash with Connections or Directions

Write connections between locations or ordinal directions with an en dash.

Incorrect: The Dallas--Orlando flight is delayed.

Correct: The Dallas–Orlando flight is delayed.

Incorrect: Route 66 is the most famous east—west route in the US.

Correct: Route 66 is the most famous east–west route in the US. 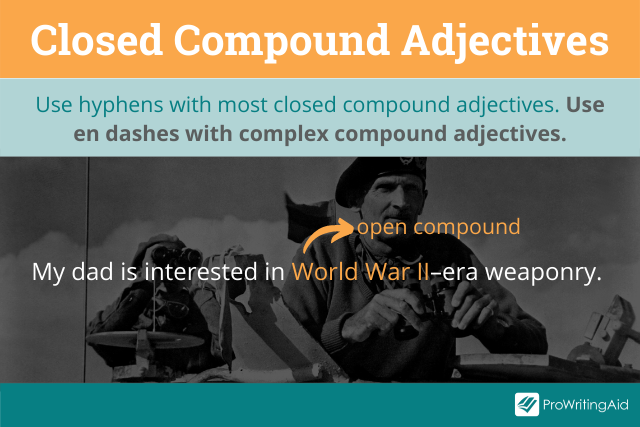 Here's how to use the en dash with a complex compound adjective.

Example: My dad is interested in World War II–era weaponry.

World War II is an open compound adjective describing “era.” By using an en dash instead of a hyphen, you show that “era” connects to all of “World War II” instead of just “II.”

How Do You Use the En Dash in a Sentence?

The en dash replaces the words “to” or “through” in number and date ranges and time spans. It also represents “to” for connections.

Let’s take a look at some more examples of how to use the en dash in sentences.

The en dash is used only in these very specific situations. Knowing these rules can eliminate dash confusion in your writing.

This is an update to an article by Julia Granowicz-Johnson.