ProWritingAid
ProWritingAid
Blog Grammar Rules E with an Accent: Learn How to Type É and Use It Correctly in Your Writing

E with an Accent: Learn How to Type É and Use It Correctly in Your Writing

What do these words have in common? They’re my guilty pleasures. Also, they all have an e with an accent.

But what does that little accent really mean? What is it called? How is it pronounced? And how do we type it on a keyboard?

In this article, we’ll answer those questions and so many more. Read on!

What Does É Mean?

The little mark above the letter in é is what’s known as an acute accent. This mark suggests a modified pronunciation of the letter.

Though we’re focusing on é for this article, acute accents can appear above any other vowel, so long as they’re necessary. 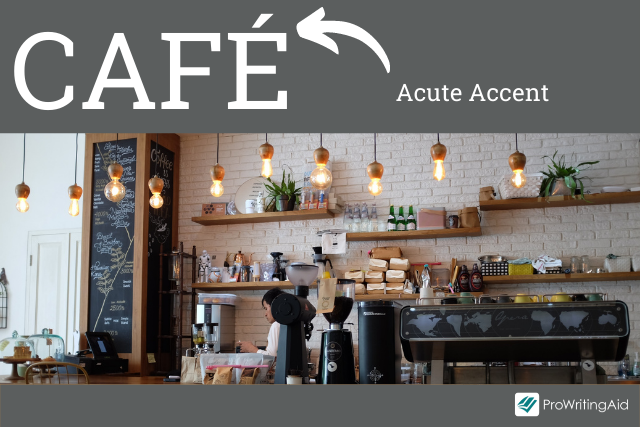 Here are a few other words that commonly use é: 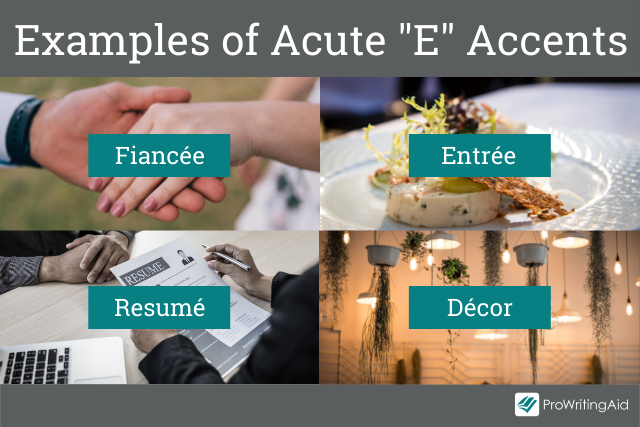 Though the acute accent appears in many languages for many reasons, it’s most often seen in English for words borrowed from French.

You might see these words without the accents, most often for the sake of brevity (or perhaps because the writer didn’t read this article, and therefore didn’t know how to type the symbol).

Though that’s technically still correct for many words, the most precise method is to use the accent. We’ll show you how to add the accent later in this article.

You might also see these words with several additional accent marks, such as in “pièce de résistance” or “pâté.”

We’ll explore the meanings of some, but for the most part, one single acute accent mark will do—the other accent marks are often unnecessary.

And even if you see two acute accents in a single word, as in “résumé,” it’s often acceptable to simplify to one: “resumé.”

When in doubt, a quick online or dictionary search can yield the right answer. 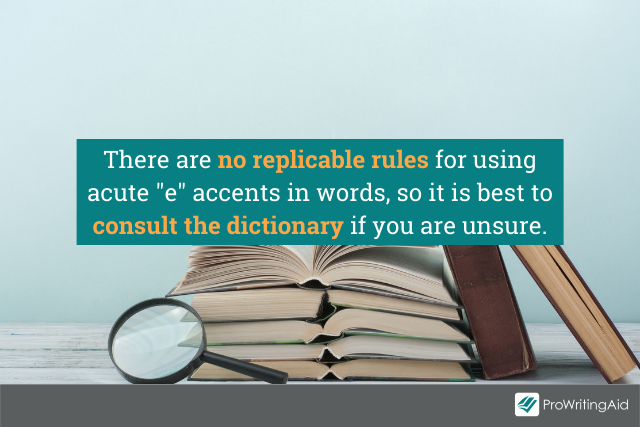 The words we’ve used so far should give a good hint: é usually makes an “ay” sound. Take these examples spelled out phonetically:

Think of the acute accent as a dash of spice on the letter; it just adds a little extra flavor to these familiar letters. 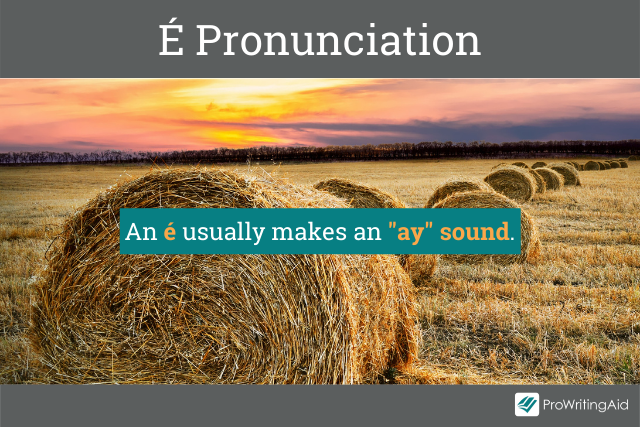 Occasionally, one may see the acute accent added to words that don’t normally need the extra spice.

This is most often for poetic purposes, when the writer wants to add emphasis to letters that don’t usually get it.

One can technically use the accent over any vowel, but just note that overusing them will get old for the reader quickly. Consider this example:

I’m no poet, but you get the idea. This sort of writing is tiresome (not to mention it looks pretentious). Use the accents when necessary, but use them sparingly, if at all, for poetic purposes.

Fortunately for us writers, ProWritingAid will protect us from such silliness.

If we pop that sentence into the app and run the Realtime or Grammar Checker report, we’ll soon see the error of our ways. 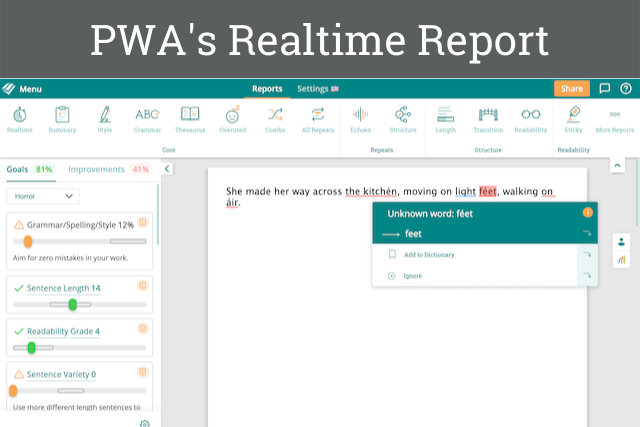 Download our browser extension to check your spelling and grammar wherever you write.

How Do I Type É on My Keyboard?

The answer to this question varies depending on your operating system. Here are several of the most popular ones.

How Do I Type É on MacOS?

This one is really easy. Hold down the e key until a menu pops up above the letter. Each accented version of the letter e has a corresponding number.

For é, hold down e and then hit the number 2 on your keyboard. If you’d like a capital, make sure to hold “shift” while selecting your vowel, as you normally would. 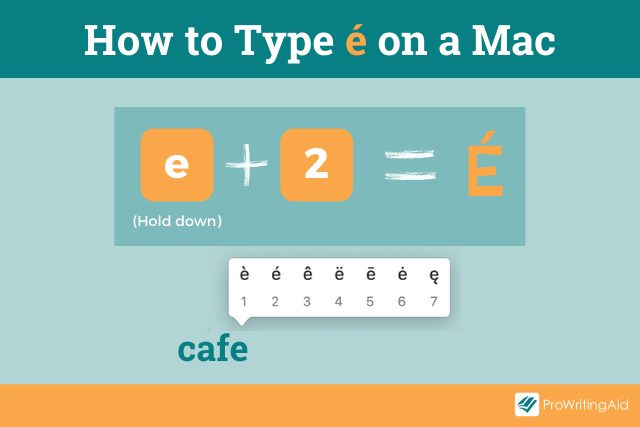 How Do I Type É on Windows?

This method is a bit more archaic, in my opinion. You must hold down the “alt” key and type a three-number code to get your desired letter. You can use your numeric keypad or regular number keys to do this. The code for our titular letter is 130. Here are the rest:

This is why I own a Mac. 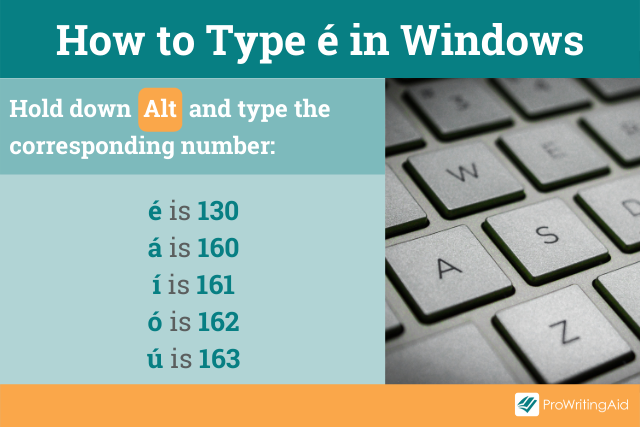 How Do I Type É in Microsoft Office?

Oddly enough, this one is more similar to Mac than Windows. To type é in Microsoft Word, PowerPoint, Excel or Outlook, hold “Ctrl,” press the apostrophe key, release “Ctrl,” then press e (or your letter of choice).

How Do I Type É in Google Docs?

It’s a bit of a workaround, but you can create accented characters in Google Docs without pressing a single key. In the main navigation, click “Insert,” then “Special characters.” 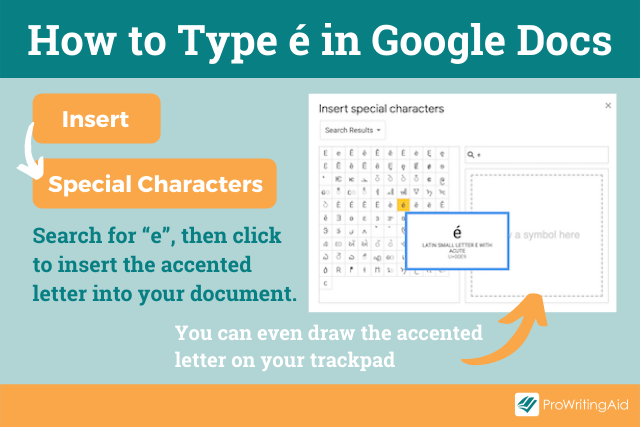 Current iPhones make this easy. When texting, simply tap and hold the desired vowel until a string of new characters appears.

Then slide your finger over to the one with the acute accent and release. (Be sure not to select the grave accent on accident, since they’re right next to each other. We’ll explain that one soon.)

How Do I Type É on Android?

Unlike iOS, Android doesn’t come preloaded with support for accented characters. However, there’s an app for that—several of them, actually.

Simply head to your app store and search for a “smart keyboard.” Choose whichever you like best, install it, then type accents, acute or otherwise, whenever you need.

(I’ll admit, the phones are corner-cases, since if you’re texting or tweeting, your recipients will probably not miss the é in “resumé.” Yet I’ve added these instructions for the sake of thoroughness.)

What’s the Quickest Way to É?

Since some of these key strokes are difficult to remember (or downright cumbersome), I’ve got a cheat for you.

It’s simple: copy and paste. No matter where you’re writing, this option should be available to you.

If you have internet access, try Googling “e with an accent” (or whatever letter you need), then copy and paste it from the results page. I even used this method for this article!

What Is the Difference Between É, È, Ê, and Ë?

The grave accent is almost exclusively used in French; it marks letters that should be pronounced as an “eh” sound, not treated as silent. Such instances can arise in French, but since this article is about English, we won’t go any further. Suffice is to say that when writing English, é (acute accent) is almost always preferred to è (grave accent).

E with the little carrot on top, ê, is known as a circumflex accent. The circumflex denotes a letter that used to have another letter following it, but the subsequent letter has since been omitted in modern spelling. This subsequent letter is almost always “s.” So, the word “fête” actually used to mean “feste,” as in “festival,” which is where the definition of the word comes from.

Finally, let’s look at ë. The two dots above the e here are tricky, because they are either an umlaut or a diaeresis, depending on context. The distinction is lengthy and outside the purview of this article, but if you’d like to learn more, try this article. 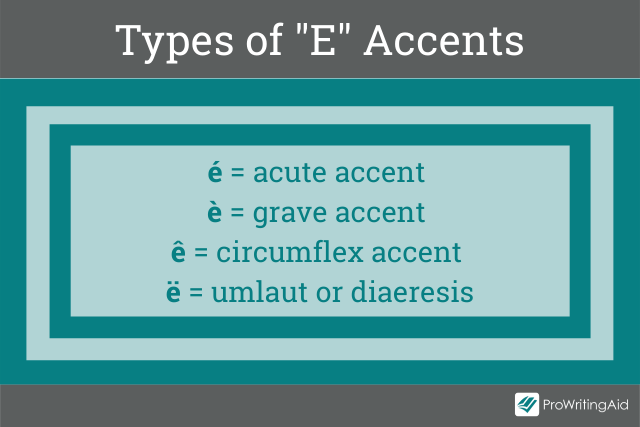 The acute accent on the letter e is one of the rarest punctuation marks in English. Still, it’s important to know when and how to use it. We hope this article has been helpful in that respect!

potato3
What version of Android/what keyboard do you have installed? Gboard is the default on most devices, and it has had the hold-down-for-accents implemented for most of the past decade.

mandjtalbot
I quote your words 'acute accents can appear above any vowel so long as they are necessary' - can you give me any examples of words with a, i, o or u with an acute accent?

kyle.kucera1
Hey there! Thank you for your comment! There are many different languages where acute accents are used above the letters a,i,o, and u.
Wow nice information! Thanks forsharing.

kyle.kucera1
Thank you for your comment! We're so glad we could help you! :)