Blog Grammar Rules Conventional Grammar: What It Is and 5 Rules NOT to Follow

Conventional Grammar: What It Is and 5 Rules NOT to Follow 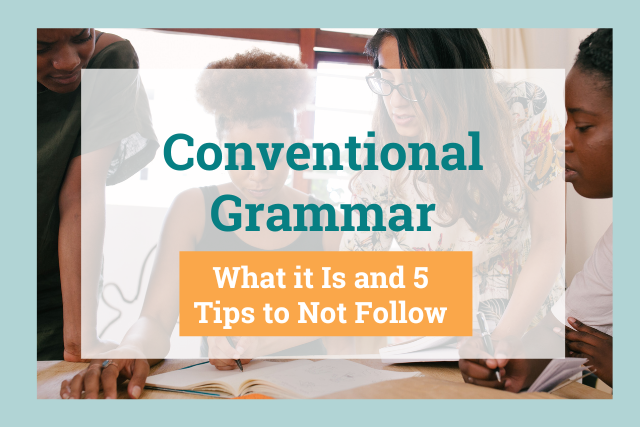 Grammar has a prescribed set of rules. But as language changes, so do the rules you need to follow.

Today, we’re learning what conventional grammar means and which rules you can ignore in your writing.

And for all those grammar rules you should always follow, you can use our free grammar checker.

What Is Conventional Grammar? 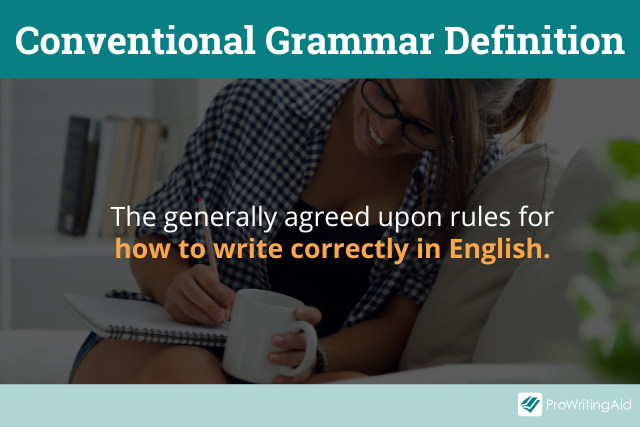 Whatever you call it, conventional grammar refers to the rules for accepted usage of spelling, grammar, syntax, and mechanics.

Some languages have an official academy that decides on accepted standards for grammar, but English does not.

Instead, many grammarians, linguists, universities, and style guides have reached a general agreement that evolves over time.

Of course, there are still plenty of grammar mistakes that you should avoid.

But some rules might still be considered conventional wisdom in the writing world, despite the fact they aren’t practical or have fallen out of style.

Language changes. You might have learned some rules in school only a decade or two ago, but here are five conventional grammar tips you don’t need to follow anymore. 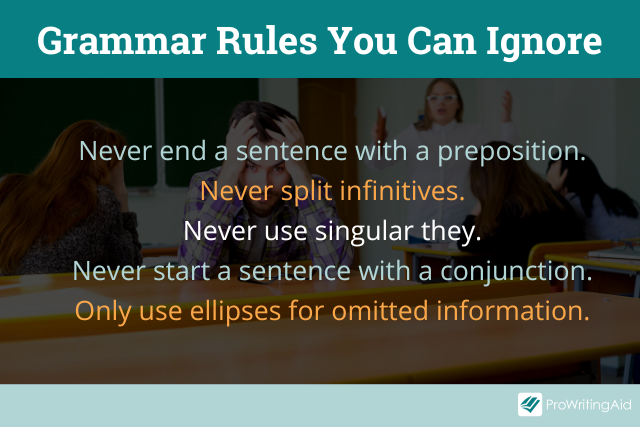 Standard syntax rules say you should never end a sentence with a preposition. However, rewriting sentences to follow this rule will often make your writing sound unnatural.

Here are a few examples of sentences that end in prepositions and how they would sound otherwise.

The sentences that don’t end with a preposition sound antiquated. Grammar exists to make communication clearer and easier, so consider this conventional rule out of date.

An infinitive verbal is “to” plus the base form of a verb, e.g. to run and to swim. Splitting an infinitive means putting an adverb between “to” and the verb. For instance, you might say, “to quickly run.”

The alternatives to this example would be: “quickly to run” or “to run quickly.”

The first alternative is not standard English. The second alternative is grammatically acceptable, but it may negatively affect the flow of your writing.

While some people still feel strongly against split infinitives, most people agree that it’s fine to break this grammar tip.

Some people believe you should only split infinitives as a rhetorical device to provide added emphasis, but others think it’s an outdated rule that isn’t necessary to follow at all.

The history of the singular pronoun “they” is complicated.

Long ago, the singular “they” was widely used and accepted. Eventually, the accepted usage shifted to using “he” when someone referenced an unknown, vague, or universal gender.

That rule was sexist, so “he or she” became the standard. But the singular “they” never left the English language.

You might say, “Oh no! Someone left their bag” if you didn’t know the person’s gender.

Inclusive writing is really important, so avoiding singular “they” is a rule you can break. Unfortunately, many style guides, like the Associated Press, have not caught up to general agreement about this guideline.

ProWritingAid’s editing tool picks up on non-inclusive language and will suggest inclusive alternatives.

Using singular “they” is both inclusive and makes your writing less clunky than always saying “he or she” or “his or her.”

A common rule many of us learned in school was to never start sentences with a conjunction.

This doesn’t match how we speak now. Internet writing has led to an increase in conversational, formal writing, so this grammar tip is one you can overlook.

In certain situations, such as academic writing or technical writing, the general agreement is to break this rule sparingly.

This guidance is shifting though, so always defer to your style guide if you aren’t certain.

Ellipses have become more and more common in internet writing. Ellipses once only denoted omitted information, as in quotes.

Unlike in the previous example, you should only ignore this grammar tip in less formal situations, like online conversations, personal blog posts, and creative writing.

Because we communicate so much online, we write in the way we speak. Ellipses are useful to show trailing off thoughts and they can establish a conversational tone.

Keep two things in mind when you break this conventional grammar rule.

First, an ellipsis is only three dots. Second, break this rule sparingly because too many ellipses slow down your writing.

Standard grammar serves a purpose—it helps us communicate clearly. But it’s also fun to see how language changes over time and to break some of those outdated rules. 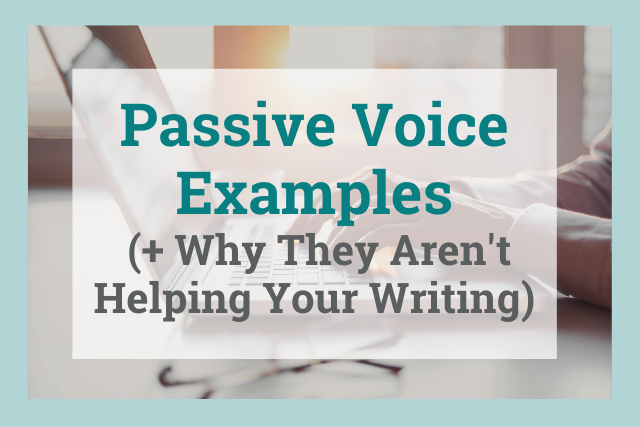 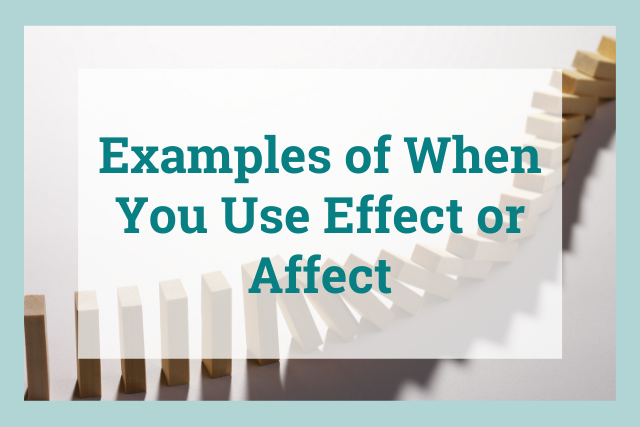 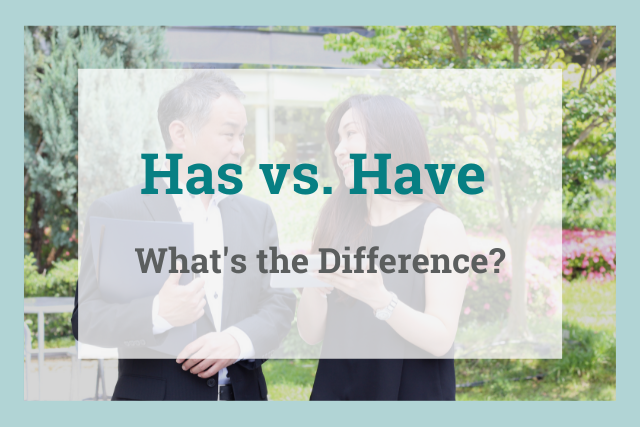 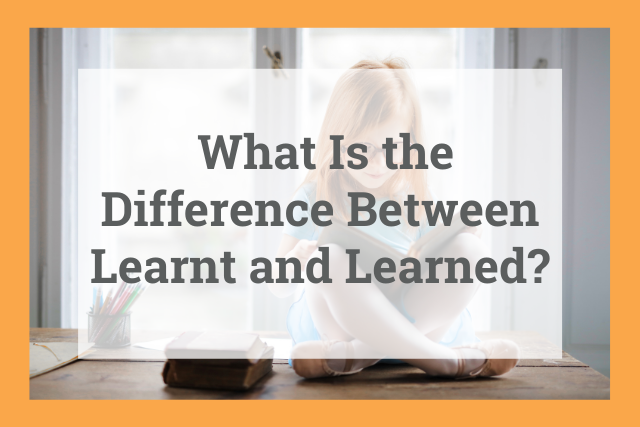 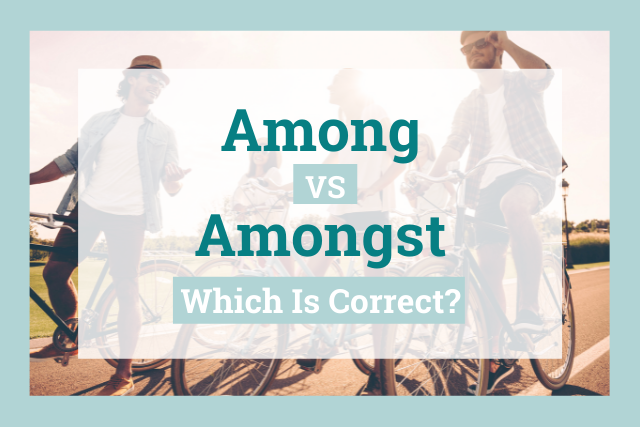