Commas are one of the most common punctuation marks in English, but they’re also one of the trickiest to use.

There are so many rules around comma usage, and they vary according to different circumstances.

For example, is it grammatically correct to use a comma before that?

You need a comma before that when the word is introducing parenthetical information anywhere in a sentence, plus a few other instances.

In this article, we’ll show you when to use commas before that, along with examples to help you get it right every time.

Is There a Comma Before That or After That?

A parenthetical element adds additional information and color to a sentence, but isn’t essential to the overall meaning.

In the example above, “that girl sitting in the red chair” provides extra information, or what’s referred to as non-essential or non-restrictive information. If you remove it from the sentence, the meaning remains the same.

Parenthetical phrases always need enclosing with punctuation marks. These can include commas, curved brackets, square brackets, or dashes. These punctuation markers are a useful way to identify non-restrictive information. 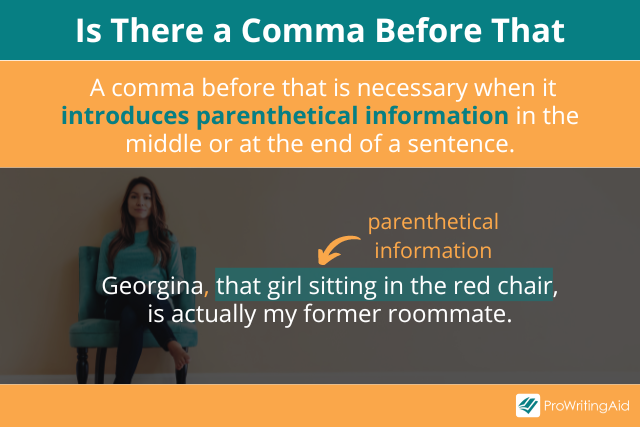 When to Use a Comma Before That

A comma before that is necessary when it introduces a parenthetical phrase in the middle or at the end of a sentence. For example:

Another way to use a comma before that is when writing the parenthetical phrase that is. This is a shortened version of that is to say.

Here, the clause that is is an introductory parenthetical phrase within a larger parenthetical element—one that begins with that and ends with Argentina.

It’s also grammatically correct to include a comma before that when it’s used in the middle of a list. Normally, a comma would not precede the first term in a list.

When to Use a Comma After That

A comma after that is necessary if it occurs at the end of a parenthetical element in the middle of a sentence. This is because the comma is acting as a closing parenthetical comma.

If the parenthetical phrase occurred at the end of the sentence, there would be a period after that, rather than a comma.

You should also use a comma after that when it’s a term at the start or in the middle of a list. In the example below, the comma is acting as an Oxford comma, rather than a parenthetical comma.

No Comma Before That or After That

So when shouldn’t you use a comma before or after that? When there’s no need for a parenthetical comma, or when that is not part of a list.

This means you shouldn’t use a comma when that is functioning as an adjective, pronoun, determiner, adverb, or conjunction.

In particular, you shouldn’t use a comma before or after that when it’s used to join the main clause with a restrictive relative clause.

Incorrect: Your mom mentioned, that you were upset.

Incorrect: Your mom mentioned that, you were upset.

Correct: Your mom mentioned that you were upset. 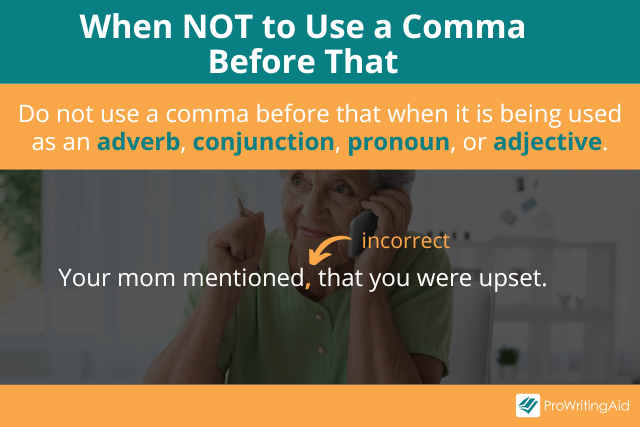 Parenthetical elements are nonrestrictive clauses because they contain information that isn’t essential to the meaning of the sentence. That’s why we use commas or another type of parentheses to set these phrases apart.

Notice how a comma is not appropriate before or after that in this example:

Examples of That in Sentences

Let’s look at a few grammatically correct examples of how to use a comma before that.

Final Thoughts on Comma Before That

Let’s summarize what we’ve learned about the correct way to use a comma before that.

If that introduces a parenthetical expression, then it must be preceded by a comma. You should use a comma before that if it appears in the middle of a list too.

Other than these two instances, there’s no need for a comma before that if it’s carrying out its other functions—as an adverb, pronoun, determiner, conjunction, or adjective.

If you’re concerned about making grammatical mistakes in your work, ProWritingAid will pick up any instances of missing or misused commas.

moccorozz
Thank you for being here ! I need the help in not looking dumb , when I text someone , Even though I am in the older Generation . Please excuse my first time mistakes .