Comma Before or After Parenthesis: Correct Usage Explained 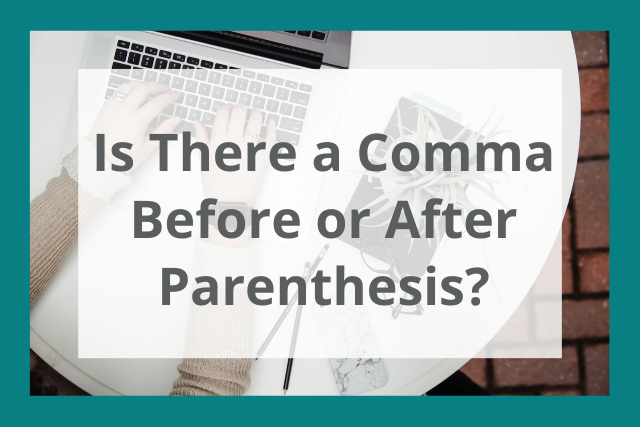 English comma rules can be confusing. Even the most confident writers sometimes struggle to remember when and how to use them.

For example, should you use a comma before or after parentheses?

Generally, you should only use a comma outside a closing parenthesis, though there are some exceptions to this rule.

In this article, we’ll teach you when and how to use a comma with parentheses and show you some examples of it in action.

Parentheses are a pair of round brackets ( ) used to separate a parenthetical word or phrase from a sentence. They’re used to enclose additional information in a sentence, or show that the information is an aside.

Let’s look at when to use punctuation inside parentheses.

If the information inside the parentheses contains a list, you should separate the items with commas.

However, if the information inside the parentheses doesn’t form a complete sentence, you shouldn’t include a period inside the closing bracket.

When the parenthetical element occurs at the end of the sentence, the period should go outside the closing parenthesis to bring the sentence to a close.

Want to make sure grammatical errors don’t sneak into your work? ProWritingAid can highlight incorrect uses of punctuation inside parentheses in your writing. 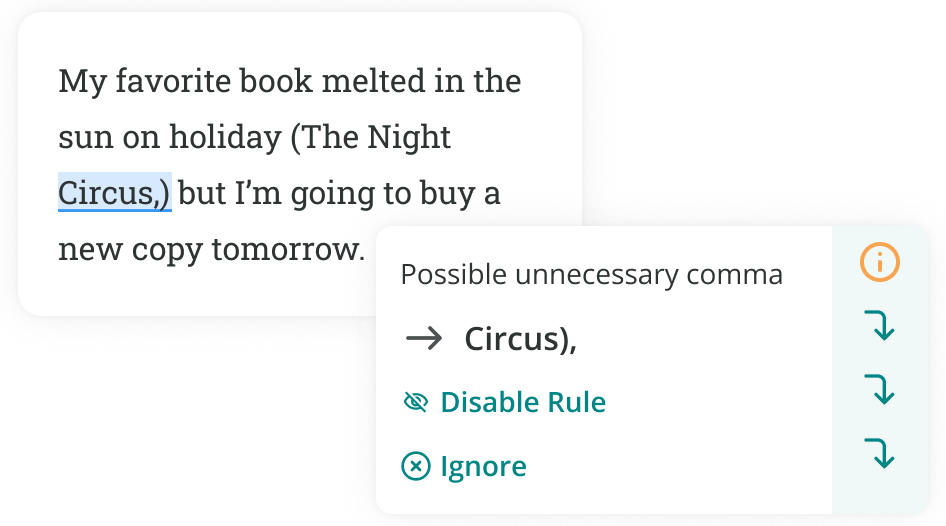 Do You Need a Comma After Parenthesis?

Parentheses don’t always need to be followed by a comma, but there are some instances where it is grammatically correct to do so.

You should use a comma after the closing parenthesis if the sentence would need a comma without the parentheses.

Here are the instances where it’s suitable to use a comma after a parenthesis:

1. When the parentheses are part of the introductory statement

An introductory phrase is a clause without a subject and verb. It is typically followed by a comma, which shows that the main idea of the sentence is yet to come.

If a parenthetical element is a part of the introductory phrase, a comma will come after the closing bracket.

2. When the parentheses are part of a compound sentence

A compound sentence is made up of two independent clauses joined by a coordinating conjunction (for, and, nor, but, or, yet, or so) and a comma.

If parentheses are introduced at the end of the first independent clause, a comma will follow the closing parenthesis. This is because the comma would’ve been part of the sentence regardless.

3. When the parentheses are part of a complex-compound sentence

A helpful way to remember the correct usage is to look at the sentence as a whole. If you removed the parentheses, would there still be a comma? If the answer is yes, you should include a comma after the closing bracket.

Written without the parentheses, this sentence still requires a comma to separate the clauses. 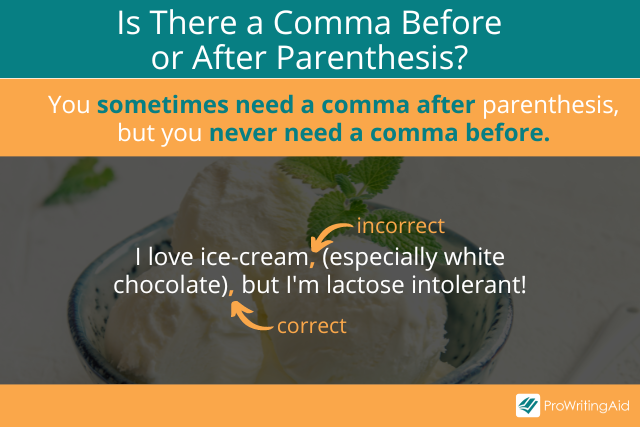 Examples of Commas Used After Parenthesis

Here are a few examples of commas used after a closing parenthesis in a sentence:

Do You Need a Comma Before Parenthesis?

In most instances, it’s not grammatically correct to use a comma before parentheses. Take a look at the examples below:

Incorrect: Jamaica has some of the Caribbean’s most beautiful beaches, (especially in Negril) but many of them aren’t well known by the public.

In this sentence, the comma should come after the closing parenthesis.

Correct: Jamaica has some of the Caribbean’s most beautiful beaches (especially in Negril), but many of them aren’t well known by the public.

When NOT to Use a Comma with Parentheses

If a sentence doesn’t require a comma, then you shouldn’t include one when you add parentheses. For example:

Comma Before or After Parenthesis: Conclusion

The standard rule is that commas should not be used before parentheses. Commas can be used after the parenthetical element if they would’ve been part of the sentence structure already.

A good way to decide if you should use a comma after the closing parenthesis is to remove the parentheses and see if the sentence still requires a comma.