Can You Start a Sentence with However? 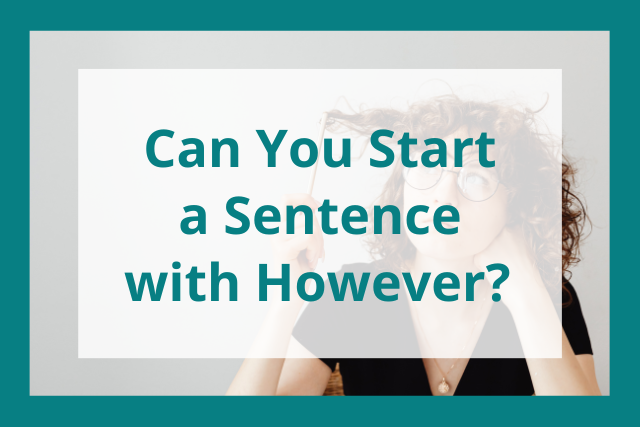 Many people wonder if the English language allows you to start a sentence with however.

The answer is yes! It’s grammatically correct to start a sentence with however, as long as you make sure you’re writing a complete sentence.

Read on to learn more about how to start sentences with however.

So, How Can You Start a Sentence with However?

There are two ways to use however at the beginning of a sentence. One way is as a conjunctive adverb that means but. Another way is as a word that means no matter how.

Let’s take a closer look at each of these possibilities.

The first option is to use however in a way that means but or “in spite of that.” In this case, the word however functions as a coordinating conjunction to contrast that sentence with the previous one. 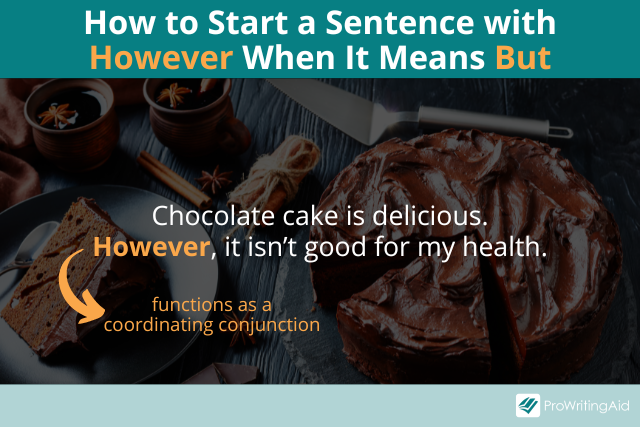 For example, imagine you want to tell someone why you can’t eat the chocolate cake they’re offering you.

In this case, the word however is a transition that cues the reader that the second sentence, “It isn’t good for my health,” will stand in contrast to the previous sentence, “Chocolate cake is delicious.” However links these two independent clauses together to form a complete idea.

Here are some other examples of sentences that begin with this version of however:

Now let’s look at the second option, which is to use however in a way that means “no matter how” or “in whatever manner.” 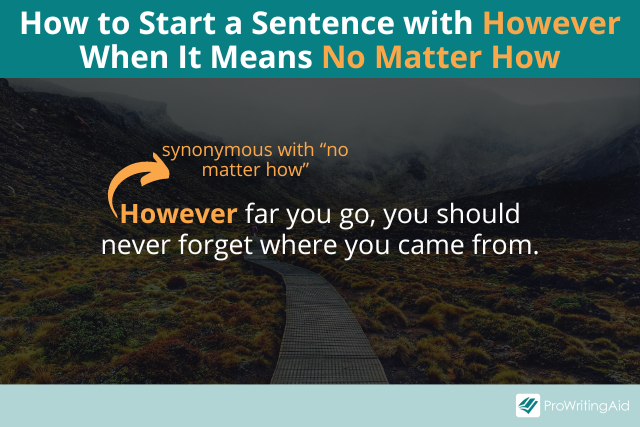 Here are some other examples of sentences that begin with this definition of however:

Examples of Starting a Sentence with However

The best way to learn grammar is by reading plenty of real-world examples.

Here are some examples of sentences from English literature that begin with the word however.

“It is known that there are an infinite number of worlds, simply because there is an infinite amount of space for them to be in. However, not every one of them is inhabited.”—Douglas Adams, The Restaurant at the End of the Universe

“When I visited Ledgers and Lists, I discovered he only taught one class: Unlikely Maths. However, this was less than helpful in tracking him down, as according to the ledger, the time of the class was ‘now’ and the location was ‘everywhere.’”—Patrick Rothfuss, The Name of the Wind

“I am able to partition parts of my intellect into a discrete packet, which then conducts the test as instructed. However, I am willing to submit to such a test from you.”—Saad Z. Hossain, Cyber Mage

“At a distance, it might have seemed as if my entire summer was occupied with time at Daisy’s and a rather remarkable party at Gatsby’s. However, it was a crowded summer, and it was not until later, when I could thread the steps to disaster together like glass beads on a string, that those times stood out at all.”—Nghi Vo, The Chosen and the Beautiful

“As long as some creature experienced joy, then the condition for all other creatures included a fragment of joy. However, if any living being suffered, then for all the rest the shadow could not be entirely cast off.”—Philip K. Dick, Do Androids Dream of Electric Sheep?

“They deliberately shunned anything good—girls, sports, feasting and family life. However, Jack had noted, the happiest among them had usually found some pursuit that gave deep satisfaction: illustrating manuscripts, writing history, cooking, studying philosophy, or—like Philip—changing Kingsbridge from a sleepy village into a thriving cathedral city.”—Ken Follett, The Pillars of the Earth

“Many people, few ideas: we all think more or less the same, and we exchange, borrow, steal thoughts from one another. However, when someone steps on my foot, only I feel the pain.”—Milan Kundera, Immortality

“People can do great things. However, there are some things they just can’t do. I, for instance, have not been able to transform myself into a Popsicle, despite years of effort.”—Brandon Sanderson, Alcatraz Versus the Evil Librarians

“This is not our real life. However bad things got, they had that to keep them going.”—Laini Taylor, Muse of Nightmares

“However mean your life is, meet it and live it; do not shun it and call it hard names.”—Henry David Thoreau, Walden

What Is Another Word for However?

However is an adverb that means “in spite of that.” Common synonyms for this meaning of however include but, nevertheless, nonetheless, still, although, though, and even so. 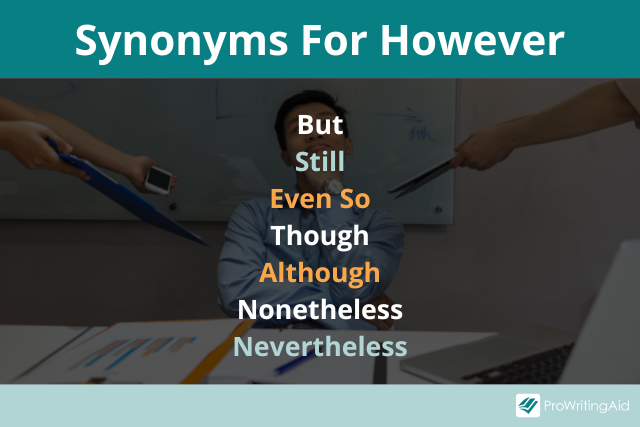 If you’re using however to mean “no matter how,” then some common synonyms include anyhow and regardless.

You can try swapping out however for some of these common synonyms to see if your sentence still makes sense. You can also use these synonyms to avoid using however too many times in the same piece of writing, which might feel repetitive to readers. ProWritingAid’s Word Explorer can help you find alternative words to use in your writing. 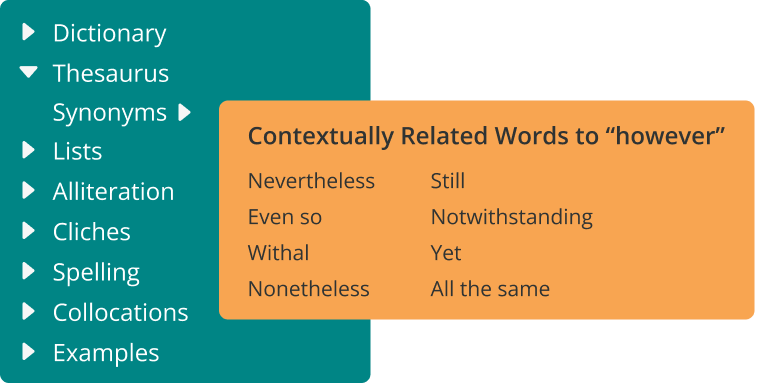 Tips for Using However in a Sentence

When you use however to start a sentence, you need to follow proper punctuation rules. How to punctuate the sentence depends on which meaning of however you’re using.

If you’re using however to mean the same thing as but, you always need to use a comma immediately after however. For example, you should write, “Julia is doing great in school. However, Jason’s grades are abysmal.”

If you’re using however to mean no matter how, you should never use a comma immediately after however. For example, you should write, “However hard Jason tries, he just can’t get his grades up.”

Conclusion: Can You Start a Sentence with However?

Now you know everything you need to use however to start a sentence. However, it’s still a good idea to run your work through ProWritingAid to check for grammar errors, just in case you’ve missed something!