Can You Start a Sentence with And or But?

If your high school English teacher drilled into your head that you should never start a sentence with and or but, you’re not alone. Most of us learned this rule in school, and we followed it in every writing assessment, research paper, and book report we ever wrote.

So, if it’s improper to start a sentence with the words “and” or “but,” then why do so many prolific authors, bloggers, journalists, and copywriters do it? It might seem like a rebellious move, but it’s not really “against the rules” at all.

It’s perfectly acceptable to start sentences with and or but as well as any other coordinating conjunctions. No grammar checker will mark it as incorrect.

Today, we’re taking a closer look at when and how to begin sentences with coordinating conjunctions like and or but.

Can You Start a Sentence with And? 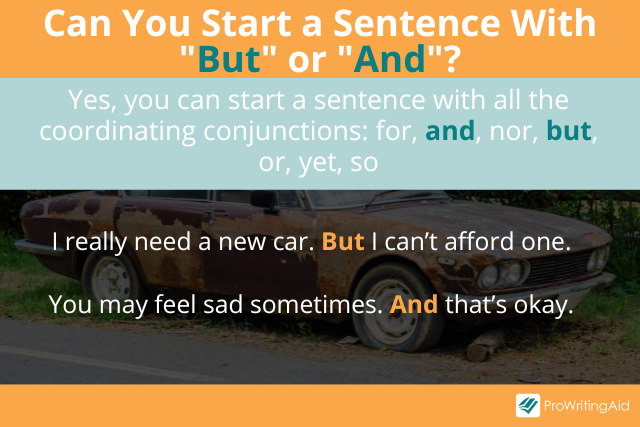 There are seven coordinating conjunctions:

However, the ones we were specifically taught to avoid starting a sentence with are “and” and “but.” The good news is you can rest easy knowing there is no true grammar rule saying you can’t ever start a sentence with one of these conjunctions.

And can connect two sentences, but there’s no rule that says it has to connect them within the same sentence using a comma. Instead, and can start its own complete sentence.

Examples of Starting Sentences with And

Let’s check out some examples of and at the beginning of a sentence.

Can You Start a Sentence with But?

Both usages are grammatically correct in the English language. In fact, it’s often the best way to avoid verbose or run-on sentences.

Examples of Starting Sentences with But

Here are some examples of sentences that begin with but:

General Rules on Starting a Sentence with Conjunctions

Realizing now—ten, twenty, or even thirty years later—that you were lied to might be frustrating, but your teachers really did have your best interests in mind.

While there is no definitive answer as to why we were taught this “rule,” the explanation that makes the most sense is that it was meant to prevent children from writing the way they talk.

Think about it—have you listened to a child or teenager talk for any extended amount of time? If you have, then you can understand exactly what these teachers were trying to avoid.

If you haven’t, these two examples will provide some insight:

It’s one thing to verbally hear a story told in this fashion. But reading it is an entirely different experience. No matter what the word is, you never want to start too many consecutive sentences with the same word.

The overuse of and and but in spoken English is likely the main reason our teachers forbid us from starting a sentence with them in our writing!

It’s best to avoid starting too many sentences with and or but, especially if they are close together. ProWritingAid can help you find repeated sentence starts and echoes, which are repeated words in close proximity. 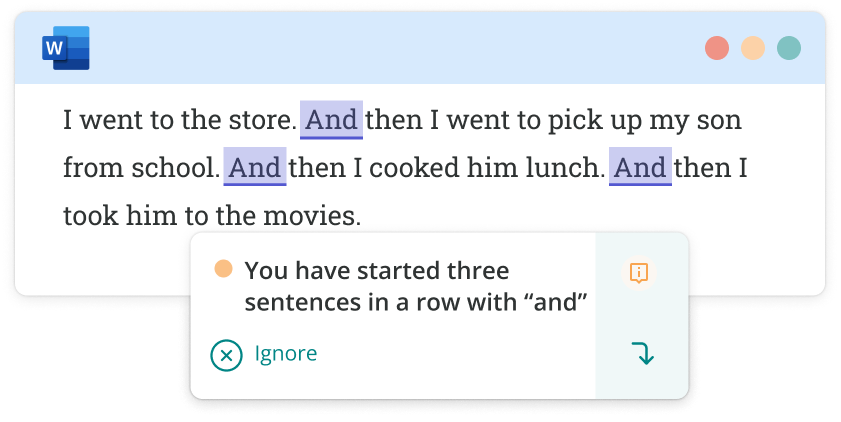 When Should You Never Start a Sentence with a Conjunction?

There’s no hard rule about when you should never start sentences with conjunctions. But there are some basic guidelines to follow.

You should also avoid using and or but to begin a sentence in technical writing. This doesn’t mean you can’t use these words at the start of a sentence, but you should use them less frequently than in other types of writing.

Examples of Starting Sentences with Conjunctions

Other conjunctions are also acceptable to begin sentences. Here are some examples of other coordinating conjunctions that start a sentence:

Conclusion: Can You Start a Sentence with And or But?

In short, it’s absolutely fine to begin sentences with and or but. There’s no official grammar rule against it. But like any writing convention, be careful not to overuse and and but as sentence starts, and don’t use them with sentence fragments in formal writing.