As Above, So Below: Meaning & Usage 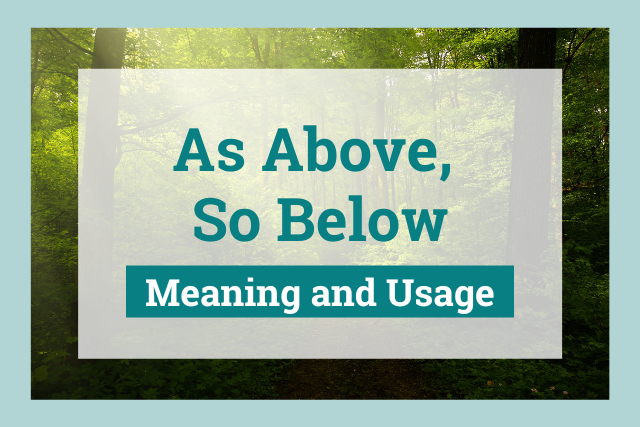 The phrase "as above, so below" is an ancient quote to describe the idea that what happens in a higher realm or plane of existence also happens in a lower realm.

It comes from an ancient piece of writing called the Emerald Tablet.

To understand the meaning of "as above, so below," we have to take a brief look at history and philosophy.

In this article, we're diving deep into this phrase's meaning and origin, as well as how to use it in sentences. 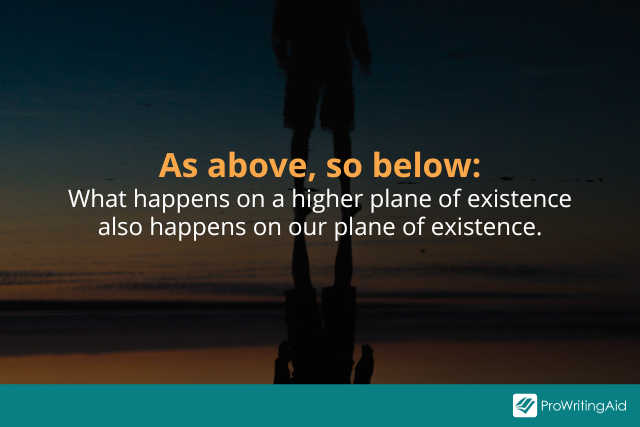 What Does "As Above, So Below" Mean?

The exact "as above, so below" meaning isn't clear because the phrase has been co-opted by so many different belief systems.

However, all the phrases are based around the same idea: What happens in a higher or large sense will also occur in a lower or small sense.

When Christians use the phrase "as above, so below," it's often meant almost as a wish. They want things on earth to be like what happens in heaven.

You can see this idea phrased a different way in the Lord's Prayer:

"Thy kingdom come, Thy will be done, on Earth as it is in Heaven..."

It's the same idea. Christians will use "as above, so below" as a way to invoke God's will.

Various metaphysical and occultist religions also use the phrase "as above, so below," but with different meanings.

Instead of invoking the will of heaven, the phrase might refer to an astrological idea that the planets and stars affect what happens here on earth.

It can mean that what happens in the physical world mimics what occurs on a different astral plane or in the spiritual world, which is very similar to the Christian usage.

Certain metaphysical beliefs center around repeated patterns in nature. "As above, so below" can refer to what's happening inside the human body mimicking what is happening in the wider world.

For example, some people believe that humans get sick because the earth is sick.

"As above, so below" can also be a thought-terminating cliché, which is a phrase meant to provide an easy answer to keep people from questioning complicated topics.

It's simple to answer hard questions such as, "why do people get cancer?" or "why is there evil in the world?" with a phrase like, "as above, so below."

Speaking of clichés, ProWritingAid has a Cliché Report which will find overused phrases that make your writing sound trite.

You can then find new ways of expressing the same ideas to liven up your writing. 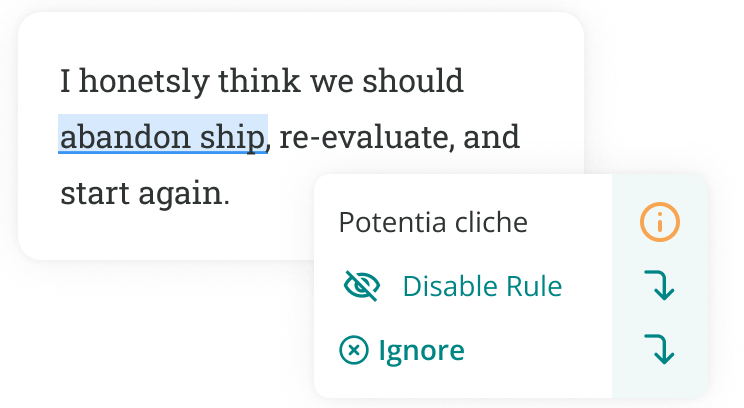 What Is the Origin of "As Above, So Below?"

It's impossible to truly understand the complicated idea of "as above, so below" without understanding its origins.

We have to travel back in time to the first millennium CE in Ancient Greece and Arabia.

The Emerald Tablet of Hermes Trismegistus 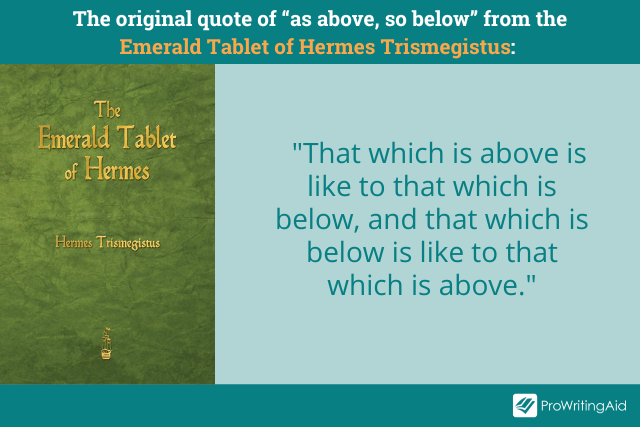 The "as above, so below" origin dates to sometime between 200 CE and 800 CE. It is attributed to an ancient document called the Emerald Tablet of Hermes Trismegistus.

Hermes Trismegistus is a mythical figure, not one person. He's a combination of the Greek god Hermes and the Egyptian god Thoth.

Like the other Hermetic texts, it's impossible to accurately date the Emerald Tablet. There are early translations in Arabic from around 800-900 CE.

Indeed, it's possible that the phrase "as above, so below" came from earlier Arabic texts instead of the Emerald Tablet.

In the Middle Ages, the Arabic version was translated into Latin, then into English a few centuries later. Here's the original English translation:

You can see that the phrase "as above, so below" has been shortened in modern usage. It's a parallelism that shows that things in the celestial realm are the same in the earthly realm.

The Emerald Tablet was a significant influence in Renaissance and Enlightenment philosophies and was also important in the work of alchemists during this time.

"As above, so below" is an esoteric belief that can feel convoluted to understand.

Let's look at the beliefs of the ancient religion of Hermeticism to figure out what "as above, so below" originally meant.

Hermeticism was an early monotheistic and pantheistic religion. God, or "the All," is both everything in existence and the creator of existence.

There are three guiding principles of Hermeticism that are mentioned in the Emerald Tablet. These help illuminate the meaning of "as above, so below." 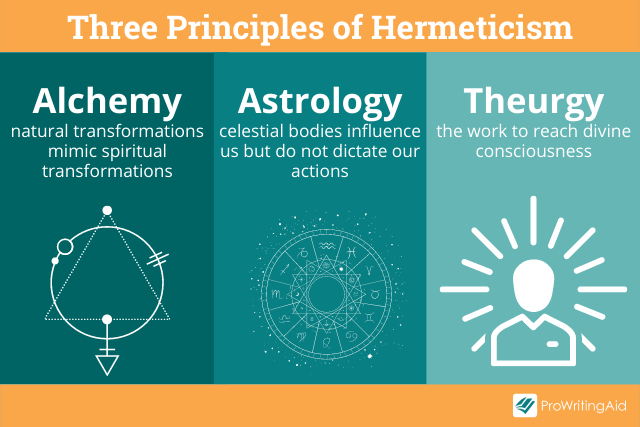 The first principle is alchemy. The traditional definition of alchemy is the pursuit of turning lead into gold.

But in Hermeticism, it's about major transitions, such as between states of matter or existence. Natural processes like fermentation are likened to spiritual changes in the human body.

Hermetics also believe in astrology. They believe that celestial bodies influence life on earth, but they do not dictate our actions.

Finally, theurgy is the practical application of alchemy. It's "the science of divine works." The goal of theurgy is to achieve divine consciousness.

In these principles, you can see the idea of "as above, so below."

Natural processes echo spiritual changes. The stars and planets influence earth, and people can work to achieve a higher consciousness.

Some Hermetic ideas, like the idea of "as above, so below," were adopted by early Christians and other monotheistic religions.

And many of the metaphysical concepts are still seen in the Esoteric tradition, modern Occultism, and other New Age philosophies.

Examples of "As Above, So Below" in Sentences

Let's take a look at how "as above, so below" might be used in sentences.

You don't have to have read the Emerald Tablet or be an Esoteric philosopher to use "as above, so below."

But understanding where this phrase came from can help you comprehend the significance of this common proverb.