Inter vs Intra: How to Use Each Prefix Correctly

Inter and intra are confusing prefixes because they look so similar to one another. Because of this, they can be hard to tell apart. But what really is the difference?

Luckily, there are some pretty obvious differences between the two, and with a little practice, you’ll find that they are actually quite easy to use correctly. So, just read this guide and let us coach you through it like the person with the whistle at your intramural softball game. (Or was it an intermural league?)

Let’s start with the definitions: 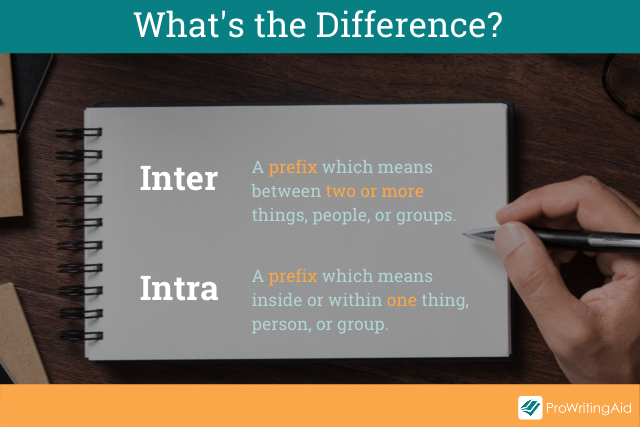 An easy way to remember this is that inter sounds like enter, and to enter, you have to first be somewhere else. So inter always implies that something goes through at least two places. (Think interstate, which is a highway that goes between different states.)

In my example above, you can remember if the league was intramural or intermural by thinking about who you played:

If it’s still a bit confusing, don’t worry. Let’s take a closer look at each prefix in turn.

Let’s start with inter. Remember, this one means that more than one group or thing is involved. 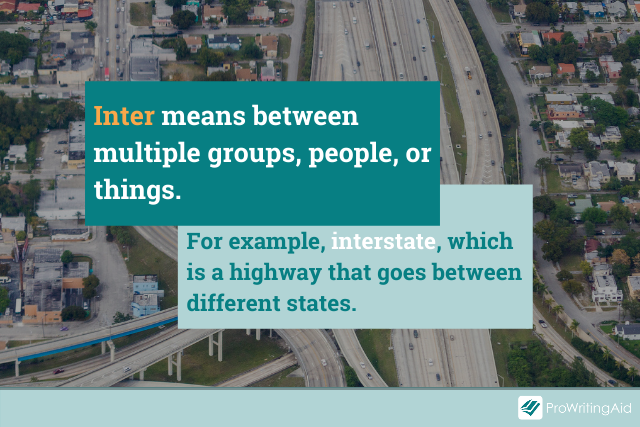 Here are ten very common inter words that will help you remember this prefix:

While these words can seem completely unrelated at times, they all have something very important in common: They involve at least two people or things. That’s why they use inter- as their prefix.

Now that inter is clear, let’s look at intra and see if we can make that one just as simple!

Now let’s look at intra. This one is much more personal. It doesn’t work well with groups or outside objects. 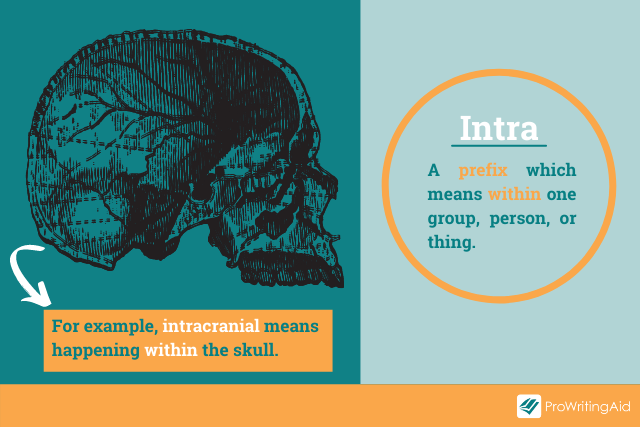 Here are ten common words that will help you understand the prefix intra:

These words use the prefix intra because they go within one item or thing. So to keep up with this prefix, all you need to do is ask yourself if you are talking about something going within one thing or person or between two people or things. If it’s the former, then use intra. If it is the latter, use inter. However, that doesn’t mean there aren’t words out there that will confuse you.

In the next section, let’s talk about some of the tricky words.

Despite all of the words above, remembering the differences between inter and intra isn’t always easy. There are a couple of reasons for this, and we’ll discuss both of them here.

Inter and Intra Are Often Each Other’s Antonyms

One of the biggest problems with trying to remember the differences between inter and intra is that they are often each other’s antonyms. 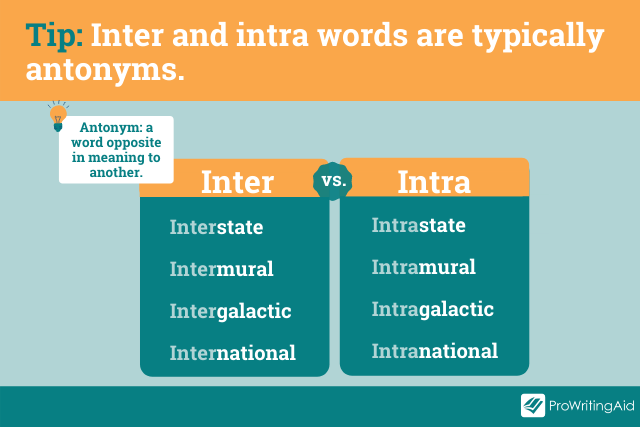 For example, we already covered the differences between intramural and intermural, but what about interstate or intrastate? International or intranational? Intergalactic or intragalactic?

All of these are words and they can complicate remembering the difference between inter and intra.

Luckily, there is an easy way to keep these apart:

Just think about the ones you know for sure.

That means, by contrast, an intrastate highway must only go within one state, intranational is only through one nation, and intragalactic must be within one galaxy.

Once you eliminate what you already know, it makes it a lot easier to figure out the rest!

So by now everything is starting to make sense. You’ve figured it all out: The difference between intra and inter is clear…

...And then you remember the word internal.

Internal makes everything confusing because, based on the definitions we’ve just learned, it seems like it should really be intranel. Right?

While it does complicate things, a good way to remember this is that prefixes go before a word. In all of the examples above, you could see the root word (state, net, cranial, etc.) In internal, there is no root word. Thus, it isn’t using a prefix. 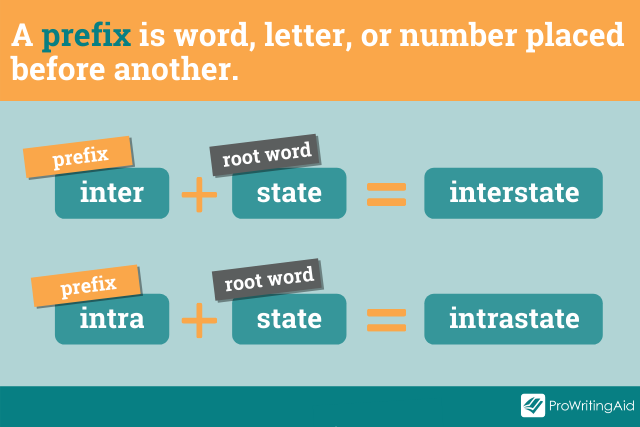 So don’t let it confuse you!

Now that you are fully fine with the differences between intra- and inter-, let’s complicate it a little more by looking at different ways to punctuate these words.

Inter, Intra, and the Complication of Hyphens

So you’re 100% sure that you should be using intracultural instead of intercultural (seeing as how you are talking about people within one culture), but now you have a new question:

Should it be intra-cultural or intracultural? (And what if you keep getting the squiggly red line on both?)

Let’s address that squiggly red line first. You’ll most likely notice this on words that are using the prefix intra. That’s because, in certain circumstances, these words are less common.

That’s okay. They are still right. And in moments of doubt, don't forget that the ProWritingAid’s Word Explorer tool is there to help you out. 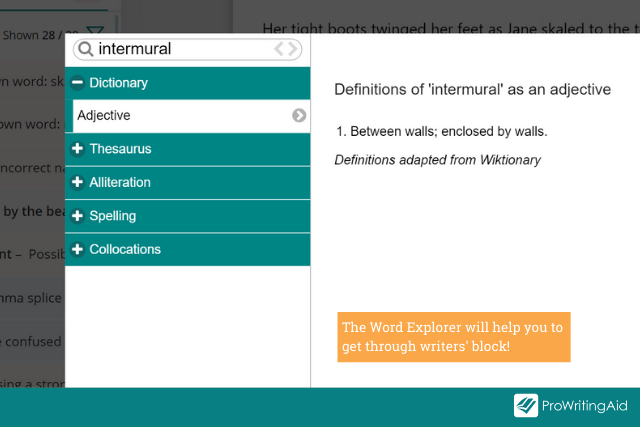 What about hyphens, though?

Well, the first rule of thumb is to always go by the style guide you are using. Many guides have sections on hyphens that will tell you exactly what words they expect to be hyphenated. Always go with the rules of the organization for which you are writing.

Outside of that, you’re probably fine not hyphenating. In general, that is the standard—which makes it really easy to remember! 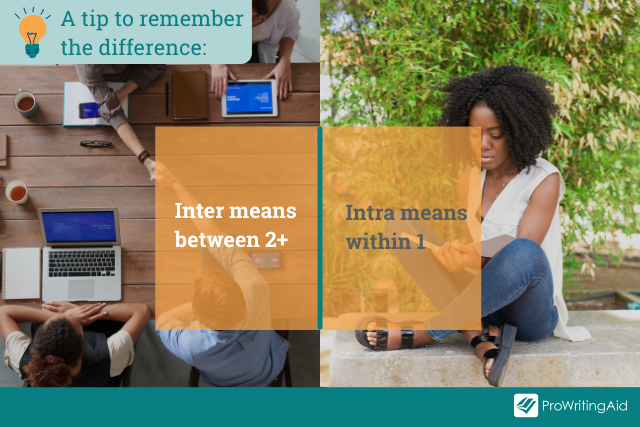 That’s all there is to it! Once you remember that inter- means between two or more things/people and intra- means within one, you’ll never have trouble with these pesky prefixes again. Of course, if you do still struggle, remember you can always use ProWritingAid to help figure out the difference!

Ashley Shaw is a former editor and marketer/current PhD student and teacher. When she isn't studying con artists for her dissertation, she's thinking of new ways to help college students better understand and love the writing process. You can follow her on Twitter, or, if you prefer animal accounts, follow her rabbits, Audrey Hopbun and Fredra StaHare, on Instagram.