Have you ever read a blog article or book with information you wanted to know, and it was almost impossible to read because the writer wanted to impress you with their intelligence?

That article or book was about them, not the subject matter. The author was trying to impress you with how smart they are. They used long words, technical terms without explanation, or worse, yet, words they made up so you could be an “insider.” They wrote long, complicated sentences. It wasn’t an informative read, and you probably didn’t finish it.

Don’t be that writer.

If you want to sound smart in your writing, be clear with your audience. Clarity is key to helping readers understand your text. Good grammar makes your sentences easy to understand. No matter how sophisticated your idea is, present it with clarity.

When you want to sound smart, using good grammar is important. Like common sense, grammar helps your reader understand without being baffled. When each sentence makes sense, it’s easy for your reader to understand your meaning.

From word choice to punctuation to citations, show your smarts by writing it right.

If you went to school but didn’t study Latin, referring to your fellow graduates can be tricky. You need to define whether they are masculine or feminine, and numbers count. One guy is an alumnus. One gal is an alumna. Many woman graduates are alumnae. And many men graduates are alumni. Following the Latin, men and women, all of them, are also alumni.

Affect is usually a verb that denotes making a change. Music affects my mood.

Effect is usually a noun naming the change. Newton’s third law of motion teaches that every action results in an equal and opposite effect.

But it’s not that simple. Affect also serves as a noun describing a person’s demeanor. Joe’s affect brightened after two cups of coffee.

And effect serves as a verb to make a change. My homeowner association voted to effect changes to parking access.

As a noun or verb, complement implies completion:

These two abbreviations stand for Latin phrases. Use e.g. when referring to examples. The abbreviation represents the Latin exempli gratia, which means for example. Follow it with examples illustrating the previous statement: Various dog breeds are known for hip problems, especially large dogs, e.g. bulldogs, mastiffs, and retrievers.

When you want to restate a phrase, i.e. is Latin for that is, id est. Use it to restate or clarify: If your foundation has white marks, you may be in danger of structure settlement, i.e. a water-damaged foundation.

These two are sometimes interchangeable, and sometimes your ear will guide your usage. There’s a grammatical adage to use farther for physical distance and further for figurative distance.

Modern speech prefers further as a verb. She took no prisoners with her cohorts to further her career. And it is the choice when used as an adverb to mean additionally. Further, I’d like to address the current invoicing procedures. As an adverb, further is also the modern choice. Since there were no further complaints, the detectives pursued their current criminal cases. 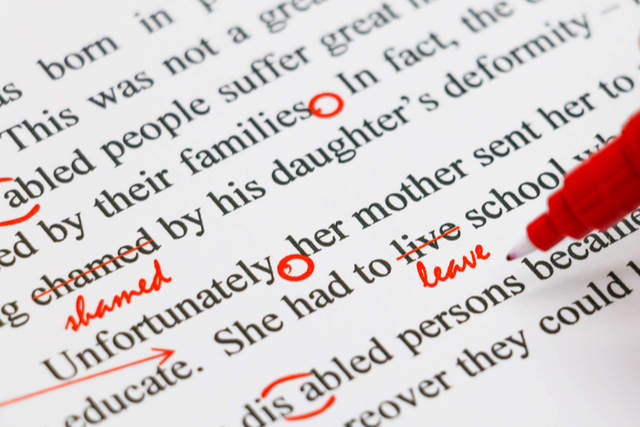 When you want to appear smarter, citing references is probably one step to verify your proposition. Italics and quotation marks set off your reference in a sentence, so your reader understands you are referring to a document. Use italics for longer works:

Use quotation marks to set off:

And, sometimes you use neither:

Don’t make your readers guess the meaning of an abbreviation. First, introduce what the abbreviation stands for before using it repeatedly in your text. You’ll help your reader understand the context. For example, Department of Aging or dead on arrival can both be abbreviated as DOA.

Your first use should include the entire phrase followed by the abbreviation or acronym: Home inspectors follow the Standard of Practice outlined by the American Society of Home Inspectors (ASHI).

ProWritingAid’s Acronym Report will tell you if you haven’t introduced an acronym, if you’ve introduced it multiple times, or if you’ve punctuated it in several different ways. 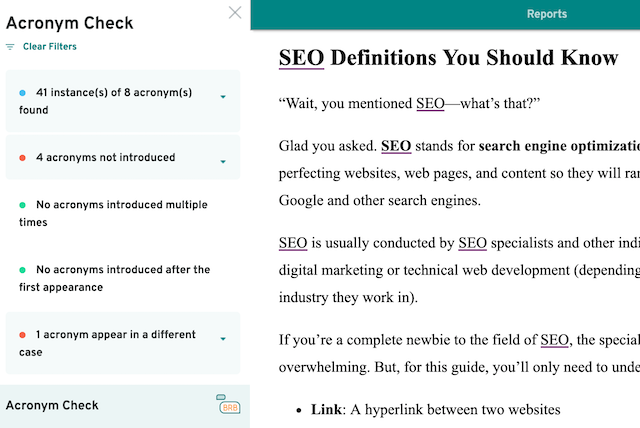 Use hyphens to join words together: broken-hearted, four-fifths, brother-in-law.

A dash, also called an em-dash or m-dash, separates parts of a sentence. Use the dash to set off a clause in a sentence when the parts of the sentence that precede and follow the clause make sense without the “extra” clause.

If I told him once, I told him a thousand times—he should have known by now—to put the dirty clothes in the laundry hamper.

And you can use the dash in place of a colon, especially for emphasis.

His living room was filled with evidence of his fitness craze—barbells, an exercise bike, and a rowing machine.

Antecedents are a word, phrase, clause, or sentence to which another word (especially a following relative pronoun) refers. When you use pronouns like it, this, and that or even he, she, or they, you need a reference noun before them. Otherwise, your reader may wonder which report or who she is. Clear it up before you use the pronoun.

According to the K-lytics report on Christmas mysteries, authors heavily advertise in order to make money on low-priced books. This report highlights the seasonal popularity of those mysteries.

Who is doing what to whom? That question sums it up.

A colon is used two ways: to make lists and to tell what you mean. When you use a colon, do not capitalize the first word after the colon.

You can use a colon to add a list to a sentence.

Colons can also be used to separate independent clauses when the second clause/sentence illustrates, explains, paraphrases, or expands on the first.

Jim realized his worst fear was coming true: his family would be homeless when they were evicted tomorrow.

Finally, you can use a colon to follow a salutation in a business or formal letter.

To the Tri-Valley Committee Chairman:

Use a semicolon to separate two ideas (independent clauses) that are closely related.

Jane thought May was inviting her to a girls night in; it turned out, Mary was planning a surprise birthday party.

Commas are the most frequently used, and misused, punctuation mark. When in doubt, look up your use. But here are four crucial guidelines to tame your comma use.

Good grammar helps your reader understand your concept. And, when you want to convey concepts, you also need to keep your syntax and vocabulary succinct. You’ll keep your reader from being confused.

In The Sense of Style, Steven Pinker said:

The key is to assume that your readers are as intelligent and sophisticated as you are, but that they happen not to know something you know.

rkortbawi1
Hello Zara Hope you are doing well. I was wondering if we could get in touch regarding a book I have in mind to publish. Actually I wrote a full script but want to turn in into a book. My email is rkortbawi@yahoo.com Hope we can get in touch. Cordially yours Roland