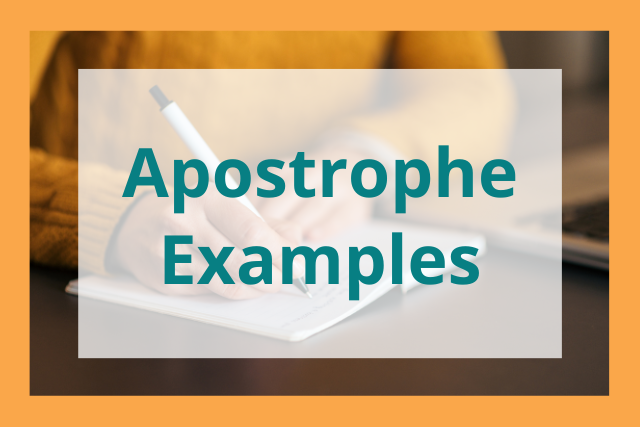 You probably know apostrophes as punctuation marks. But did you know apostrophe is also a literary device used in poems, songs, films, and even everyday life?

In this article, we’ll look at both meanings of the term apostrophe, how to use them, and some apostrophe examples from literature and popular culture.

When used as a literary device, apostrophe refers to when a speaker addresses either an absent person, or a personified inanimate object, abstract idea, or imaginary figure.

Here are the rules on how to use an apostrophe as punctuation.

Using an Apostrophe to Show Possession

Apostrophes can ‌be used to indicate possession. A noun with a possessive apostrophe is always followed by a noun or noun phrase. For example: 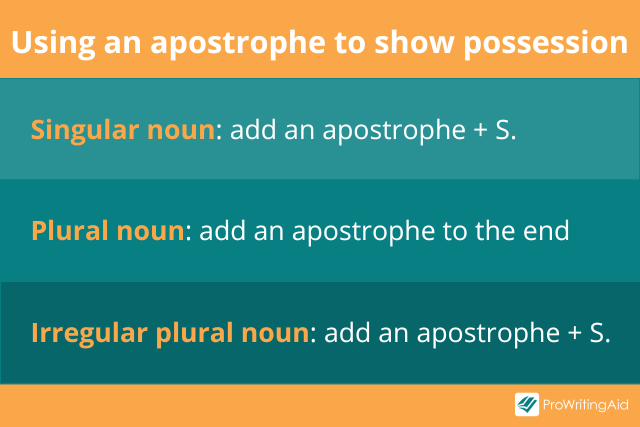 The rules for using an apostrophe vary depending on whether you’re referring to a singular noun or a plural one.

If you want to make a singular noun possessive, add an apostrophe + S.

If you want to make a plural noun possessive and it ends with an S, add an apostrophe to the end of the word.

To make an irregular plural noun that doesn’t end with an S possessive, add an apostrophe + S.

Never use an apostrophe with possessive pronouns like his, hers, theirs, ours, its.

A contraction is a shortened version of two words that are joined together by omitting certain letters. An apostrophe is used in place of the omitted letters:

These rules are simple, but mistakes happen. Run your writing through ProWritingAid’s grammar checker to catch any instances of missing or misused apostrophes. 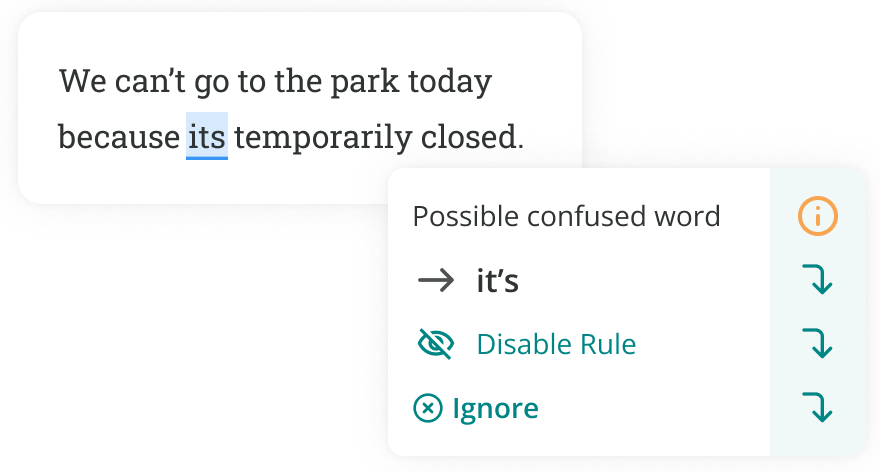 Apostrophe is also a literary device frequently used in prose, music, and poetry. In this capacity, it refers to when a writer or speaker directly addresses a person who isn’t present, or an object or idea that’s personified. 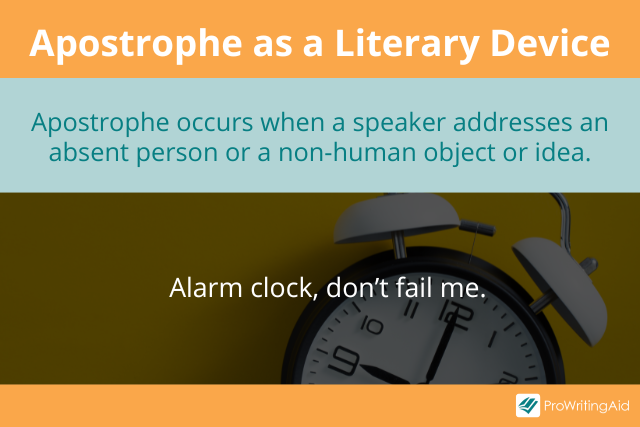 Apostrophe allows writers to provide insight into the character’s emotional state of mind. Apostrophe also helps to emphasize the significance of the item being addressed, which can reinforce the underlying themes in a piece of work.

While apostrophe is a literary device, it’s still common in everyday use. Have you ever talked to an inanimate object or an abstract concept? If you have, then you’ve used apostrophe.

Here are some examples of apostrophe as a literary device in everyday use:

The examples above highlight how apostrophe can reveal deep emotions such as joy, anxiety, love, and fear.

Here are some examples of apostrophe used in Shakespeare’s most famous works.

Here, Juliet uses apostrophe when she addresses the dagger shortly before she kills herself in Act 5 of the play.

Lady Macbeth talks to the imaginary blood spots that she has believes to be on her hands. By using apostrophe, Shakespeare gives the audience further insight into her guilt.

Apostrophe Examples in Other Poetry

Apostrophe is also a common feature in poems, especially odes and ballads. Poets usually use it to explore abstract ideas. Below, two poets speak directly to peace and death as though they were real people.

“When will you ever, Peace, wild wood-dove, shy wings shut,
Your round me roaming end, and under be my boughs?”
—Gerard Manley Hopkins, Peace

“Death, be not proud, though some have called thee
Mighty and dreadful, for thou art not so,”
—John Donne, Holy Sonnet: Death Be Not Proud

Apostrophe as a literary device has become very popular in modern song lyrics too. You’re probably familiar with some of the examples below.

“Hello darkness, my old friend
I’ve come to talk with you again.”
—Simon and Garfunkel, The Sound of Silence

In this line, a direct address to the concept of darkness helps to set the expectation for the song’s tone.

Billy Ray Cyrus laments about experiencing heartbreak by referencing his heart as a personified entity. 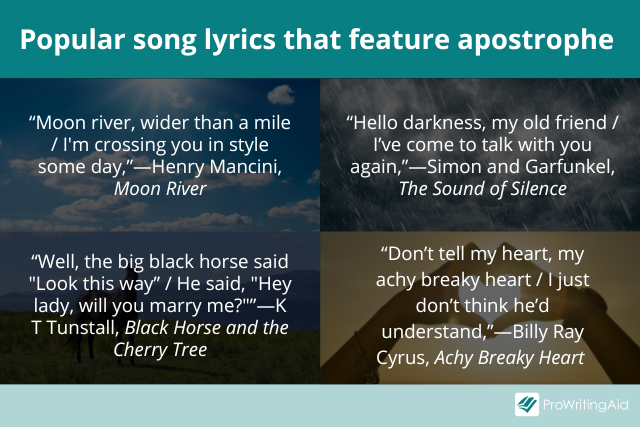 Apostrophe also makes appearances in other media, such as novels and plays. Writers often use it to allow characters to openly express their feelings when no one is around.

“Dear God, They put Sofia to work in the prison laundry. All day long from five to eight she washing clothes. Dirty convict uniforms, nasty sheets and blankets piled way over her head. Us see her twice a month for half an hour. Her face yellow and sickly, her fingers look like fatty sausage.”—Alice Walker, The Color Purple

The main character, Celie, frequently addresses God, which allows the reader a window into her mental state.

“Oh! Stars and clouds and winds, ye are all about to mock me; if ye really pity me, crush sensation and memory; let me become as nought; but if not, depart, depart, and leave me in darkness.”—Mary Shelley, Frankenstein

Victor Frankenstein is emotionally conflicted following his agreement to create a female counterpart to his creation. He addresses the stars, clouds, and winds as he breaks down in anguish.

The term apostrophe has two distinct meanings in the English language, but now you know how to use both in your writing.

Apostrophes indicate possession or mark omissions in contracted words. Apostrophe is also a literary device that occurs when a speaker addresses an absent party or a non-human object or idea.