Analog vs Analogue: What's the Difference 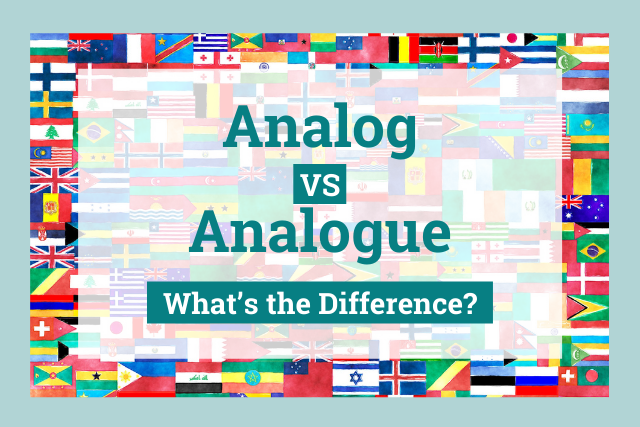 Analog and analogue are two different ways to spell the same word.

So which one should you be using?

In this article, we’ll discuss the difference between the words analog and analogue and help you remember when to use each word.

What’s the Difference Between Analog vs Analogue?

The rule for analog vs analogue comes down to the difference between American and British English.

If you’re struggling to remember which version is which, don’t forget that ProWritingAid’s Realtime Report will always be there to tell you the difference. Sign up for a free trial today to get started.

Quick Definition and Meaning of Analog

Analog can be an adjective or a noun.

As an adjective, it means the opposite of digital. Analog describes something that can have any value across a continuous range.

Digital, on the other hand, describes something that can only have certain specific values.

For example, an analog clock shows time passing by moving the hands continuously, while a digital clock only shows each minute or second passing.

Another example is that digital binary requires everything to be either a 1 or a 0; you can’t get a 0.5 or 0.11. On the other hand, an analog electronic signal varies across a continuous range.

As a noun, analog refers to “something that is like something else.” It’s related to the word analogy.

Quick Definition and Meaning of Analogue

Analogue means the same thing as the word analog.

When you’re writing for a British audience, you should use analogue with the UE, which has been the dominant form of this word in the UK for centuries. 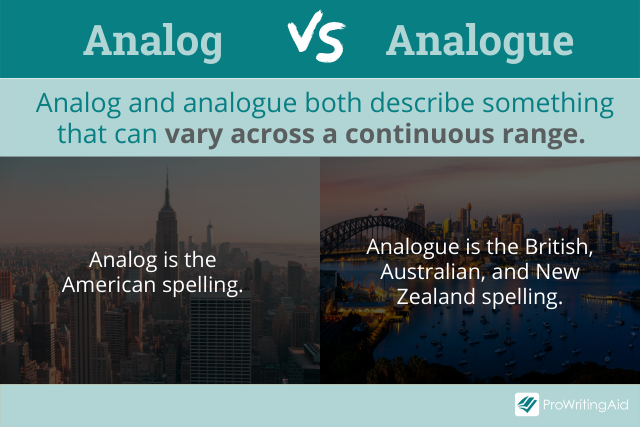 If you’re in the UK, for example, you would use the terms “analogue clock” to describe a clock with a continuous range of possible values, rather than “analog clock.”

The same UE spelling is used in most countries across the world, apart from the US.

Any English-speaking country that is, or was, a part of the Commonwealth—such as Australia and New Zealand—will use the British English spelling, analogue.

Examples of Analog Used in Sentences

Let’s look at some examples of analog from American publications:

“Building an entire eye or ear was clearly out of the question, but something similar might be done using analog circuits to simulate the workings of parts of the animal's nervous system, such as the retina or cochlea.”—The Economist

“In analog circuits, numbers are represented qualitatively: 0.5 reflecting, say, a voltage that has been halved by increasing the value of a resistor; 0.25 as a quarter the voltage following a further increase in resistance, etc.”—The Economist

“Intelligent document processing, with humans in the loop, allows companies to bridge the business operations gap between the analog and digital worlds.”—McKinsey & Company

“Engineers have reached a theoretical limit for efficiently converting analog data into digital bits in an emerging computer technology.”—ScienceDaily

Examples of Analogue Used in Sentences

Let’s look at some examples of analogue from British and Canadian publications:

“Computer science is the new Latin: it underpins the digital world just as Latin did the analogue world, and games encapsulate all of the ways in which it marries the arts and sciences.”—The Guardian

“To explain the cassette renaissance, it is tempting to turn to some of the same factors driving the current resurgence in vinyl sales: consumers seeking a tactile relationship with their music; a preference for analogue over digital; the sway of nostalgia.”—The Globe and Mail

“The rapid evolution of the metaverse, NFTs, cloud, 5G, internet of things, and the development of digital durables, which are replacing their older analogue counterparts, have increased the quantity of data being generated, stored, and analyzed exponentially, making us netizens.”—PCQuest

Conclusion on Analog or Analogue

So, there it is. If you’re an American or writing for an American audience, analog without a UE is the spelling to opt for.

And if you’re writing for a British audience, stick to the more traditional spelling, analogue.