Affected vs Effected: What's the Difference? 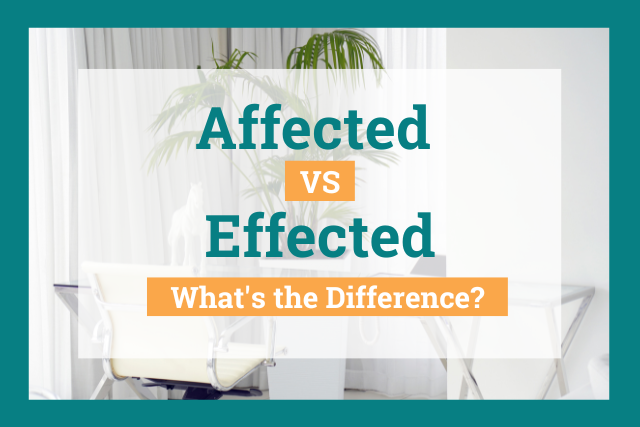 Affect and effect are some of the most commonly confused words out there. So it makes sense that affected and effected are confusing, too.

To put it simply:

Affected means that something was influenced or changed (e.g. the lyrics affected him).

Effected means that something was brought about or facilitated (e.g. she effected the proposed changes).

There are a few more uses, rules, and exceptions. Keep reading to make sure you're using the right word for your context.

I’ve got no doubt that you’ve got what it takes to unravel the not-so-mysterious-mystery of affected and effected.

Ready to prove me right?

What Does Affect Mean?

Affected and effected are the past tense forms of the verbs affect and effect.

But affect and effect aren’t only verbs. They can also be nouns, and this changes their meaning.

Before we look into the past tense uses of the verb forms, we should take a moment to become affect/effect experts.

To use any of these words correctly, we need to understand what each of the forms means and does, and their appropriate contexts.

Affect As a Noun

Affect can be used as a noun. In that form, it refers to the expression or observation of an emotional response. More simply stated, it refers to how a person’s facial expression reveals their feelings.

For example, a person who has just won the lottery will have a positive, joyful affect—with a smile that reaches their eyes.

A person who is depressed or lonely may have a more unhappy or flat affect, with empty eyes and a downturned mouth.

Affect As a Verb

Affect can also be used as a verb that means to influence , to make a difference to, or to move someone emotionally. 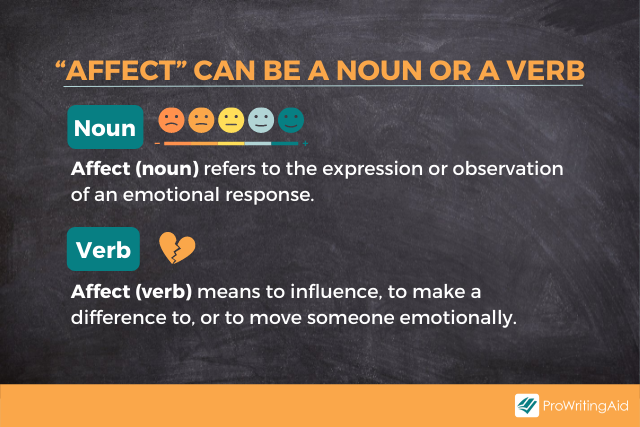 The verb affect carries additional definitions, though they are not used as frequently as the previous definitions.

Affect as a verb can also mean to pretend or put on a phony act, or to wear something.

The verb affect, specifically when it means to influence or to move someone emotionally, is more commonly used than the noun.

What Does Effect Mean?

Like affect, effect can take the form of a noun or a verb.

Effect As a Noun

In its noun form, an effect is a result or an outcome. It’s part of the cause-effect relationship.

Effect As a Verb

As a verb, (to) effect means to bring about or to facilitate change: 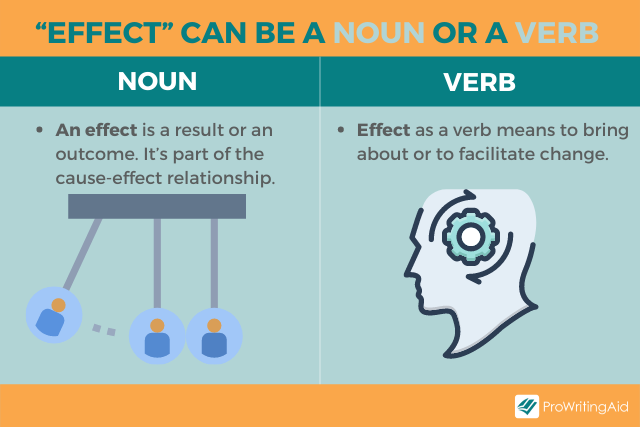 So what does any of this information have to do with affected and effected? Those are the words you’re investigating, right?

Read on and rest assured that your knowledge of affect and effect won’t be wasted; it will serve as a foundation on which to build your understanding of affected and effected.

How Do You Use Affected vs Effected?

I’ll bet you got both answers correct, which will make this next part simple. (Answers: 1. affect = to influence; 2. effect = to bring about)

Affected and Effected are Past Tense Verbs

Adding the -ed ending to affect and effect takes those verbs into the past.

Affected and effected are the past tense forms of those verbs. Affected is much more commonly used than effected in their verb forms and has more varied contexts.

Affected means influenced, prompted a response or reaction, or caused a change. 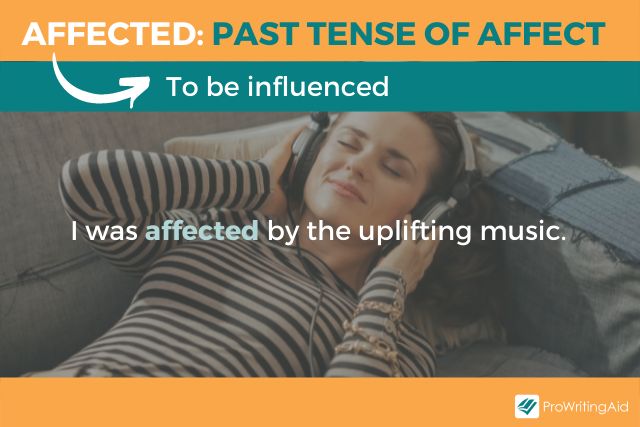 Effected means brought about or facilitated. Contexts for effected often relate to laws, change, or measures:

Even with these definitions in mind, you might still be unsure if you've used the right word. ProWritingAid checks your writing for confused words and helps you fix them with a click.

Check your writing for free with ProWritingAid.

Now you know everything you need to know about affected and effected.

Affected can also be used as an adjective. But we’ll save that discussion for after the verb examples.

More Examples of the Verb Affected

Here are some real-world examples of the verb affected in action.

More Examples of the Verb Effected 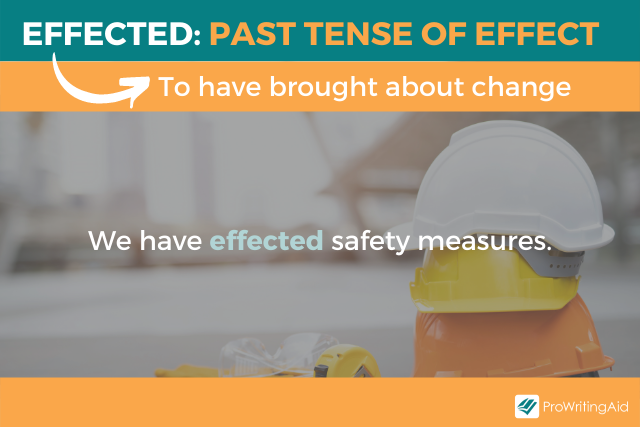 Here are some real-world examples of the verb effected in use.

NOTE and TIP: these sound-alike words even trick the pros sometimes! I found several examples of affected and effected used incorrectly on some reputable and popular websites. 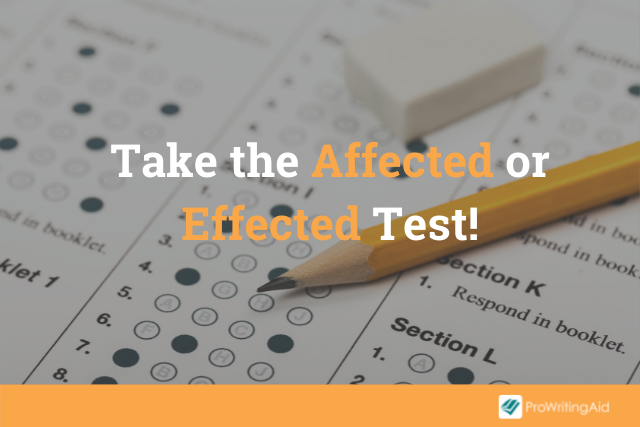 Let’s see if you do even better than the professionals. Should affect or effect fill in the blank?

TRICKY #10: Either affected or effected could fill this blank! The answer depends on intent. You could logically say:

The use of fossil fuels and the destruction of forests has brought about (effected) climate change.

You could also logically say:

The use of fossil fuels and the destruction of forests has influenced or made a difference regarding (affected) climate change.

How to Use Affected as an Adjective

The English language loves to keep its users on their toes. Affected the adjective is just one of many such examples. Sometimes, English just feels mean. But no worries—we’re smarter than English is mean and can take on this additional face of affected!

Adjectives modify (describe or provide more information about) a noun or pronoun.

They answer the questions: What kind? How many? Which / Which ones?

As an adjective, affected answers those questions by taking on one of these possible meanings, depending on the context.

Examples of Affected Used as an Adjective 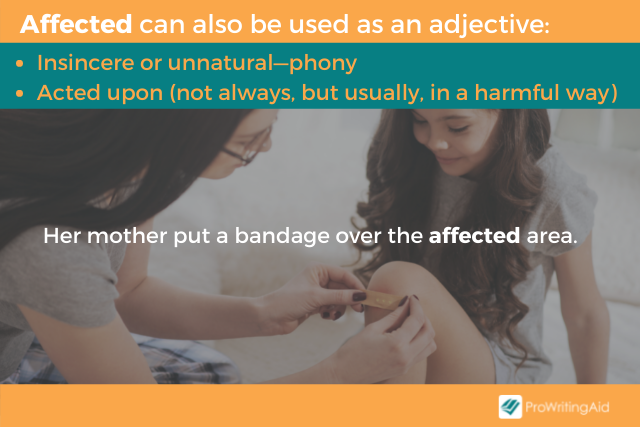 Has this post affected your understanding of affected and effected in a positive way?

I hope the explanations and examples have effected that outcome! When you need to use one of these two words, pay attention to what form you need and the context.