Where: Definition and Meaning

“Where” is a common English word that you’ll need to know if you’re studying the English language.

This article will explain what the word “where” means, where it originates from, and how to use it in a sentence.

What Does Where Mean?

“Where” is a word that we use to point to a specific place or situation.

According to the Merriam-Webster Dictionary, “where” has two definitions. 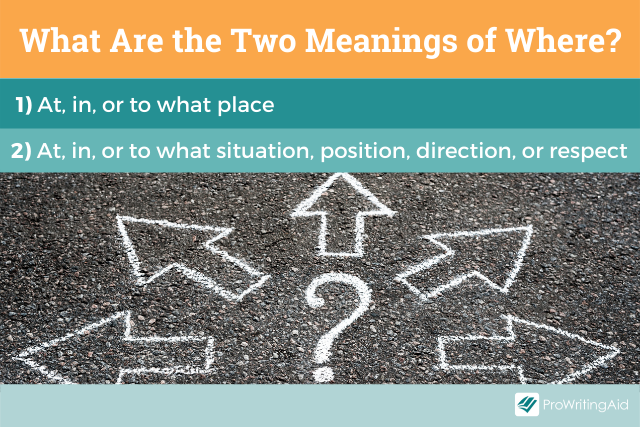 The first dictionary definition is “at, in, or to what place.”

Here are some examples of this first definition:

The second dictionary definition is “at, in, or to what situation, position, direction, circumstances, or respect.”

Here are some examples of this second definition:

What Type of Word Is Where?

“Where” can be an adverb or a conjunction. 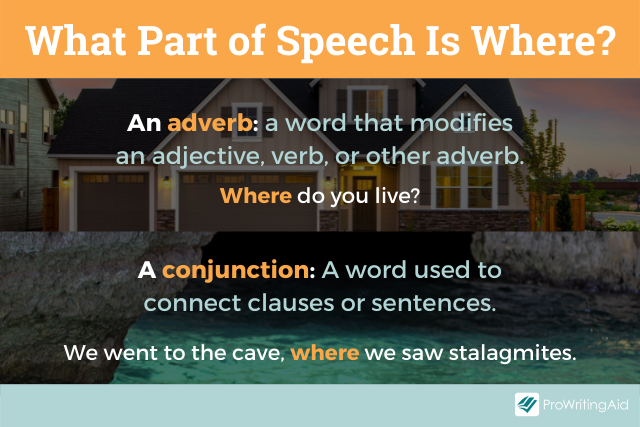 Most commonly, it’s used as an adverb (meaning “at what place” or “in what situation.”)

Sometimes, it’s used as a conjunction (meaning “in the place that” or “in the situation that.”)

Were and where are easy to confuse when writing in English. They look similar, but they are spelled and pronounced differently.

It’s easy to write the wrong thing because the only difference is one letter, but that can significantly change the meaning of what you’re trying to say. ProWritingAid’s Grammar Check will show you every instance where you’ve misused where or were.

Is Where a Verb or Adverb?

“Where” is never a verb (a word used to describe an action). It is often used as an adverb (a word that modifies an adjective, verb, or another adverb).

The Correct Use of Where

There are three different ways to use “where” correctly. You can use it when referring to a physical place, a stage in a process, or a broader situation. Let's look at each of these usages in detail. 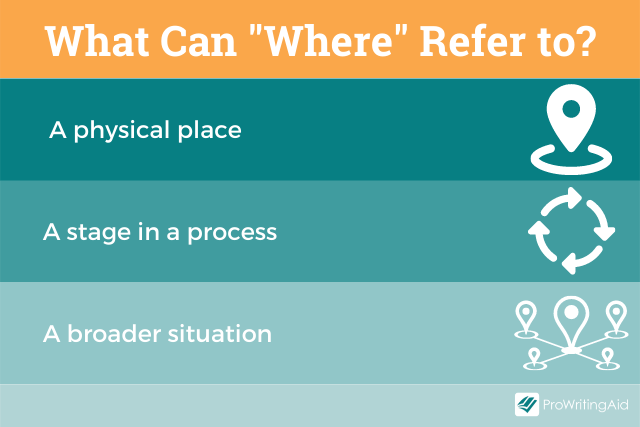 Referring to a Place

“Where” is a useful word for referring to a place.

We can also use “where” to describe a place we’ve already identified. For example, you might say “Beijing, where my sister lives, is a thriving center of commerce” or “That’s the restaurant where my husband and I went on our first date.”

Referring to a Stage in a Process

We also use “where” to refer to a specific stage in a process or activity.

For example, you might say “This is the part of the dance where I always forget the next move,” or “He’s not at the age yet where he needs to decide his future career.”

Referring to a Situation

For example, a common question in a job interview is “Where do you see yourself five years from now?” This question asks about the situation the interviewee expects to be in, not the physical location.

Similarly, you might say “Where was I again?” when you lose your train of thought in a presentation.

More Examples of Where in a Sentence

Here are some examples of the word “where” in English literature. 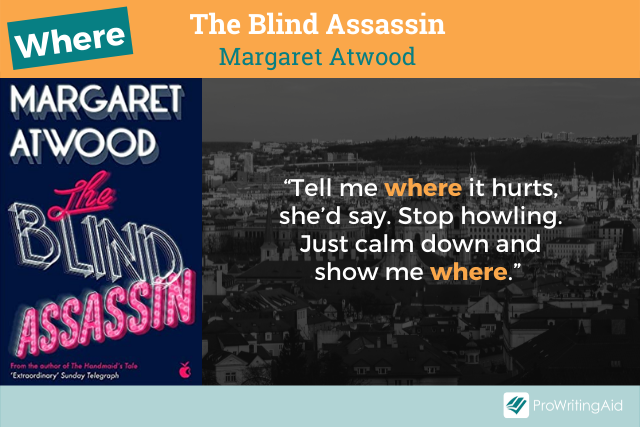 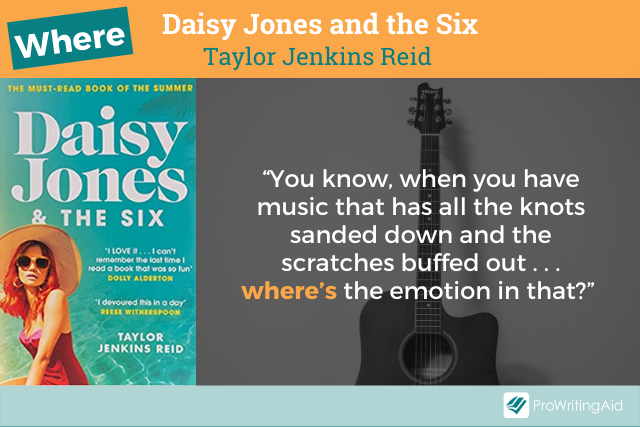 First Known Use of Where: Its Origins

The word “where” stems from the Old English word “hwǣr,” which was akin to the Old High German “hwār.” Both of those words mean the same thing that “where” means now.

Now you know what “where” means and how to use the word in any context. Was this article helpful? Let us know in the comments.