What Is Flash Fiction? Meaning, Characteristics, and Examples 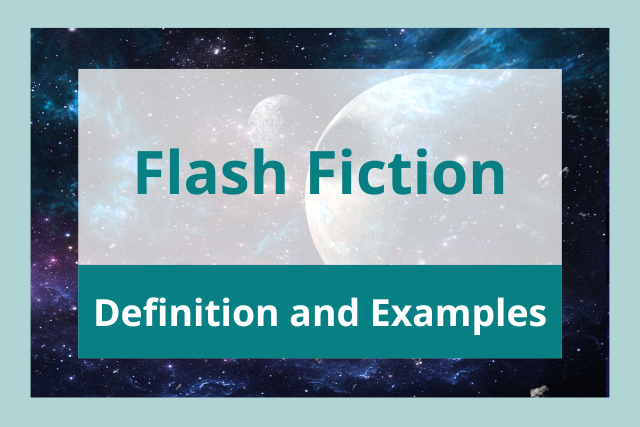 You don’t need to write a novel to tell an amazing story. In the world of flash fiction, you need less than 1,500 words.

Flash fiction, also called microfiction, is a complete story with a small word count. Most flash fiction stories range from five words to 1,000, with the top end of the genre sitting at 1,500.

Think it’s impossible to write an entire story with a plot and characters in so few words? Flash fiction proves it’s not. Let’s take a closer look at the smallest fiction genre.

What Is Flash Fiction?

A flash fiction story—sometimes called a short short or nanofiction—is one that has a complete plot in under 1,500 words. Some flash fiction pieces consist of as few as five or six words.

But no matter how short, flash fiction stories still contain the main elements of a plot. There’s a beginning, a middle, and an end. The story must feel finished by the end in order to be true flash fiction. 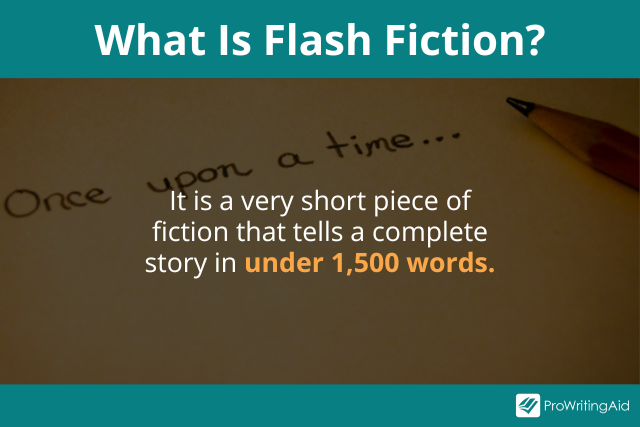 Of course, flash fiction doesn’t allow you to fully flesh out multiple character arcs or settings. It usually focuses on one scene and begins in medias res, or in the middle of things, so there isn’t time for backstory.

How can a writer balance a complete plot without any backstory or side conflicts? The key is that flash fiction stories hint at a larger story. The prose is evocative enough that readers can fill in the gaps on their own, without feeling like something is missing.

One of the most famous examples of microfiction is a six-word story. People often attribute the following story to Ernest Hemingway, although some sources give Arthur C. Clarke credit. The tale is that someone bet Hemingway he couldn’t write an entire story in just six words.

In just six words, we see a plot: something is for sale. “Baby shoes” tells us something about the character. And then we have the story’s resolution: the baby shoes were never worn.

This allows the reader to infer that something tragic happened to a baby. But the tragedy doesn’t lack poignancy despite its minimal word count.

Flash fiction might be a new term, but it’s not a new genre. Fables and parables from antiquity, such as Aesop’s Fables and the Panchatantra, were early forms of microfiction.

Flash fiction continues to be popular today, and many new and experienced writers enter competitions with small word counts.

Flash fiction is a shorter than a short story. But just how short is flash fiction?

Most writers and publishers consider a story to be short if it falls between 1,500 and 7,500 words. Flash fiction stories are even shorter.

Flash fiction consists of a few different subcategories. The terms and word counts differ slightly among writers, but most people agree on the categories below.

Twitterature refers to the character length of a Twitter post, where many writers enjoy posting flash fiction stories. Some writers refer to drabble as microfiction, while others use that term as a synonym for all flash fiction.

How to Write Flash Fiction

To tell a great story in such a low word count, your flash fiction stories need a few key components.

First, your prose should be tight. This means using the active voice instead of the passive voice. It means leaving off unnecessary words, especially adverbs. Focus on using power verbs to create an image in the reader’s mind.

Great flash fiction also needs to begin right in the action, and you need to eliminate as much unnecessary background information as possible. Trust your reader to fill in the meaning within the framework you provide.

Show, don’t tell, is one of those writing rules that applies to everything from a short story to an epic novel to a personal essay. But, it’s even more important in flash fiction stories. Using strong, descriptive verbs and engaging the five senses are how you will make an emotional impact on your readers.

Flash fiction will include a variety of literary devices, such as imagery, symbolism, juxtaposition, and allegory. These devices help pull the reader into the story and create poignancy.

Flash fiction often features a plot twist or surprise ending, as we saw in the “Baby Shoes” example. Or the ending may contrast the first sentence in tone. This helps you achieve movement of your plot within a short word count. 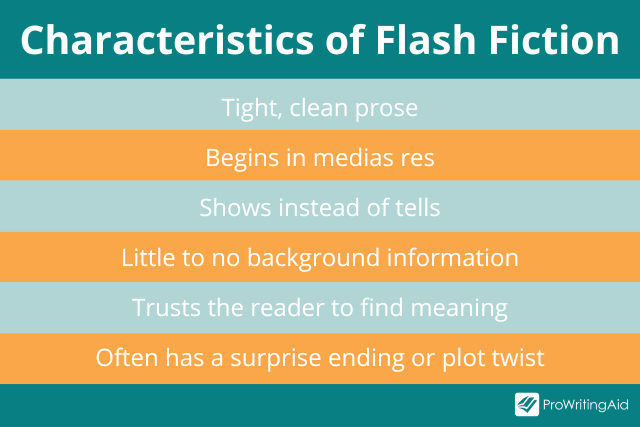 The best flash fiction stories take only a few minutes to read but leave a lasting impression on readers.

"Where Are You?" by Joyce Carol Oates is about a man who is always calling for his wife from somewhere in the house. At first, the story describes the wife’s irritation. But as the story progresses, we see the man is deaf and suffering from some sort of dementia. Eventually, he calls for his wife, but he cannot hear her at all. The tragic story doesn’t end there.

Oates writes the entire story in one paragraph, and she artfully uses short sentences, repetition, and em dashes to mimic the increasingly frantic feelings the husband has as he wonders where his wife is.

Each sentence adds a new layer of information. We don’t realize he’s going deaf until nearly halfway through. We’re nearly done with the story when we see signs of memory loss. Just when you think you know the sad way the story will end, there’s a huge twist ending.

Sticks by George Saunders starts out as a story about a metal pole dressed in a Santa suit. But it quickly turns into the story of a father losing his sanity, as told by his son.

In the first paragraph, the narrator shows how his father was unhappy and neurotic, except when decorating the pole. Then we see his descent into psychosis, all through the pole’s decorations.

The pole symbolizes the father’s anchor to both his sanity and his family. Saunders also weaves irony through each image. The flash fiction story ends abruptly, with a heavy dose of cynicism and sadness.

Why You Should Write Flash Fiction

Flash fiction might be shorter, but it’s not easier than any other type of writing. In fact, many long-form authors find it more challenging to write!

But writing flash fiction stories is a great way to sharpen your writing skills. Forcing yourself to stay under 1,500 words will help you clean up your prose.

It will improve your action writing skills, as you must keep your story moving. You’re forced to cut backstory, so you can practice using imagery, symbolism, word choice, and more to achieve your story’s meaning. 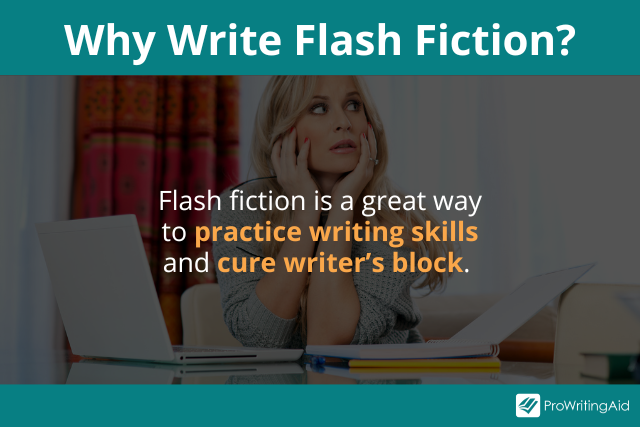 Flash fiction is also a fun way to practice writing plot twists. You can improve your sensory detail, and you can play with literary devices you’ve never used before.

You can use ProWritingAid to edit your flash fiction and hone your skills, too. ProWritingAid can point out things like passive voice, unnecessary words, excessive adverb usage, and more. 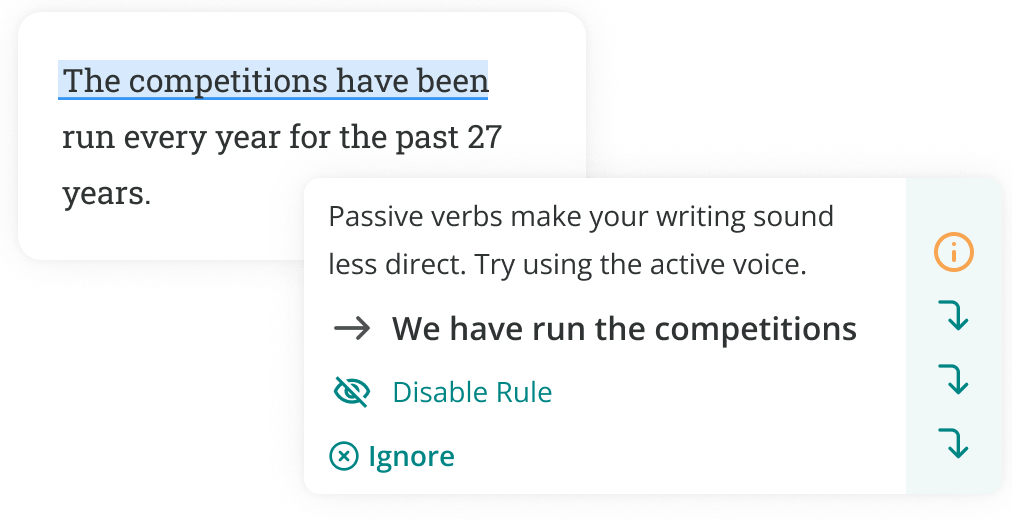 Don’t expect to achieve a masterpiece in six words on your first try. Instead, you can use flash fiction to better your craft and cure writer’s block. If you’re finding yourself uninspired or stuck on a project, write some flash fiction to get those creative juices flowing again.