What Does Ms. Stand For? 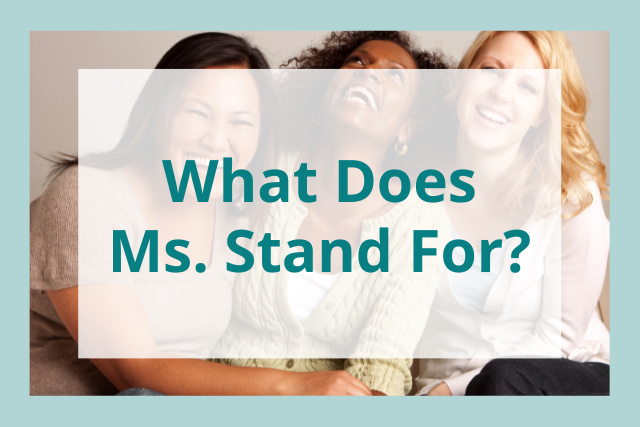 Ms. is a courtesy title used for people who identify as women, regardless of marital status. Let’s take a closer look at what Ms. means and how to use it correctly.

What Does the Abbreviation Ms. Stand For?

Ms. isn’t actually an abbreviation of anything. It’s a standalone title to address any woman regardless of her marital status. 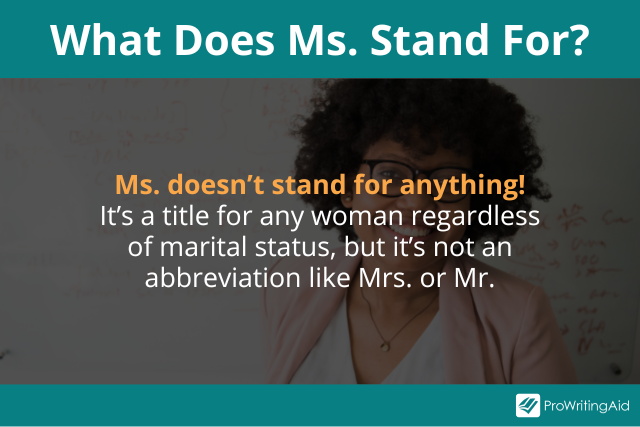 What Does Ms. Stand For in a Name?

The title Ms. actually dates to about 1901. The Springfield Sunday Republican published an article about the need for a title that didn’t immediately classify a woman as married or unmarried.

Traditionally, “Miss” was the title for unmarried women, and “Mrs.” is what we used for married women.

However, Ms. didn’t catch on until the 1970s with the second-wave feminist movement. It became more important to have a way to identify yourself without mentioning whether you’re married.

Miss often sounds like a young woman, although there are unmarried women of all ages. There was also the factor of discrimination in employment, housing, and banking, all based upon a woman’s marriage status.

Ms. was the solution for eliminating this. It caught on with feminist Gloria Steinem’s Ms. Magazine, which she founded in 1971. By the 1980s, Ms. was a generally accepted title.

Ms. doesn’t actually stand for anything. It’s simply a title that any woman can choose to use.

How to Use the Title Ms.

You should use Ms. for an individual that identifies as a woman whenever you do not know what title she prefers.

It doesn’t matter if you know her marital status. Many women, married and unmarried, do not use Miss or Mrs. in their names. If possible, ask which title she prefers. Otherwise, you should use Ms.

Is There a Period After Ms.?

That depends on whether you’re using American English or British English.

The rule in most American writing style guides is to always place a period after titles like Ms., Mrs., Mr., Dr., etc.

If you don’t have a style guide, it’s up to you. It’s not incorrect to omit the period, but the generally accepted usage has a period.

Use the period even if there’s another punctuation mark directly after the title, like a comma or colon. If Ms. is at the end of a sentence, which would be unusual since it usually precedes a name, do not add an extra period. 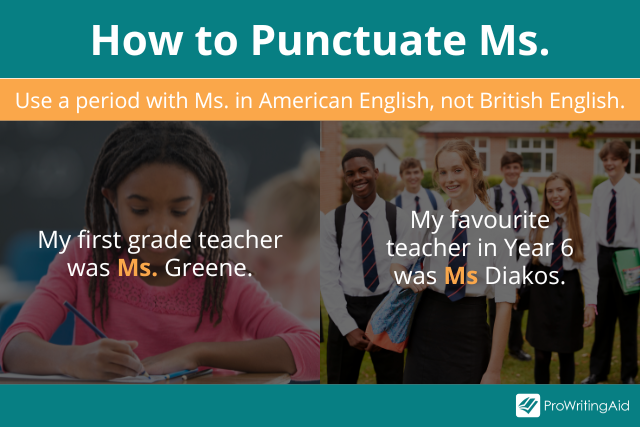 However, in British English, they do not use a period in name titles.

Examples of Ms. Used in Sentences

Let’s take a look at some examples of how to use Ms. in a sentence. Remember, for American English, we use a period in the title, even if Ms. is in the middle of a sentence or if it directly precedes another punctuation mark.

Conclusion: What Does Ms. Stand For?

The answer to the question “What does Ms. stand for?” is “nothing!” But it is a title that can be used for any woman.

It’s not necessary to know a woman’s marital status for this title. Some women prefer Ms. because they don’t want to be identified by whether or not they’re married.

You can use ProWritingAid to check your punctuation usage and consistency. By selecting whether you’re using American or British English in your settings, you will get appropriate punctuation suggestions for honorifics. Try it for free today!