Ms vs Mrs: What Is the Difference? 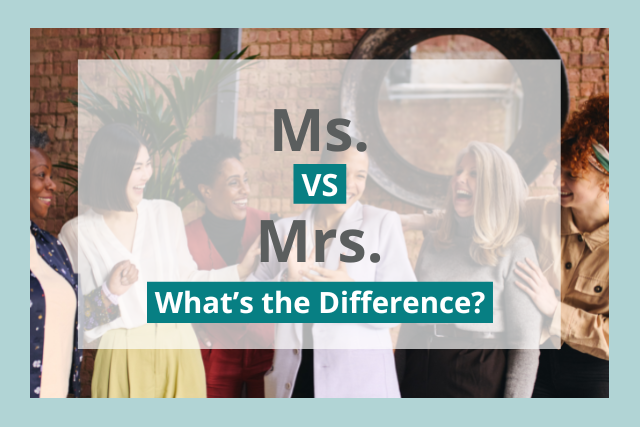 Mixing up Ms. vs Mrs. is a common mistake, since they’re both titles you can use for women, and the only difference between them is an extra R.

It’s important to know when to use each one. Mixing them up isn’t just a grammatical error, it’s also a breach of social etiquette that might offend the person you’re addressing.

So what is the difference between these two titles?

Mrs. is a title specifically for married women, while Ms. can be used regardless of a woman’s marital status. You should always ask women which title they prefer and respect their preference.

Read on to learn more about how to use Ms. vs Mrs. correctly and to see examples of these titles in a sentence.

What’s the Difference Between Mrs and Ms?

The words Mrs. and Ms. are both titles you can use for women.

The main difference between the two titles is that Mrs. specifically implies that a woman is married, while Ms. says nothing about her marital status. If you don’t know which title a woman prefers, it’s always better to default to Ms. 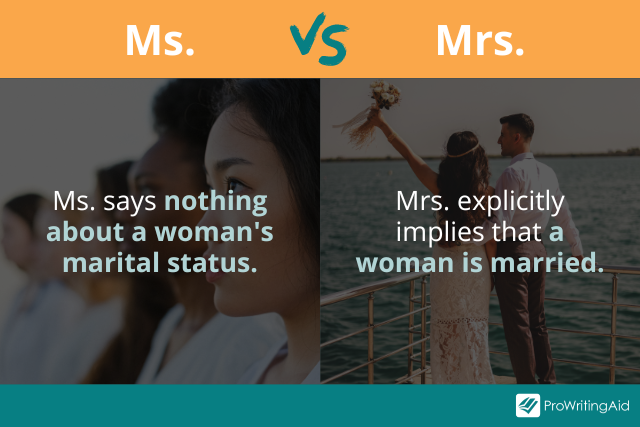 Mrs. was originally short for “Mistress.” In modern English, the title is pronounced “Missus.” For many married women, Mrs. is their preferred title.

Ms. takes the emphasis off of the woman’s marital status, the same way Mr. does for men. Ms. is pronounced “Mizz,” rhyming with “whiz.”

The title Ms. was first coined in the 1950s as a female equivalent to Mr., when women wanted to be known for something outside of their marital status, just like men.

The title became more common in the 1970s, and it’s now the default title you should use when referring to an adult woman, unless you know they prefer a different title.

When to Use Ms

You should use Ms. before a woman’s last name or full name. For example, if you’re writing to a woman named Abbey Brown, you might write “Ms. Brown” or “Ms. Abbey Brown.”

As a general rule, it’s almost always safe to use Ms. instead of Mrs., especially if you don’t know whether you're talking to a married or unmarried woman.

When you’re writing in a professional context, such as when you’re speaking to a co-worker, contractor, or client, it’s often best to use Ms., because a woman’s marital status is likely irrelevant to her career.

The only exception is when the woman has a different preferred title, such as Dr.

You can also use the gender neutral honorific Mx. if it seems more appropriate. 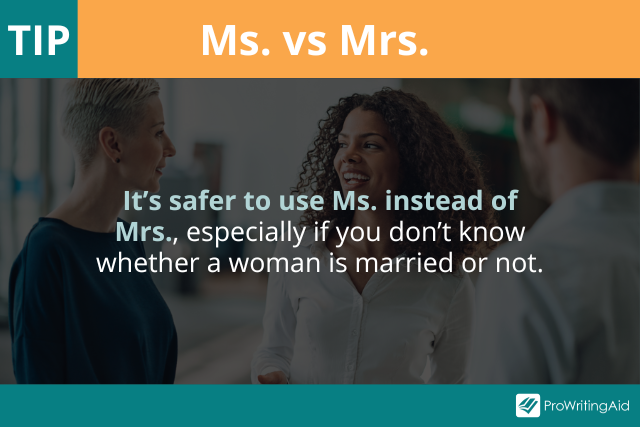 What Is an Unmarried Woman’s Title?

Ms. is an acceptable title for an unmarried woman, because it has nothing to do with marital status.

In general, Ms. is always a safe and respectful choice, even when you're talking to young women and girls.

Examples of Ms in a Sentence

Let’s look at some examples of how to use Ms. in a sentence.

“When Ms. Adams took attendance and called out the name of an absent classmate, Noah’s hand shot up.”—Michelle Hodkin, The Unbecoming of Mara Dyer

“Ah, Ms. Ferrars. I don't know what you hope to accomplish by sitting in the corner.”—Tahereh Mafi, Unravel Me

“Ms. Rachel is like the sun. See her sparkling there with the wind in her hair and fire in her eyes? You can’t catch the sun.”—Kim Harrison, For a Few Demons More

“The officer was already tired of the haughtiness of Ms. Headstrom.”—Kathleen Lopez, Thirteen for Dinner

“Tough guys or not, I was one of them. I wasn’t Ms. Townsend anymore. I was Sadie, Rock Chick. How great was that?”—Kristen Ashley, Rock Chick Regret

“We both ended up on the floor as screams—Ralf's in particular—filled the classroom and Ms. Meissner sprinted for the fire extinguisher.”—Richelle Mead, Vampire Academy

When to Use Mrs

You can use Mrs. as a formal title for addressing married women.

You should use Mrs. before a woman’s last name or full name. For example, if you’re writing to a married woman named Miranda Smith, you might write “Mrs. Smith” or “Mrs. Miranda Smith.”

You might often see Mrs. used in the phrase “Mr. and Mrs.” to describe a married couple. For example, you might refer to Miranda Smith and her husband as “Mr. and Mrs. Smith.”

Mrs. usually refers to a married woman, although there are a few exceptions. Sometimes, divorced women prefer the title Mrs., even though they’re no longer married. The same may be true for widowed women.

You should always ask to make sure you’re using the woman’s preferred title. 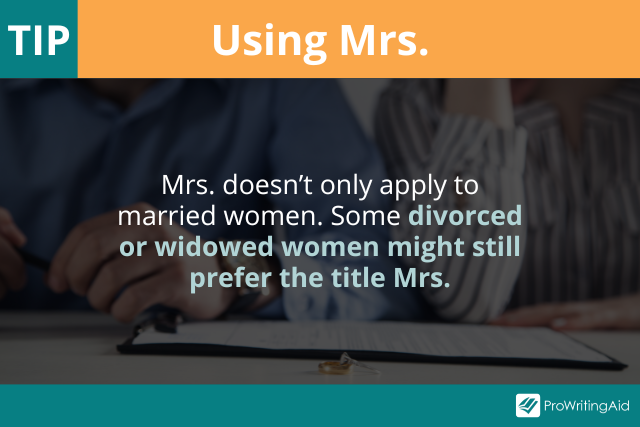 Examples of Mrs in a Sentence

Let’s look at some examples of how to use Mrs. in a sentence.

“Mr. and Mrs. Dursley, of number four Privet Drive, were proud to say that they were perfectly normal, thank you very much.”—J.K. Rowling, Harry Potter and the Sorcerer’s Stone

“Either you go to America with Mrs. Van Hopper or you come home to Manderley with me.”—Daphne du Maurier, Rebecca

“Forgive me for startling you with the impetuosity of my sentiments, my dear Scarlett—I mean, my dear Mrs. Kennedy.”—Margaret Mitchell, Gone with the Wind

“And I knew that in spite of all the roses and kisses and restaurant dinners a man showered on a woman before he married her, what he secretly wanted when the wedding service ended was for her to flatten out underneath his feet like Mrs. Willard's kitchen mat.”—Sylvia Plath, The Bell Jar

“One day when she was two years old she was playing in a garden, and she plucked another flower and ran with it to her mother. I suppose she must have looked rather delightful, for Mrs. Darling put her hand to her heart and cried, ‘Oh, why can’t you remain like this for ever!’”—J.M. Barrie, Peter Pan

“Mrs. Spence picks up a roll of toilet paper from the counter and scrunches her nose.”—Kasie West, The Difference Between Us

“No one really starts anything new, Mrs. Nemur. Everyone builds on other men's failures.”—Daniel Keyes, Flowers for Algernon

How to Remember the Difference Between Mrs vs Ms

If you often mix up Mrs. and Ms., one useful mnemonic is to remember that married includes the letter R.

Therefore, Mrs. with an R is the title that you should use for married women, while Ms. without an R is acceptable for both married and unmarried women. 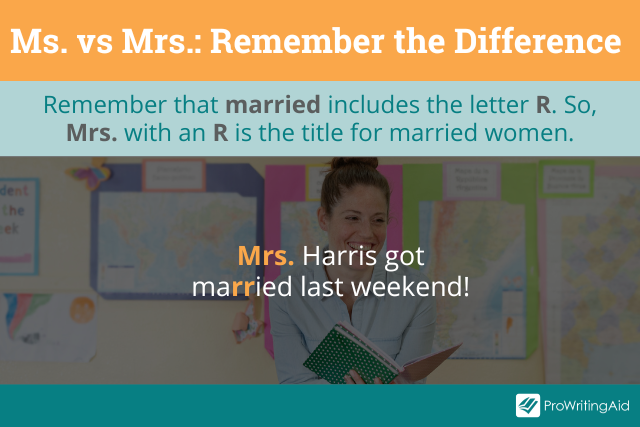 Hopefully you never get Ms. and Mrs. mixed up again! When in doubt, remember that married includes an R, and never forget to ask for a woman’s personal preference.