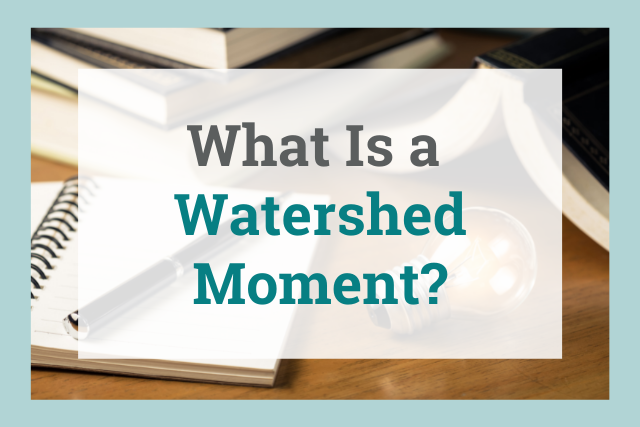 Like most idioms, “watershed moment” doesn’t mean what it sounds like. It has nothing to do with water or sheds.

So what exactly is a watershed moment, and where does this term come from?

This article will explain what a watershed moment is and how you can use it in your own writing.

Definition: What Does Watershed Moment Mean?

The term “watershed moment” is an idiom that refers to an important event that changes the direction of history.

There are many famous watershed moments throughout history. Some of these events are important to a single country or population, while others affect the entire world. 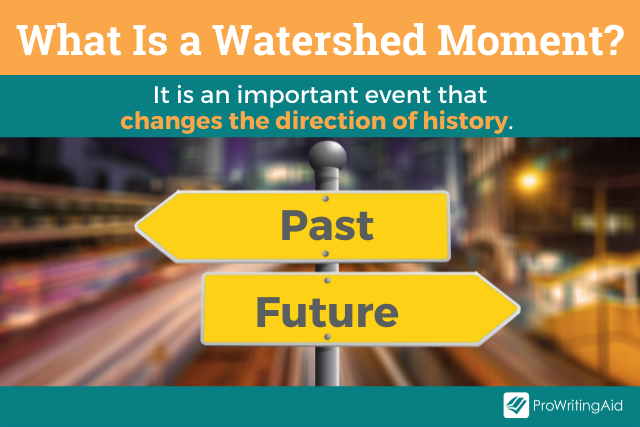 One famous example of a watershed moment is the invention of the printing press.

In 1435, Johannes Gutenberg made it possible to print books in a much cheaper and more efficient way.

This discovery led literacy to rise throughout first Europe, then the world, and gave us the literature we have today.

Another example is the assassination of Archduke Franz Ferdinand in 1914.

This event caused Austria-Hungary to declare war on Serbia, which obliged their other allies in Europe to mobilize, and ultimately led to WWI.

Gutenberg’s invention and Archduke Ferdinand’s assassination are both considered watershed moments around the world.

They were important events that made a strong impact on the trajectory of history. 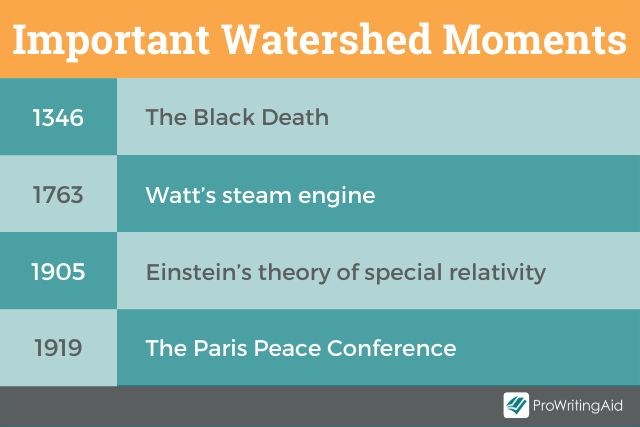 The term “watershed moment” can also be used on a more intimate level to refer to major turning points within a single person’s life.

For example, your personal watershed moment might be when you move to a new country or when you decide to change careers.

Where Does the Term Watershed Moment Come From?

The word “watershed” is a geographical term that refers to an area of land that divides the flow of separate rivers.

Think of it as a literal dividing point: the water is going one way at first, until the watershed moment, when it gets rerouted toward a different trajectory. 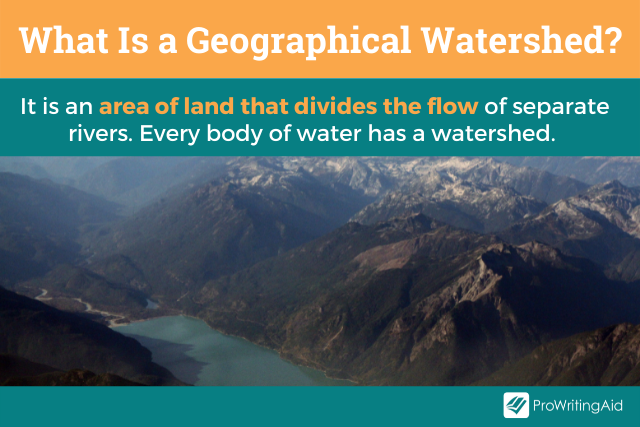 The term gained its figurative meaning as a historical turning point because it changes the shape of history in the same way.

The figurative meaning of the word “watershed” originated in the mid-1800s, and the phrase “watershed moment” became popular around 1900. 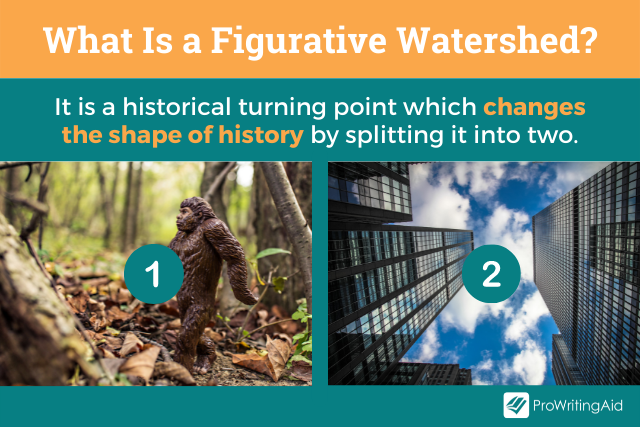 How Do Watershed Moments Impact Literature?

If you’re a fiction writer, you might want to consider paying attention to watershed events as a source of inspiration.

Watershed moments are fascinating because they hold more cultural significance than other events do. They can spark story ideas and resonate with readers.

These are events that change everything, including the shape of history. It’s fun to imagine what would happen if these events had happened differently.

Writing about these moments can give your story a lot of cultural resonance, because watershed moments are so well-remembered.

Here are some examples of historical fiction novels that follow watershed moments:

Alternate history is a genre of fiction that imagines what history would be like if a watershed moment had gone a different way.

Here are some examples of alternative history novels that re-envision watershed moments: 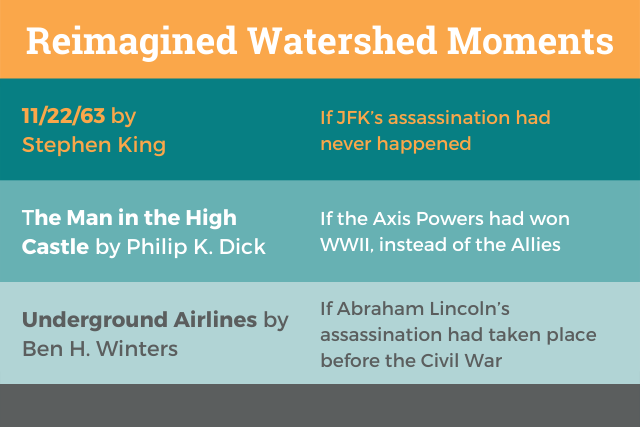 It’s often hard to know which events will be a watershed moment until many years after the event is over.

You need a bird’s-eye-view to be able to track the major turning points of history, just like you don’t know if you’re at a river bend when you’re standing inside the river itself.

Often, it’s impossible to predict whether the ultimate effect of an important event will be good or bad. There will be positive and negative effects of everything.

Fiction is a powerful way to show these themes and connect readers with history.

The phrase "watershed moment" can appear across fiction and non-fiction writing. Whether you're fictionalizing or analyzing an historical event, do your ideas justice with great editing.

ProWritingAid allows you to choose your document type from over 40 options so you get suggestions that are fit for your purpose.

Once you select your document type, the software will score your writing against averages for that type so you always know if you're on track. 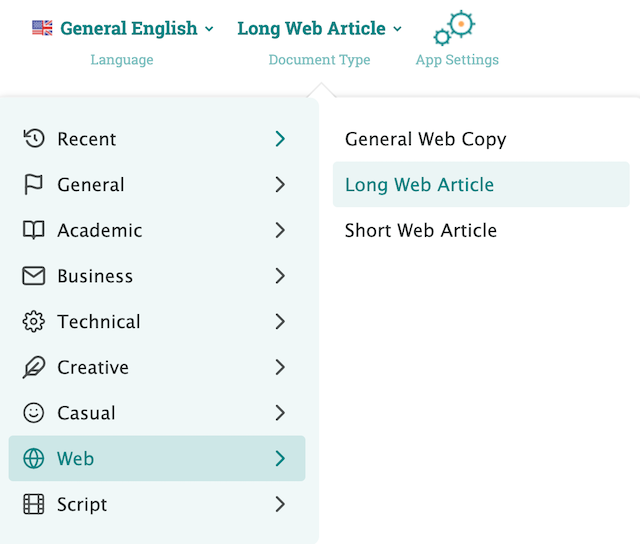 Get suggestions for your document type with a free ProWritingAid account.

What Are Some Examples of the Phrase Watershed Moment in Writing?

Here are some examples of instances in which “watershed moment” has been used in writing, in both fiction and nonfiction:

She looked skinny to me, even gaunt, but I probably thought that because of her hair. Nothing left. The color seemed darker, what had been traces of a reddish hue were now gone, and only her roots were left, the fine nubs rich and brown. I beat down the idea that her cutting it was a statement intended for me. Women, I know, sometimes have themselves shorn at those watershed moments of their lives, like discarding the memory of a man.

In this passage, Chang-Rae Lee uses the term “watershed moment” to refer to a personally important moment, rather than a historically important one.

Here, the narrator of the story uses the term to remark that women often change their haircuts after breaking up with their boyfriends, which he regards as a major turning point in their lives. 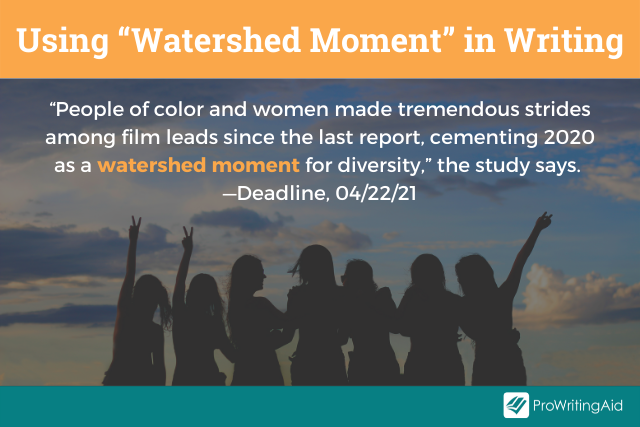 In the Time of the Butterflies by Julia Alvarez

And so it was that the weekend that was to have been a watershed in Dedé’s life turned into a trip down memory lane in a rented boat. In and out of the famous lagoons they had visited as a young bride and groom Jaimito rowed, stopping to point with his oar to the swamp of mangroves where the Tainos had fished and later hidden from the Spanish.

In this passage, Alverez uses the term “watershed” to refer to a moment that Dede thought would be important.

Dede thought this weekend would change her marriage for good, but instead, she and her husband simply spend the weekend reminiscing on their early memories, without moving toward the future.

As a result, the weekend turns out not to be a watershed after all.

Mr. Sanchez acknowledged the political influence of an unprecedented strike on International Women’s Day on March 8, when millions of Spanish women abandoned their workplaces and homes and took to the streets, describing it as a watershed moment for social progress.

This article in The Telegraph describes the way Mr. Sanchez is being applauded for advancing equality with his appointments of female ministers.

He uses the term “watershed moment” to insinuate that the International Women’s Day strike was an important event for the history of gender equality.

Cast diversity in films “skyrocketed” last year, according to the latest inclusion report from UCLA.

“People of color and women made tremendous strides among film leads since the last report, cementing 2020 as a watershed moment for diversity,” the study says. “For the first time, both groups nearly reached proportionate representation among film leads.”

Finally, this Deadline article describes the way diversity in Hollywood films is becoming a norm, not an outlier.

In fiction, watershed moments can provide sources of inspiration for stories.

Can you think of any books inspired by watershed moments? Share them in the comments.