Villian vs Villan vs Villain: Which Is the Correct Spelling?

Villain is a tricky word to spell—it stumps many English speakers every day. Villian and villan are two common misspellings.

So, how do you spell villain correctly?

You should always spell it with A-I-N at the end.

This article will explain how to spell villain and give you our best tips for remembering the correct spelling.

How to Spell Villian Correctly

The correct way to spell villain is with an A-I-N.

Many people mess up the spelling of villain. Common misspellings include villian with the I before the A (like in the above heading) and villan without an I. Make sure to avoid these mistakes, so you don’t confuse your readers. 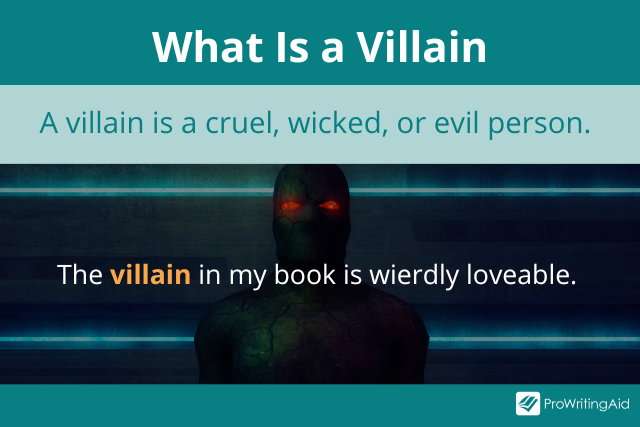 Quick Definition and Meaning of Villain

A villain is a cruel, wicked, or evil person. We use the word villain most commonly when talking about the principal bad character in a fictional book or movie.

Keep in mind that not all antagonists are villains—an antagonist is anyone who opposes the main character, even if they mean well, while a villain is a character who commits evil deliberately.

You can also call someone a villain in real life if they’re being cruel or malicious. Common synonyms for villain include scoundrel, criminal, and wrongdoer.

Examples of Villain Used in Sentences

The best way to learn how to spell a word is by reading plenty of examples. Here are some examples of the word villain used in popular English books.

“But these words people threw around—humans, monsters, heroes, villains—to Victor it was all just a matter of semantics. Someone could call themselves a hero and still walk around killing dozens. Someone else could be labeled a villain for trying to stop them.”—Victoria Schwab, Vicious

“If we were in a film, the villain would turn out to be the least-expected person. But as we aren’t in a film, I’d go for the character who tried to strangle you.”—Kerstin Gier, Ruby Red

“The villain is the hero of her own story.”—Michelle Hodkin, The Retribution of Mara Dyer

“He looked like an evil male model, showing off what the fashionable college-age villain was wearing to Harvard this year.”—Rick Riordan, The Sea of Monsters

“He thinks he'll be remembered as the villain in the story. But I forgot to tell him that the villain is usually the person who locks up the maiden and throws away the key. He was the one who let me out.”—Sarah J. Maas, A Court of Mist and Fury

“She had always found villains more exciting than heroes. They had ambition, passion. They made the stories happen.”—Soman Chainani, The School for Good and Evil

“The train is roaring toward you and the villain is twirling his moustache and you're fussing that he's tied you to the tracks with the wrong kind of rope.”—Robin McKinley, Sunshine

“Every good story needs a villain. But the best villains are the ones you secretly like.”—Stephanie Garber, Legendary

“One may smile, and smile, and be a villain.”—William Shakespeare, Hamlet

How to Remember the Correct Spelling of Villian

One way to remember the correct spelling of villain is to remember that it’s common for the villain to get slain by the hero at the end of the story. That way, you can remember that the word villain ends with the letters L-A-I-N, just like the word slain. 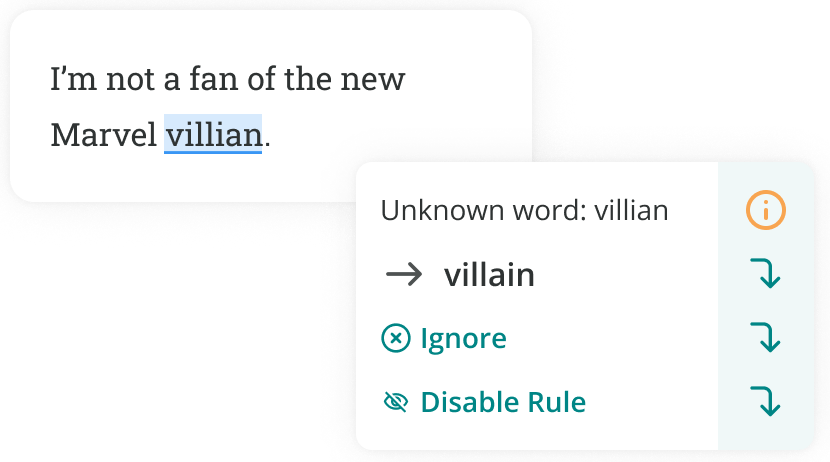