Blog The Writing Process The 4 Types of Irony

The 4 Types of Irony 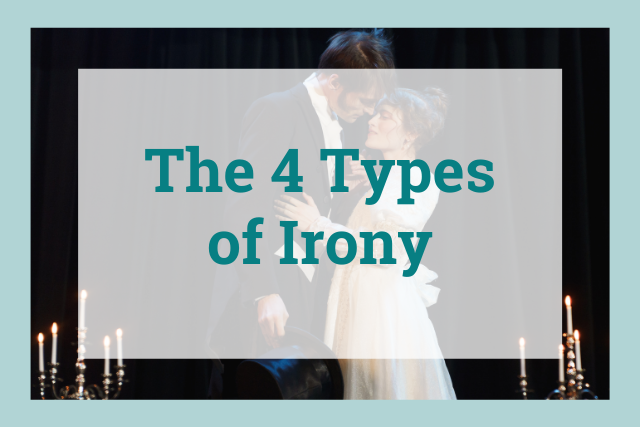 Irony occurs when something that is said or the expected outcome of a situation is different from what actually happens.

It’s a rhetorical and literary device that comes in several formats. 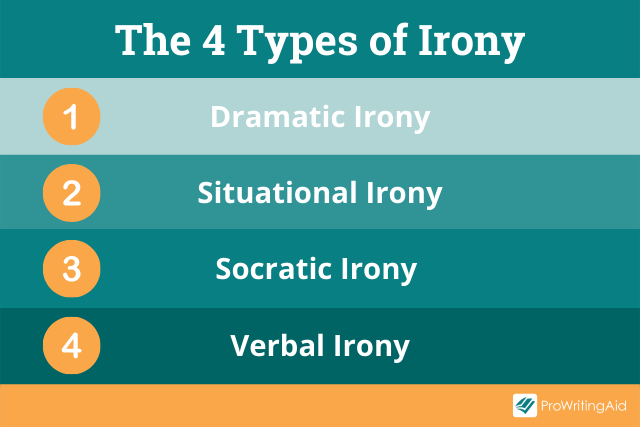 Irony can be a complicated topic, and it’s not the easiest literary technique to identify. This is because not all types of irony look the same.

Each of the different types of irony serve distinct purposes, but they are all rooted in the idea that the expected outcome differs from the actual outcome.

These outcomes might be incongruous events in a story, or words that don’t align with their intended meaning.

Irony comes from the ancient Greeks. A character named Eiron in a Greek comedy downplayed his abilities in order to defeat his enemies.

It’s from his name that we got the Greek word “eironeia,“ which means “feigned ignorance.“ Greek tragedy and comedy frequently used irony for storytelling.

Why use different types of irony? What purpose does irony serve? Irony is a way to emphasize ideas. Irony can build tension, add humor, or lead to an unexpected twist.

There are three types of irony that show up regularly in literature: situational irony, verbal irony, and dramatic irony.

The fourth and oldest type of irony is Socratic irony, which involves the feigned ignorance that was commonly portrayed in ancient Greek theater.

Let’s take a look at each of these types in more detail, along with several examples. 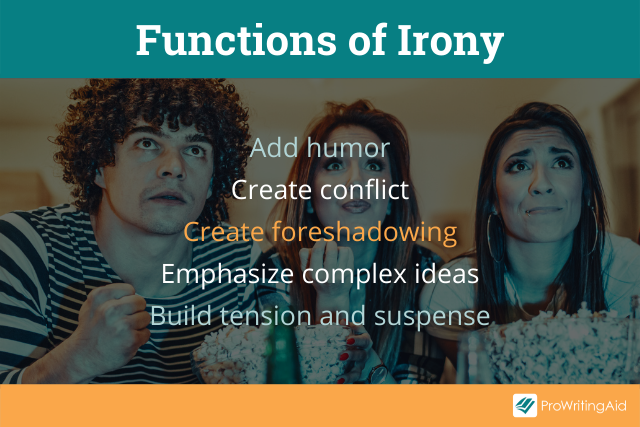 Situational irony occurs when the outcome of a situation differs greatly from what one would expect to happen.

Maybe a marriage counselor files for divorce or a fire station burns down. These are all examples of situational irony.

In literature, situational irony can build tension or lead to a great plot twist. It’s a way to keep readers guessing what comes next. What happens when the murderer gets murdered halfway through the story? 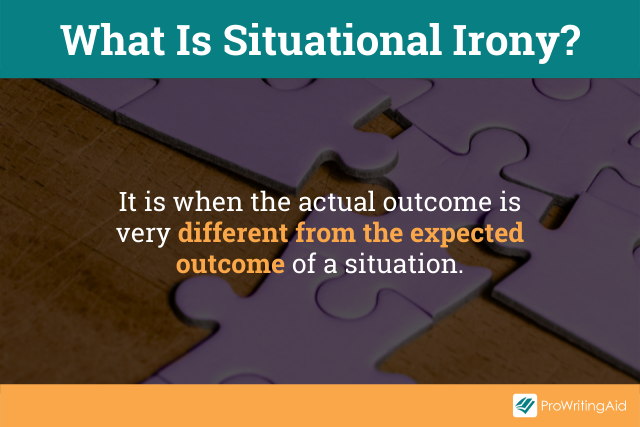 Cosmic irony occurs when a higher power, like a god, magic, or fate, intervenes and creates ironic situations. A character might appeal to a god, who ends up making the situation more challenging.

Poetic irony is also called poetic justice. This is a very fitting outcome, usually for a bad character. This is the trope of “the punishment fitting the crime.“ For example, a character who seeks immortality at all costs dies young.

Structural irony is when a character is unaware of the situation they are in. This might be the “fish out of water“ trope or a character’s ignorance. Maybe they don’t know they are the Chosen One and that their actions have far-reaching effects.

Historical irony occurs when the consequences of a character’s intended outcome cause the opposite of what they tried to do. It can also mean a character’s morals change over time in a way that affects their original goals.

This might look like a time traveler killing Hitler only to cause Nazi Germany to win the war under a new leader. Or maybe a character who sets out to take down power-hungry villains becomes obsessed with power themselves. 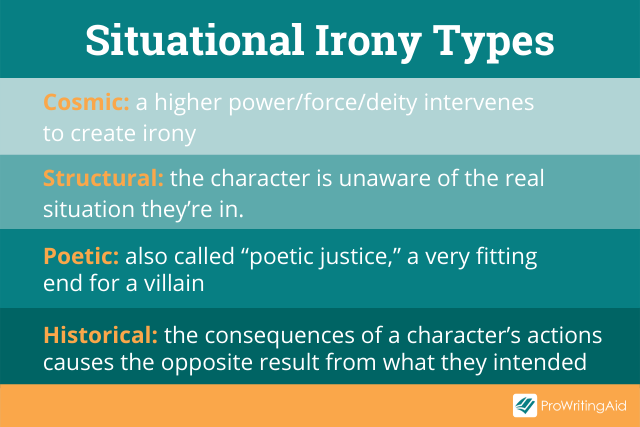 One example of situational irony occurs in the Harry Potter series. Voldemort spends his life trying to become immortal.

But, because he split his soul, Voldemort dies at age 71, much younger than wizards who die of natural causes. That's 10 years younger than the average life expectancy of real people in the United Kingdom!

This is both poetic irony and historical irony. Voldemort gets a fitting demise, and his actions had the opposite effect of what he intended.

Another example of situational irony, specifically structural irony, is in the movie Shutter Island.

The movie follows a U.S. Marshal named Teddy Daniels, who is sent to investigate mysterious disappearances at a hospital for the criminally insane.

The movie is a psychological horror which ends with a major plot twist. Teddy is actually a patient at the hospital, and the doctors tried to cure him by allowing him to act out his conspiracy theory. 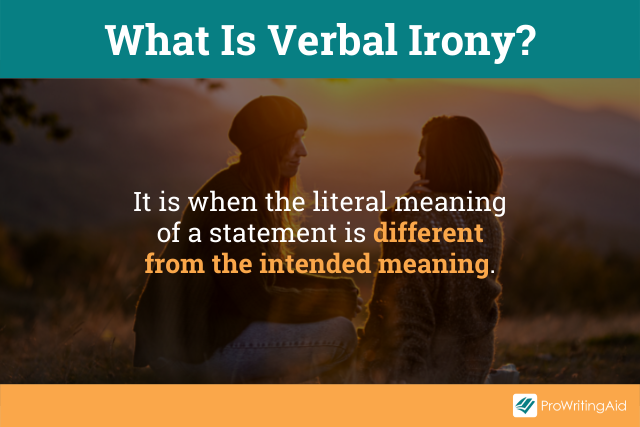 Verbal irony occurs when someone says one thing but means another. As a literary device, this happens anytime the literal meaning of a statement differs from the author’s or character’s intended meaning.

Verbal irony can be a way to include humor or levity in a story, but it’s not always funny. It can also be used to foreshadow events or create tension between characters.

There are three major types of verbal irony: sarcasm, understatement, and overstatement.

Sarcasm occurs when someone says the opposite of what is actually true with the intent of being snide or even hurtful. Telling your sister she’s your favorite sibling right after she ruined your favorite dress is an example of sarcasm.

Understatements are another type of verbal irony. Litotes are a specific type of understatement meant to express an affirmative by using a negative statement. For example, saying, “she’s not the nicest person“ to describe a character who is very mean is a litotes.

Overstatements are also ironic. Hyperbole occurs when there is a great over exaggeration, such as, “I’m so hungry I could eat an entire hippo.“ 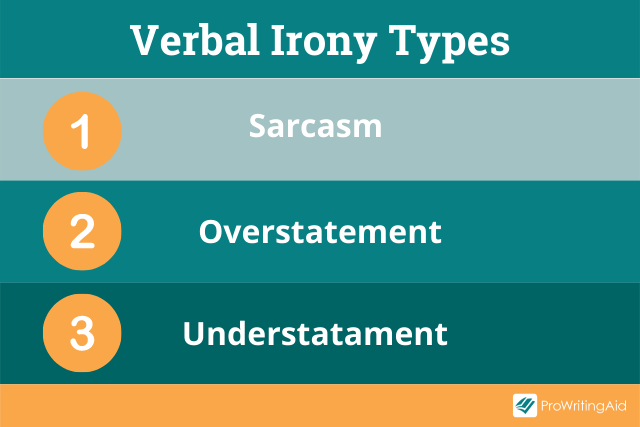 Socratic irony can also be considered a type of verbal irony, but it’s often used for a slightly different purpose in literature, so we’ve given it its own section below.

Let’s look at a few examples of verbal irony.

Shakespeare loved using verbal irony in his plays, and Julius Caesar is no exception. Just after Brutus betrayed and murdered his friend Caesar, Marc Antony gives a speech and calls Brutus “an honorable man.“

Of course, hot chocolate isn’t cold or bitter, and you aren’t supposed to add vinegar or refrigerate it. 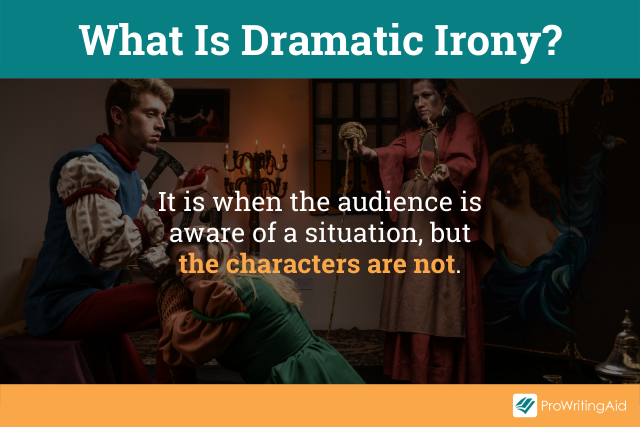 Dramatic irony is the third major type of irony in literature. Dramatic irony occurs when the audience or reader knows what is happening, but the characters do not.

Of all the types of irony, dramatic irony is the best at building tension. The audience waits for the proverbial shoe to drop. They watch characters making bad choices and want to tell them to stop.

Dramatic irony also allows readers to pick up on more examples of verbal irony and foreshadowing. It illuminates difficult choices that characters must make and intensifies the emotional aspect of a story.

When the audience is aware that a tragic situation will occur, but the characters are trying to avoid it, it’s called tragic irony.

But not all dramatic irony results in disaster: romance often uses it when the audience knows two characters will end up together before the characters do.

One of the most famous examples of dramatic irony, more specifically tragic irony, is from Shakespeare’s Romeo and Juliet. The audience knows that Juliet has taken a potion to pretend to be dead. She is waiting for her happily ever after with Romeo. But Romeo thinks she is actually dead and kills himself. Juliet tragically wakes to find her true love dead, so she ends her own life, too.

The movie The Truman Show is another great example of dramatic irony. The main character is actually the star of a reality show and is being watched all the time. But he does not know that he's on TV and being filmed. The suspense is built as the audience waits for him to find out the truth. 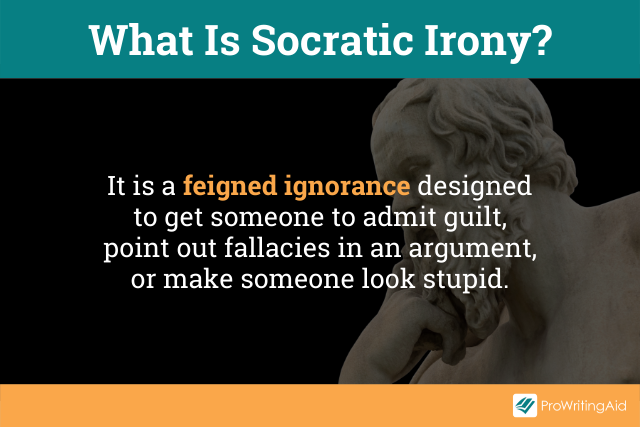 Socratic irony isn’t just for the classroom. It’s a rhetorical device where a person or character feigns ignorance to obtain information. It’s often used to get someone to admit guilt, so it shows up frequently in courtroom dramas and police procedurals.

Socratic irony can also be used to make someone look stupid or to point out fallacies in an argument.

Comedian and actor Sacha Baron Cohen often uses Socratic irony in his work. He plays ignorant characters, such as Ali G and Borat, with the aim of highlighting ignorance in other people.

A great example of Socratic irony comes from the movie Legally Blonde. Elle notices that the murder victim’s daughter has a hole in her alibi; she said she took a shower immediately after getting a perm.

Elle plays the “dumb blonde“ as she examines the witness, but then asks a series of questions about perms that the witness knows the answer to.

This leads to the witness admitting to murder on the stand.

Irony serves many purposes in literature. Understanding each type of irony can improve your understanding of storytelling and make you a better writer. 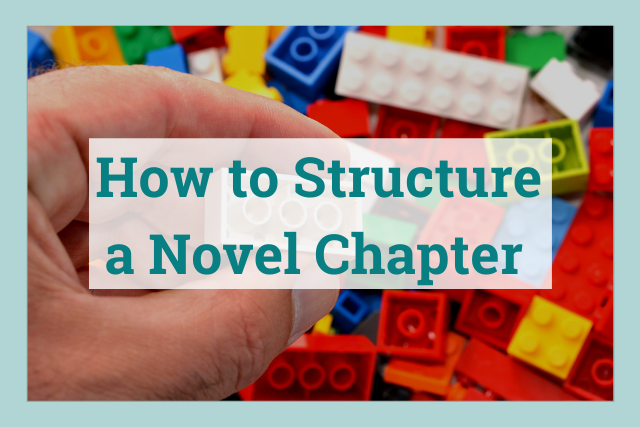 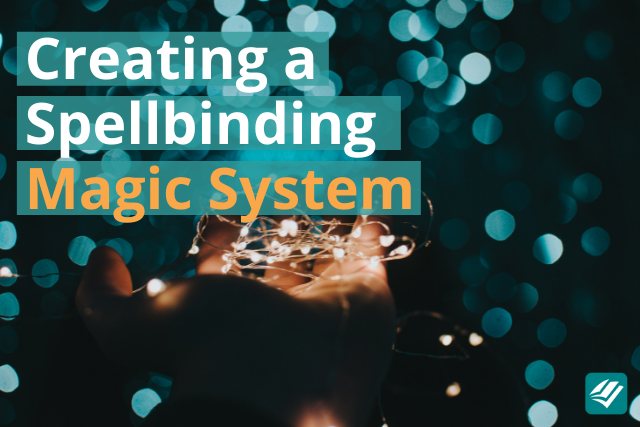 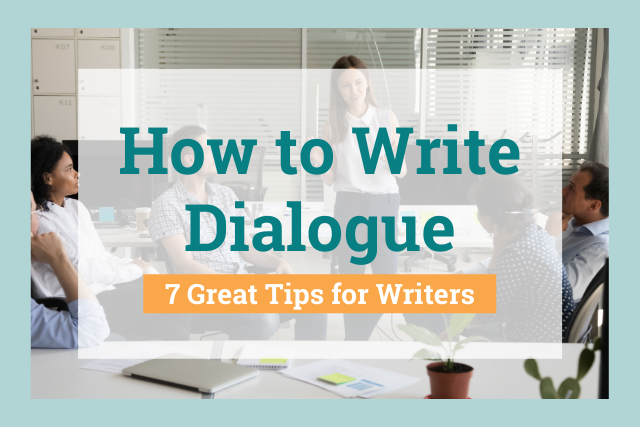 The Writing Process
How to Write Dialogue: 7 Great Tips for Writers (With Examples) 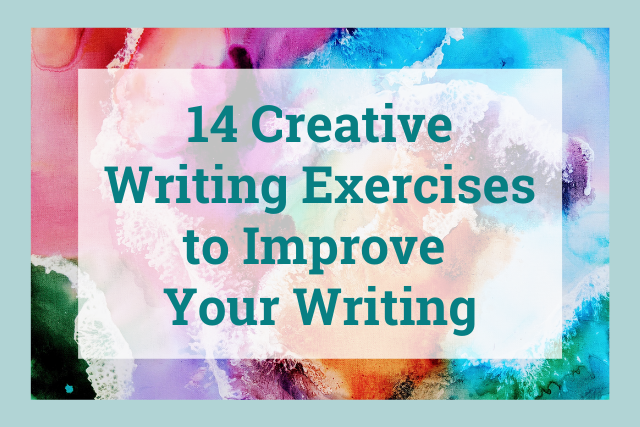 The Writing Process
14 Creative Writing Exercises to Improve Your Writing 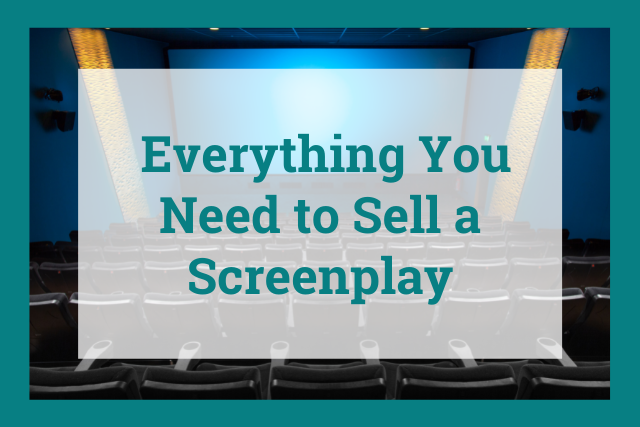