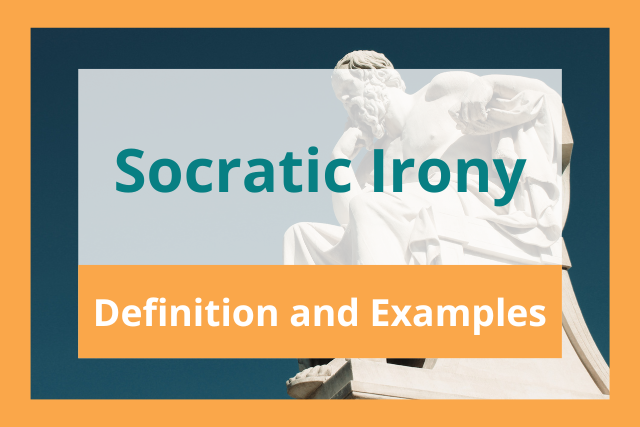 You’re probably aware of irony, but many people haven’t heard of Socratic irony.

Socratic irony is a rhetorical device that involves feigning ignorance to get to the truth of a matter.

We can use this type of irony in storytelling, as well as in everyday life.

In this article, we’ll define Socratic irony, highlight examples from popular culture, and show you how you can use it in your own writing.

What Is Socratic Irony?

Socratic irony is one of the four main types of irony. Irony is when the appearance of something is opposite to the reality of it.

Socratic irony occurs when a person pretends to be ignorant to entice others to admit to knowing or doing something. It’s sometimes referred to as “playing dumb.”

It gets its name from Socrates, the famous Greek philosopher, who used Socratic irony to tease information out of his philosophy students.

Socrates would ask a series of probing questions of his students to expose errors in their own beliefs and logic. The Socratic method of teaching is still popular among teachers and parents. 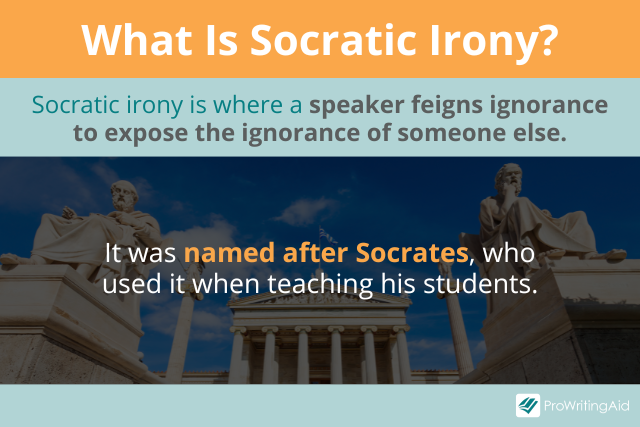 Socratic irony isn’t just for the classroom. It’s also used as an interrogation technique by investigators and lawyers. Playing ignorant can lull a witness or suspect into a false sense of security and expose inconsistencies in their version of events.

Socratic irony may have its origins in ancient Greece, but it’s used as a literary device in many movies and works of literature. Here are some instances of Socratic irony in action.

We see a great example in the final court scene of the movie Legally Blonde. As protagonist Elle Woods interrogates Chutney, the murder victim’s daughter, she uses Socratic irony to undermine her alibi.

Elle “plays dumb” as she questions Chutney on the perm she supposedly got at the salon. By pretending to be ignorant and asking a series of leading questions, Elle exposes Chutney’s lies and forces her to admit the truth—that she committed the murder.

His characters—Ali G, Borat, and Brüno—feign ignorance and ask ridiculous and outlandish questions of the interviewees. This questioning highlights the weaknesses in their beliefs and their own ignorance.

A less obvious example of Socratic irony is found in Mark Twain’s classic novel Huckleberry Finn. Twain is said to use the device to teach the reader moral lessons.

One reading of the novel suggests Twain plays ignorant through some of his characters, who espouse absurd and incorrect views on race. The novel’s themes of prejudice, empathy, and freedom expose the hypocrisy of these racist beliefs to the reader.

How to Use Socratic Irony

Socratic irony occurs when a speaker pretends to be ignorant to lure someone into making an admission.

The simplest way to use Socratic irony as a literary device in your writing is through dialogue. It’s especially useful in confrontational or investigative scenes, where one character is trying to get information from another.

You can also use Socratic irony to interrogate the views of the reader and expose weaknesses in their views. However, this type of usage requires a thorough understanding of the existing knowledge and beliefs of your audience.