Some vs Any: Differences, Grammar Rules, and Usage in Sentences

One tricky English grammar rule involves the difference between some and any. Both are words you can use when you don’t want to specify a number or an exact amount of something, but they’re not actually interchangeable.

The short answer is that some is usually used in positive sentences, while any is used in questions and negative sentences.

Read on to learn more about some vs any and how to use these words correctly in your writing.

What’s the Difference Between Some vs Any?

Let’s look at the meanings of some and any in more detail. 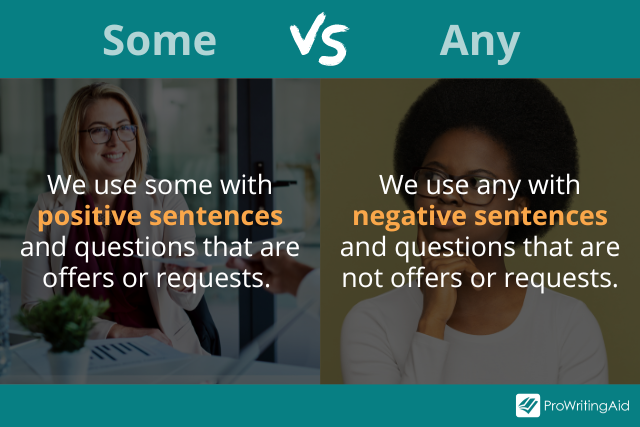 When to Use Some

Uncountable nouns are things we can’t count with numbers, such as water, air, and flour. If you’re feeling thirsty, you would just say "I want some water,” not "I want a water.” 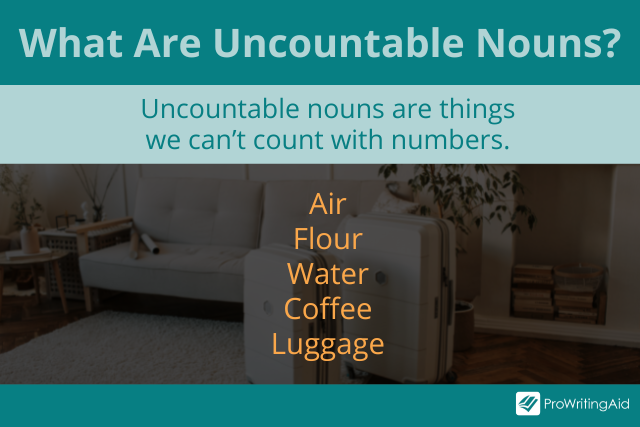 For example, you might say, “I saw some fish at the aquarium.” This example is a positive sentence because you’re saying that you did see fish. Since the exact number of fish you saw isn’t important, some is a good word to use instead of a specific quantity.

You can also use some in a question, but only if that question is an offer or a request. For example, you might say, “Would you like some water?” or “Can I please have some water?”

When to Use Any

Any is also a word you can use with uncountable nouns. The difference between any and some is that you should only use any in negative statements.

Negative sentences are sentences that state that something is false. You can turn a positive sentence into its negative form by adding a word like not, never, and without.

For example, you might say “I did not eat any of your cookies.” This example is a negative sentence, since it states that something isn’t true. Therefore, any is the appropriate word, not some.

As a general rule, you should also use any when you’re asking a question. For example, you might say, “Have you read any good books lately?” The only exception is when that question is an offer or a request.

Some vs Any Examples in Sentences

The best way to learn spelling and grammar is through examples. Here are a few examples sentences of some in a sentence:

Now let’s look at a few examples sentences of any in a sentence:

Conclusion on Some vs Any

There you have it—the complete guide to distinguishing between some vs any.

If you’re not sure about some of your word choices, you can run your writing through ProWritingAid any time. ProWritingAid will point out when you’ve used the wrong word, so you can correct your writing and publish with confidence.