Resorption vs. Reabsorption: What’s the Difference? 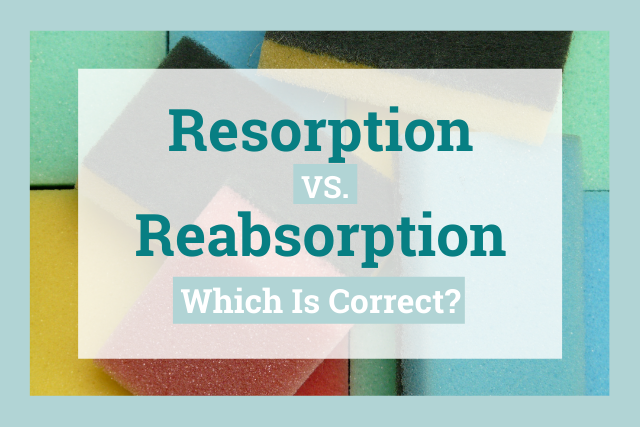 There’s a lot of confusion around the difference between resorption and reabsorption. They sound very similar, and refer to similar things, so even experienced writers often mix them up.

So what exactly is the difference between these two words?

In this article, we’ll help you remember the difference between resorption and reabsorption and show you examples of each word in context.

What’s the Difference Between Resorption vs. Reabsorption?

Let’s start with a basic definition of each word.

The noun reabsorption refers to the process of absorbing again. It comes from the prefix “re-” and the noun “absorption.”

Reabsorption is most often used in medicine to describe the process of something being absorbed repeatedly.

For example, if you absorb a substance, secrete it back out, and then absorb it again, the subsequent absorption is called reabsorption. 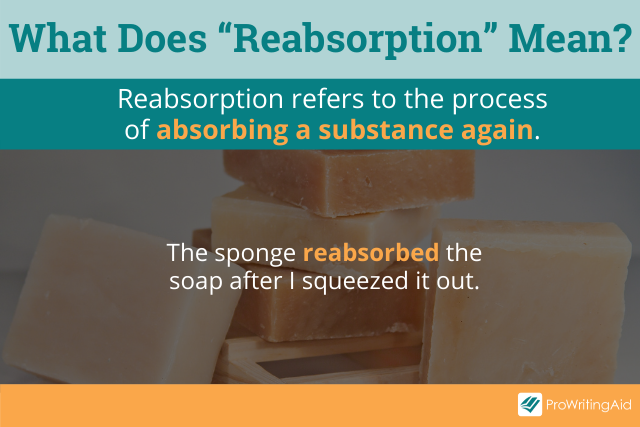 Politically, the word reabsorption often refers to a reunification between different countries or territories that used to be a single entity. For example, if an empire dissolves and then re-forms, you could say that the empire has reabsorbed its old territory. 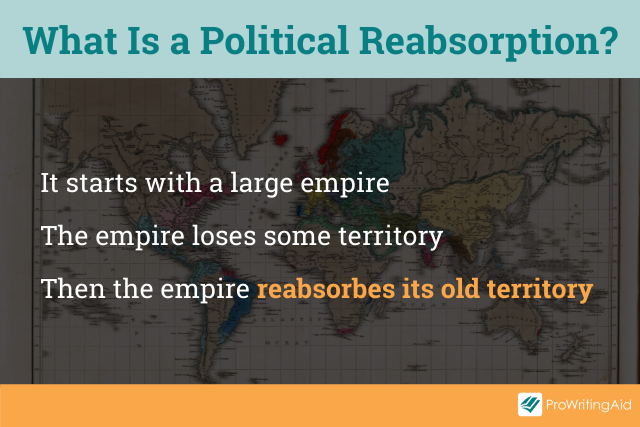 The noun resorption is often used to refer to the process of losing substance, due to that substance being absorbed by something else. 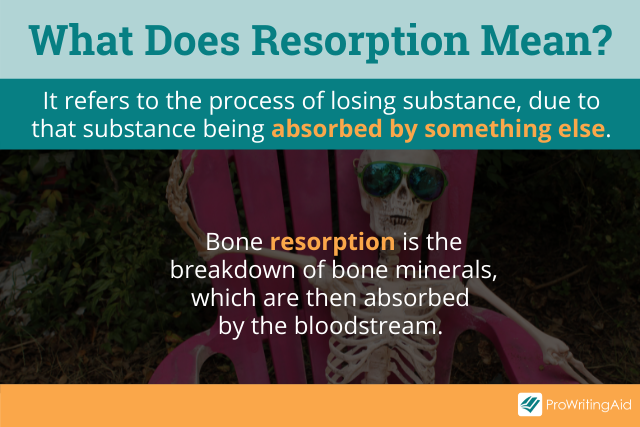 This word is most often used in medicine to describe the loss of tissue or bone. For example, bone resorption is a health condition that weakens bones.

Another medical term is fetal resorption, also known as “vanishing twin.” This occurs when one twin in the uterus absorbs the other, meaning that only one baby is carried to term.

Notice that all these examples of resorption involve absorption, just like reabsorption, but in these cases the process of absorption results in a loss.

We use the word resorption, not absorption,when talking about losing substance.

If you want to write about bone resorption, but don’t know which word is correct, you can always run your writing through ProWritingAid, which will suggest the word you need. 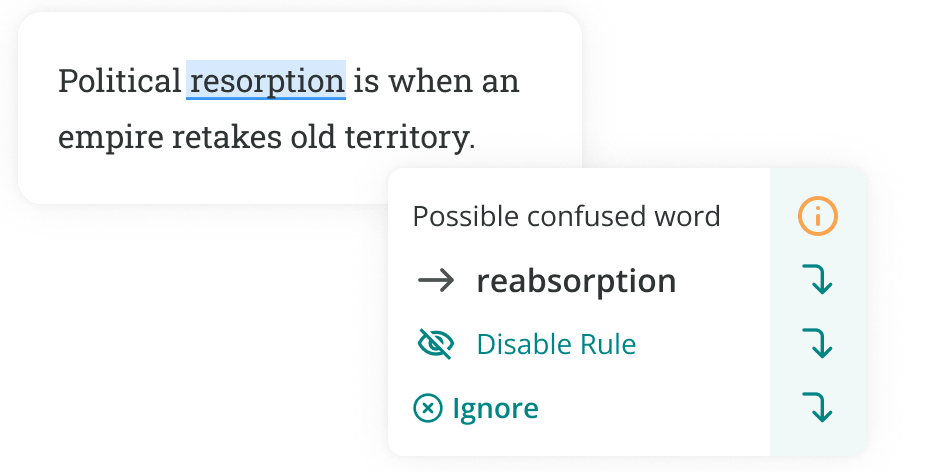 Examples of Resorption vs. Reabsorption in Sentences

Now let’s look at how to use resorption and reabsorption in a sentence.

“These drugs limit the reabsorption of the serotonin hormone, one of the main hormones associated with feelings of happiness.”—North Carolina Health News

“Adenosine triggers our sleep systems at night and is reabsorbed after a good night’s sleep.”—Discover Magazine

“The economic gap between the rich south and dirt-poor north of the peninsula grows ever wider, implying mounting reabsorption costs for South Korea.”—The Economist

“The relative inactivity stands in stark contrast to the hopes Iraqi and American officials had when the U.S.-backed exchange was reborn in 2004. Back then, expectations were that the toppling of Saddam Hussein a year earlier and the country’s reabsorption into the international community would bring with it an economic reflourishing.”—Taiwan News

“Gingivitis, periodontitis, and tooth resorption are the most common oral problems in cats, and home care, early detection and proper treatment are vital parts of keeping your cat healthy and pain free.”—Toledo Blade

“Incisors were selected for this study because they are the most prone to tooth resorption, while a small reduction of their length is easier to be detected by conventional radiography.”—Progress in Orthedontics

“My wife had resorption and now has an implant where that lower molar was.”—Dentistry IQ

“Bisphosphonates are a class of medication that prevents bone resorption—the breaking down of bone cells.”—VeryWell Health

Conclusion on Resorption vs. Reabsorption

One useful trick is to think of resorption as reabsorption without the “a,” “b,” and “p”—it’s lost these letters. Therefore, resorption is the word that describes loss.