Reeking Havoc vs Wreaking Havoc: Which Is Correct? 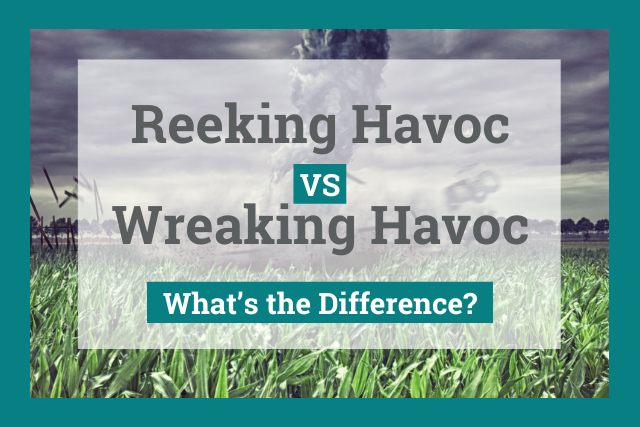 Many writers mix up the words reek and wreak, since they’re pronounced the same way. However, they actually mean very different things.

So, should you write reeking havoc or wreaking havoc?

The phrase is always wreaking havoc, because wreak means “to inflict,” while reek means “to emit a bad smell.”

This article will explain the difference between reeking havoc vs wreaking havoc and help you remember which spelling to use.

The phrase you’re looking for is wreaking havoc, which is defined as “causing great chaos or damage.” 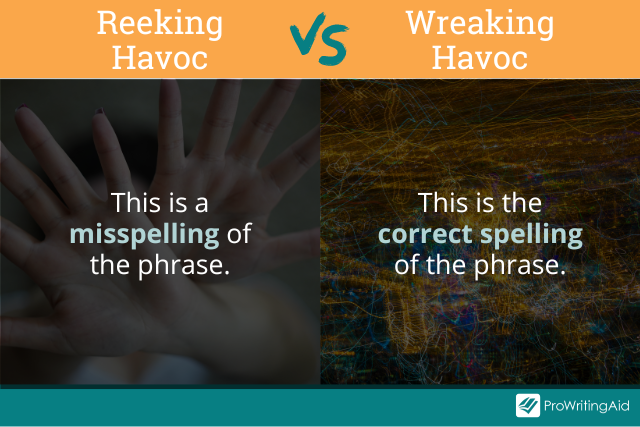 The word havoc means “confusion, destruction, and devastation.” To say that something is wreaking havoc is similar to saying that it’s causing havoc or inflicting havoc.

We use the phrase wreaking havoc when we want to say that someone or something is inflicting chaos, disorder, and destruction.

For example, you might say an earthquake wreaked havoc on a city if it uprooted buildings, wrecked cars, or destroyed streets.

Similarly, you might say your toddler wreaked havoc on your living room if she scribbled on the carpet in permanent marker, tore down the wallpaper, or left her toys strewn all over the couch.

The phrase can also be used in a less literal and more lighthearted way. For example, you might say that a soap opera is wreaking havoc on your sleep schedule if you’ve been staying up until five a.m. watching the show.

Is It Wreaking Havoc or Reeking Havoc?

You should always spell the phrase wreaking havoc with a w, because reeking havoc is incorrect!

To understand why wreaking havoc is the correct spelling, let’s take a look at the difference between reek and wreak.

The verb reek refers to the act of emitting a bad smell. For example, you might say, “Gross, your bathroom reeks!,” meaning that you think the bathroom smells bad.

Here are some examples of how to use reek in a sentence:

The verb wreak means “to inflict,” normally in a way that causes damage.

Here are some examples of how to use wreak in a sentence:

When you think about the meanings of reek vs wreak, it’s clear why wreaking havoc is the correct phrase. You want to say that something is inflicting havoc, not that something smells bad.

Is It Wreak Havoc or Reek Havoc?

Without the -ing at the end of the verb, the correct way to spell the phrase remains the same. You should always write wreak havoc, not reek havoc.

Remember the Difference Between Reek or Wreak

If you’re not sure you’re spelling these words right, ProWritingAid’s Realtime Report can tell when you’ve used the wrong word. It’s always a good idea to run this report in case you’ve mixed up the uses of homophones, such as wreak and reek.