Its vs It's: What's the Difference? 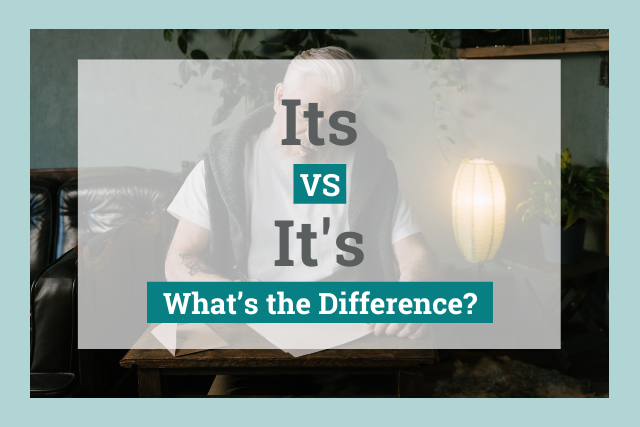 Mixing up it’s vs its is a common mistake in written English. These two words are only separated by an apostrophe, but they have very different meanings.

So what exactly is the difference?

Its (no apostrophe) is the possessive form of the pronoun it. Most possessives use an ’s, which is probably why many people find this confusing.

It’s (with apostrophe) is the shortened form of it is. This contraction is why the possessive its lost its apostrophe.

This article will explain the English grammar rule for how to use its vs it’s correctly.

What’s the Difference Between Its vs It’s?

The words its and it’s are both pronounced the same and have the same base pronoun it. But the addition of that apostrophe changes the meaning completely. 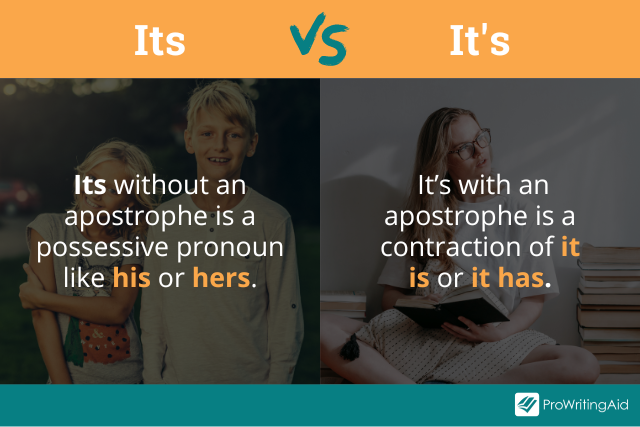 It’s with an apostrophe is a contraction of it is or it has.

Its without an apostrophe is not a contraction but a possessive pronoun like his or hers. These are possessive versions of the personal pronouns it, he, and she.

For example, you would write, “he rubbed his nose,” “she rubbed her nose,” and “it rubbed its nose."

Every version of this sentence makes sense because each word showing possession (his, her, its) corresponds with its matching pronoun (he, she, it).

When to Use Its and It’s Correctly

Here’s the golden rule: If it is or it has can replace the it’s in the sentence, then you should use an apostrophe. If not, no apostrophe!

That’s all you need to remember. It’s that simple.

If you’re not sure whether or not you need an apostrophe, you can run your work through ProWritingAid, which will catch grammar and spelling errors for you! 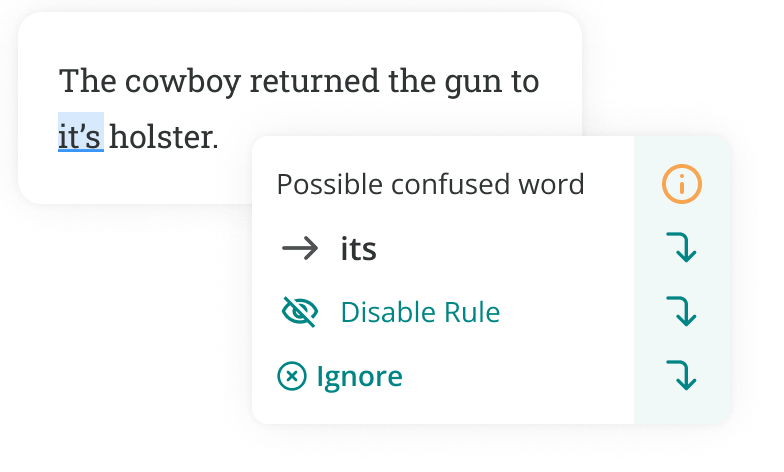 See how many writing errors you can catch with a free trial.

Short History of the Possessive Form of Its

Originally, English (or rather Old English) functioned in the same way as many other languages and had nouns that were gendered—either masculine, feminine, or neuter.

For a long time, however, the possessive determiner of a neuter noun was represented with his. Thus, in the prologue to Chaucer’s The Canterbury Tales you had the line:

In Modern English this translates to:

Around 1600, English writers started to swap the his for the neuter pronoun it’s, but (somewhat confusingly for our purposes) did so with that pesky apostrophe in place.

It was in the 1800s that English writers finally dropped that apostrophe altogether and settled on the usage we have today: “with its sweet breath.”

Its vs It’s Examples in Sentences

You should use it’s when you wish to form a contraction of either it is or it has, for example:

Use its as a possessive word, like his or hers, e.g.:

When in doubt, remember this simple rule: If you can replace the word it’s with it is or it has, then write an apostrophe. If not, no apostrophe is needed!