How You Doing: How to Use This Phrase Correctly 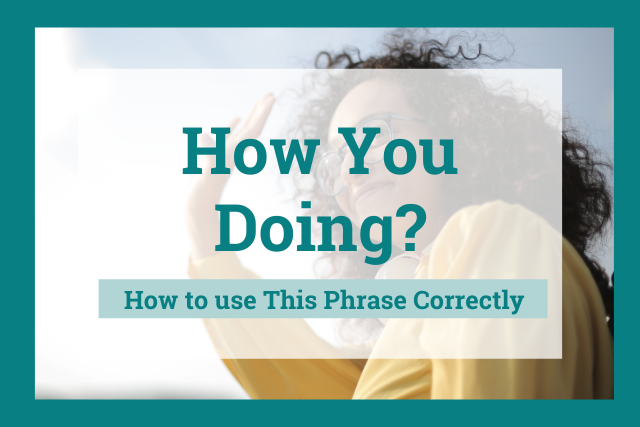 When you’re at work, at school, or at the grocery store, you might hear the phrase “How you doing?”

This phrase is a common greeting among native English speakers, even though it’s not grammatically correct. Learning more about this phrase can improve your English vocabulary.

So what exactly does this phrase mean, and when should you use it? Essentially, it’s an informal way of saying “How’s it going?”

Read on to learn more about what this popular phrase means, and how to use it correctly.

How You Doing Meaning

The phrase “How you doing?” is a question that serves as a general greeting in colloquial speech. It is similar to “How’s it going?”

The intent of the question is to say hello and enquire about someone’s well-being. For example, if you’re reuniting with a family member you haven’t seen in a while, you might say “How you doing?” to ask if they’ve been well. 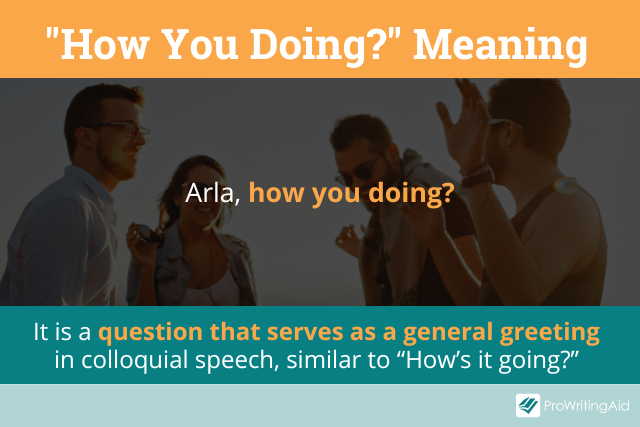 This question isn’t meant to elicit a serious answer or ask for specific information about someone’s life.

Most people reply with a simple response like “good,” “not bad,” or “fine,” rather than going into detail about how they’re doing.

Here’s an example of a conversation that uses the phrase as a greeting.

Over the years, the phrase has picked up some other connotations, which you should be aware of if you’re planning to use it.

For example, this phrase is often associated with New Yorkers of Italian descent. Some people use this phrase to stereotype Italian American accents, with a long U sound on the word “you” and a dropped G on “doing.”

In stereotypical mobster movies, you might hear this phrase spoken in a confrontational tone to convey a threat, rather than a sincere greeting.

Here’s an example of a conversation that uses the phrase in a confrontational way.

In other cases, “how you doing” can be used as a pickup line. If you say it playfully to someone you’ve recently been introduced to, they might interpret it as flirtatious, rather than simply a casual hello.

In fact, the phrase has been used so often in this context that it’s now seen as a cliché way to flirt with someone.

The person you say it to will most likely be exasperated because it's one of many overused pickup phrases.

Here’s an example of a conversation that uses the phrase in a flirtatious way.

Because there are multiple connotations of “How you doing?” you should avoid using it with complete strangers to make sure you don’t start on the wrong note.

It’s more appropriate to use the phrase with friends and acquaintances when you're in a good mood or want to start the conversation in a fun way.

When you do use this phrase with strangers, make sure you say it in the right tone so it’s clear you’re genuinely asking about their well-being.

How You Doing Quote

“How you doing?” is a popular quote from the TV sitcom Friends. It was first used by Joey in the episode “The One with Rachel’s Crush,” where he teaches Rachel how to ask her crush on a date by asking him, “How you doing?”

He emphasizes the word you, like many stereotypical Italian Americans. At first, Rachel doesn’t believe this line will work, but Joey proves it does by asking someone out this way. 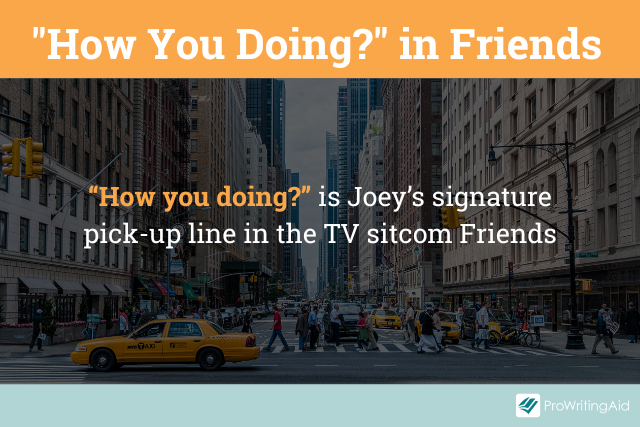 In later episodes of Friends, the phrase was used as a running joke and became Joey’s signature pickup line. Since then, this quote has become almost as famous as the TV show itself.

You will find T-shirts and bumper stickers featuring this quote, and many people who use this common question might be referencing the TV show.

However, Joey isn’t the only one who’s used this phrase. How you doing? has been in use since the 1940s, and you might hear it in a variety of different contexts today.

The Correct Version: How Are You Doing?

“How you doing?” isn’t a grammatically correct sentence because it omits the central verb, “are.” It’s a shortened form of “How are you doing?”

In professional settings, you should stick to a more formal greeting.

When you’re writing an email, for example, you could write one of the following two phrases: “How are you doing?” or simply “How are you?”

Using good grammar and polite phrases can make you look more skilled and reliable, unless you’re emailing someone you know well. 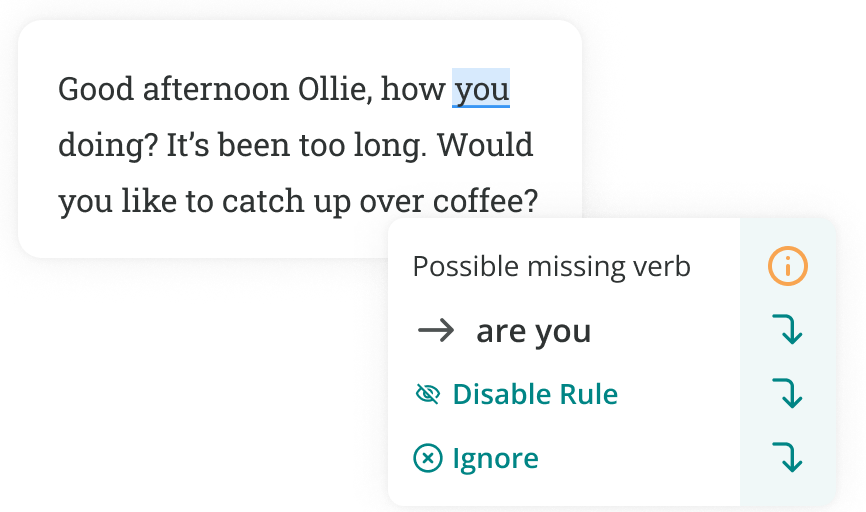 On the other hand, if you’re writing a line of dialogue in your story, you can use whichever version you think the character would be more likely to say.

In some cases, you might even want to spell the phrase “How ya doin’?” which is an even less formal version of the same question.

Summary of How You Doing

“How you doing?” is a popular phrase that you can use to greet people. It’s been used as a catchphrase in multiple TV shows.

It’s best to use this colloquial phrase with friends and family, rather than in formal settings.

Depending on the situation, there are numerous alternatives you can use.

However, if you want to use Joey Tribbiani’s signature catchphrase, you should go for it! Lots of people will recognize the Friends reference, and you might make some new friends along the way.