How to Write a Whodunit: Tips and Plot Twist Ideas 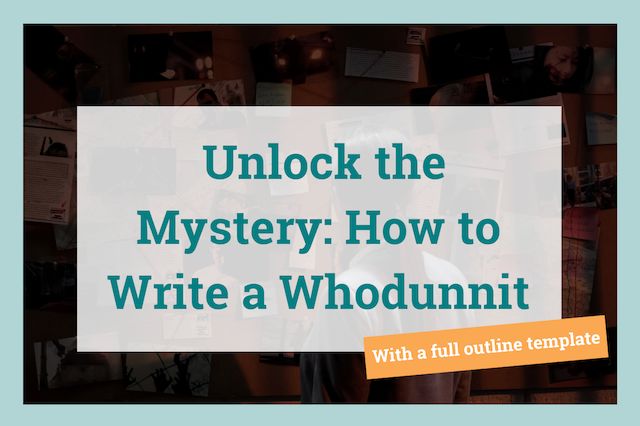 If you’re thinking about writing a whodunit, you will take your reader on a discovery journey. Most mysteries start with a crime, not always a murder, and end up with who, what, where, when, and why.

The story starts with the crime and to construct the story you, as the writer, need to discover who the criminal is and the motivation for the crime. Your whodunit constructs a puzzle around solving the crime.

Who’s in Your Whodunit?

Although readers love the puzzle, they engage in your story by connecting with the characters.

Build a solid cast of characters to emotionally connect your reader to the story. To get your reader involved in solving the crime, they need to care about the characters. Your characters drive reader engagement.

Readers expect to find certain characters when reading the genre. You have leeway around the story setting as well as the emotional ties, action, and plotline revolving around those characters.

The victim of the crime is the fulcrum around which the rest of the story pivots. Without them, there’s no whodunit question. Your victim connects to all the suspects, including the villain.

Your entire story leads to the revelation of the villain. As cunning, clever, and intelligent as your detective, the villain builds smokescreens and creates false trails that puzzle the reader and your sleuth.

Your sleuth is the reader’s guide to solving the puzzle. Whether professional or amateur, their goal is to find whodunit. Your detective has a strong personality and, like any protagonist, takes action. Create strengths and weaknesses to make them relatable and engaging.

Suspects have a connection to the victim. Each suspect tests your sleuth’s skills in discovery and deduction.

They each have a unique personality which tests your sleuth, and the interactions between detective and suspects are the meat and potatoes of your story.

One of the suspects eventually turns out to be the villain, but the set of suspects create the puzzle for your sleuth and your reader to solve.

Supporting characters enhance your sleuth’s world. They add dimensions to your protagonist and to the story. These run the gamut from sidekick to love interest.

You may add a guiding mentor or a jealous colleague. Every interaction your protagonist has with supporting characters enlarges the story.

Create a character bible to keep track of all the characters in your mystery, even the minor ones.

Fill in each character’s background with personality traits, unique dialogue phrases, and patterns. Know how each character relates to the other characters and their role in the story. Once you have a good grasp of your characters, you can refer back for details as you are writing.

Check out our guide to writing crime characters your readers will remember, with tips on motivation, creating character relationships and more.

The Plot Is the Puzzle

The whodunit plot guides the story from the initial crime to revealing the villain at the end. Your role as a writer is to create a puzzle the mystifies your sleuth and your reader, all the while leaving clues that lead to a logical conclusion.

A good whodunit follows traditional story plotting. When you know the structure, it’s easy to keep the main events in your head as you write. Each event is a destination and at each destination, the story changes.

While some authors write in discovery mode, not knowing who the villain is until they get to the end, they always make sure the storyline is complete after the first draft.

Even if your plot is gripping, if your pacing is wrong then your reader will get bored. When you’re wrapped up in the mystery it’s easy to dive too deep into the details. Make sure you’re varying your exposition, action, and dialogue with ProWritingAid's Pacing Report. 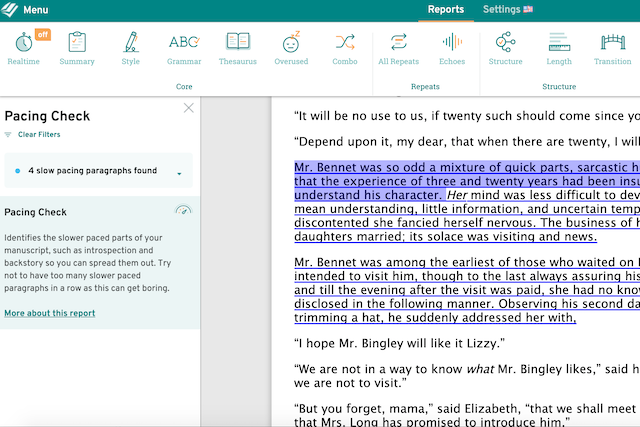 Act One: Set Up and Complicate

The beginning is about bringing your reader into the story. In a mystery, you introduce them to your sleuth and, usually, the murder.

One of the best ways to introduce your sleuth is to show them solving a problem. This shows your readers your sleuth can do what they’ll need to do to find the murderer.

Illustrate at least one of your sleuth’s strengths you’ve created in your character background. If you know how they will catch the villain, mirror that talent in the beginning.

Once your reader knows your sleuth and sees them in action, something happens that triggers your story.

Move your sleuth out of their everyday world into a new challenge. In this scene, present them with a challenge they didn’t see coming.

Something happens that pulls your sleuth toward the main mystery. It could be a new neighbor, an old lover, a vehicle breakdown, or anything you want to imagine.

Although your sleuth (and your reader) doesn’t know it yet, this small disturbance in their regular life is leading them toward the big mystery.

Once you introduce this event and show your sleuth’s reaction(s), it’s time to meet the mystery head-on.

Now you introduce the dramatic event that must be answered in the climax of your story. In a mystery, the sleuth is brought in, or volunteers to find the killer.

How this event unfolds will depend on the type of mystery you write. A cozy heroine may take on the search or a cop may be up next on the rota. Either way, your detective enters the mystery and takes on the challenge of solving the puzzle.

Now your sleuth must poke and probe to learn about the victim and the murder. He examines physical evidence and discovers a list of possible suspects.

This is the place where you introduce any subplots. Perhaps the sidekick has a problem, your sleuth meets a love interest, or outside forces put pressure on them.

Things aren’t going smoothly with the case, either. A piece of evidence is lost or your sleuth misinterprets (for now) its significance.

As he meets suspects, they have their own personal reasons for resisting and not fully cooperating. Challenge your sleuth at the pinch point. Whatever he thinks is the right approach doesn’t work.

Your sleuth is nowhere near discovering who the killer is. During this discovery phase, throw in as many complications as you can. Make each complication more challenging than the last. More complications mean more tension and more tension keeps readers guessing and turning pages. 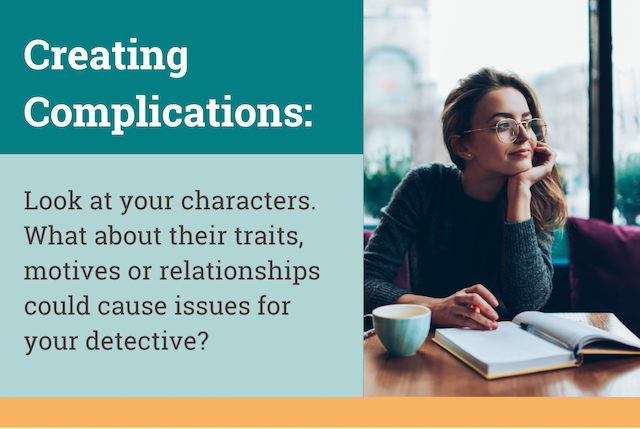 The midpoint comes between Act Two and Act Three. The story pivots. Your sleuth may discover that he’s been going down the wrong path and has to rethink everything. He may be so discouraged he thinks about giving up.

After the midpoint, your sleuth looks for an alternative approach to solving the puzzle and it doesn’t go well. Your sleuth must re-examine everything they learned in Act Two. Add complications and twists to the subplot(s) here.

The second pinch point shows your sleuth that the new direction they chose after the midpoint will not get them the results they want. The undiscovered villain may set a trap that confuses your sleuth. Your sleuth realizes they’re in over their head.

Now your sleuth must gather forces. She may find new support, discover new evidence, and somehow get closer to discovering the murderer.

Your sleuth examines all the old evidence with new information and a fresh approach. She’s looking for the evidence or suspect statement they overlooked before.

Once on a new discovery path, your sleuth feels closer to the killer.

The killer uses a smokescreen and everything the sleuth thought she knew leads nowhere. Your sleuth needs to clear their vision of the victim’s world and take a new approach.

Your detective is captured or blocked from finding the killer. The victim’s world becomes more of a mystery. Your sleuth is just not seeing anything the right way. If they’re trapped/captured, there’s no way out.

But then, your sleuth sees a way out. After the escape from the trap or block, they start rethinking and get a glimpse of who the killer might be. But, there’s still something that isn’t clear. They get ready to confront the killer, but there’s one last defeat, and it’s the biggest of all.

Your detective knows the killer is dodging but can’t get to that final confrontation.

The killer pulls out one last trump card, one the detective didn’t expect. Whether it’s a battle of wits or hand-to-hand fighting, the killer plays that one last card.

Your detective finally realizes how to confront the villain and challenges him face to face. At this point, your sleuth reveals the murderer. In addition, your sleuth shines the spotlight on their special skill(s) that led them to this final confrontation and revelation.

In the midst of all this rising action, bring each subplot to conclusion, because once your sleuth reveals the killer, you’ve finished your unwritten agreement with your reader to solve the puzzle.

Here's how this outline looks on a timeline: 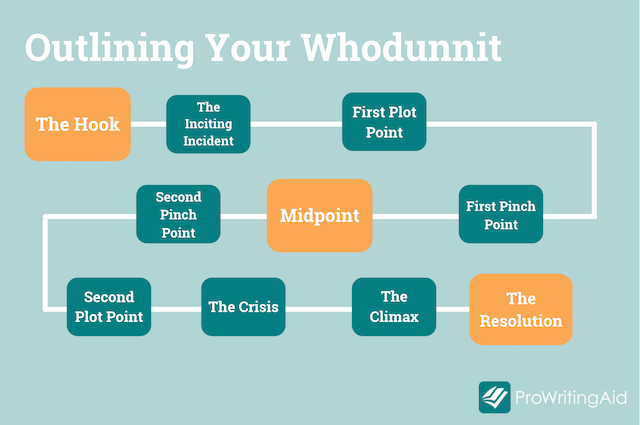 Keep this template handy so you always know what your next step will be.

Once your sleuth has revealed the villain, wrap up your mystery. When the killer is revealed, bring your story to a quick conclusion.

A straightforward way to approach a whodunit is in two parts. Before the middle, the story expands.

The reader receives information in suspects, clues, and evidence. After the middle, the story contracts. Your sleuth eliminates false clues and suspects one by one until the logical conclusion is the villain.

Think of your whodunit as a discovery journey ending in revelation. As mystery writer Walter Mosley says, “It’s the fun of writing.”

Looking for more tips to help you write your novel? Download this free book now: