Grey vs Gray: How Do You Spell This Color?

Grey and gray are two different spellings of the same color.

The spelling gray is common in American English, while grey is the more common spelling in British English and other English-speaking countries.

In this article, we’re going to explain the difference between gray or grey and look at some examples of this word in action.

What’s the Difference Between “Grey” and “Gray”?

Like many words in the English language, the word gray has two spellings. Grey is the British spelling, and gray is the American spelling.

Despite the spelling difference, both gray and grey have the same pronunciation and origin. Both spellings come from the Old English word grǽg. Then, in the fourteenth century, the spelling greye appeared in the French poem “Roman de la Rose.” Over time, the second E was dropped, and grey became the most common spelling, with gray as a secondary, less prominent spelling.

However, when you are writing proper names or proper nouns, do not edit the spelling for British or American English. For example, always spell Earl Grey tea with an E, not an A, because it is a proper noun.

When to Use Grey vs Gray (Examples in Sentences)

The best way to learn how to use a word is to see it used in context. Here are some more examples of the color gray in sentences.

Now, let’s look at some examples of the color grey in sentences.

Use ProWritingAid to Correct Your UK or US Spellings

You can use ProWritingAid to help you select the correct version of grey or gray every time.

If you’re writing for an American audience, you can set your language in the tool to American English, and ProWritingAid will detect any British spellings you might have missed and suggest the correct American version. 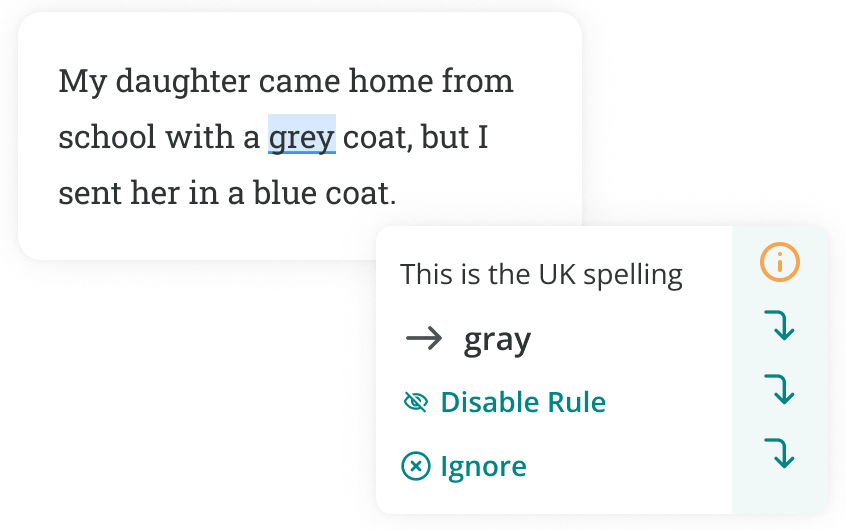 If you are writing for a British audience, you can set your language to British English, and the tool will detect and correct any American spellings. This feature of the tool is invaluable to me as a content writer, as there are so many subtle differences between the two forms of English to learn.