Sale vs Sell: What's the Difference? 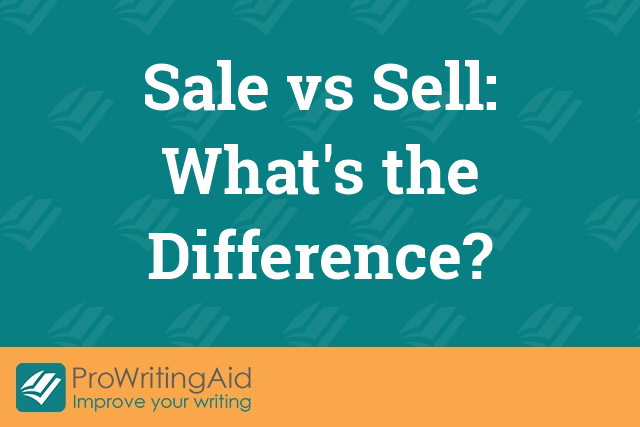 Sale and sell are homophones, which are words that sound the same but have different spellings and meanings.

If you get confused wondering whether you should use sale or sell, we’ve got you covered.

What Is the Difference Between Sale and Sell?

When it comes to sale vs. sell, the difference is the function of the words in the sentence (also called their part of speech).

Sale is a noun, and sell is a verb. But because their meanings are related, it’s easy to get these two words mixed up. 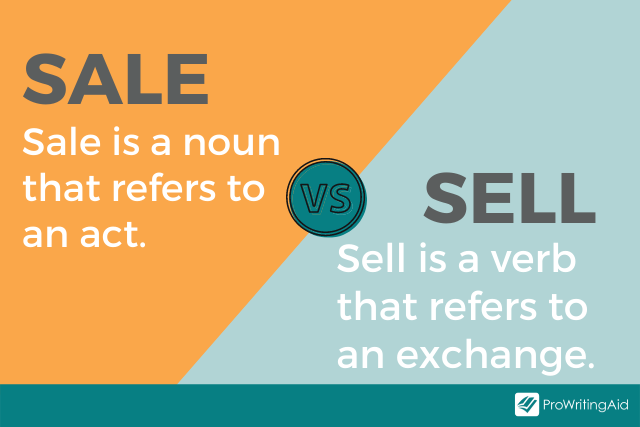 Sale has a few different definitions, but they all mean more or less the same thing.

In its most basic definition, sale is the act of selling goods or services. It can also refer to an amount of something sold, or a special time of reduced prices. 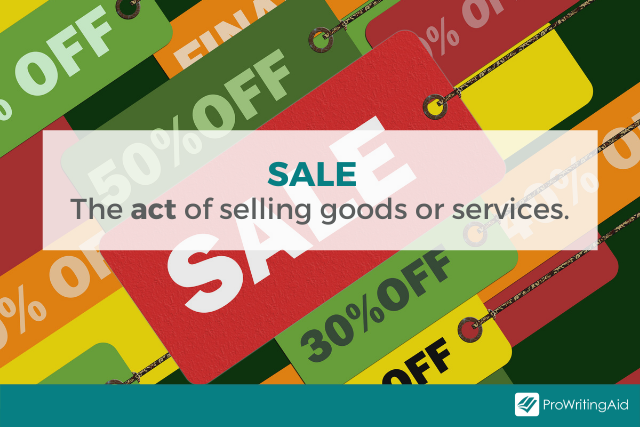 All of these definitions are nouns. If you are talking about the transfer of goods or services for money in the noun form, you will use sale in your writing.

What Does Sell Mean?

Sell, on the other hand, is a verb that means to exchange goods or services in exchange for money or other forms of currency.

It can also be used in a more metaphorical sense, as in “to sell an idea to someone” or “sell your soul.” 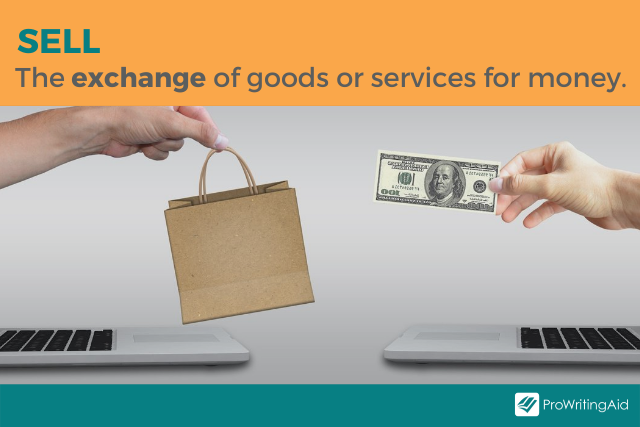 Sell can be used with an object, like “sell a house” (the house is the thing we are selling, so is the object of sell), or without an object, as in “not the right time to sell” (referring to the action of selling a house more generally).

Sell is an irregular verb. The past participle of sell is sold.

How Do I Remember the Difference Between Sell vs Sale?

When you’re writing and you need to decide between sale vs. sell, you might not remember which word is the noun and which is the verb.

One easy way to remember the difference is that sale has an a like the word auction, which is a noun that is a specific type of sale. Sell has an e like exchange because when you sell something, you are exchanging it for money.

Don’t worry if you still get confused sometimes. That’s what ProWritingAid is for! Download the browser extension to see live spelling, grammar, and style corrections as you write, wherever you write. 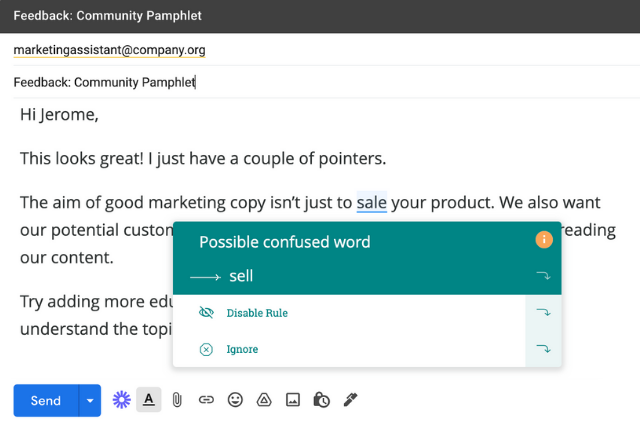 You’ll never send an email with a typo again.

How Do You Use Sale in a Sentence?

Sale is used when you need a noun (a thing, place, person, or idea) in the sentence.

There are many ways to use sale in a sentence. Let’s look at a few examples. 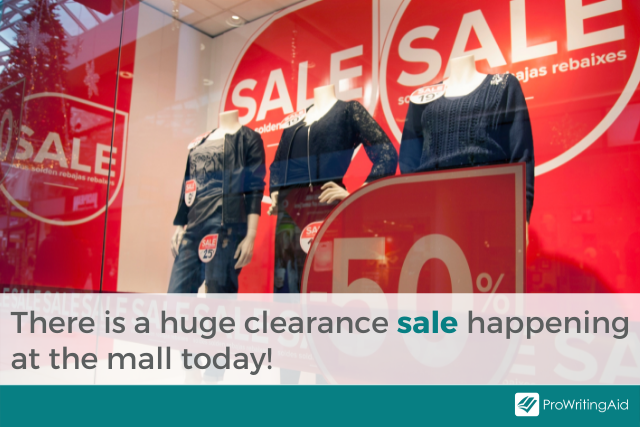 And here are some examples from literature.

As you can see, there are tons of ways that we can use sale in our writing. Can you think of any more examples?

How Do You Use Sell in a Sentence?

Because it’s a verb, sell might appear in different forms depending on the tense, mood, and aspect of the verb. Remember, the past tense and past participle of sell is sold.

Here are some examples of how to use sell in a sentence. 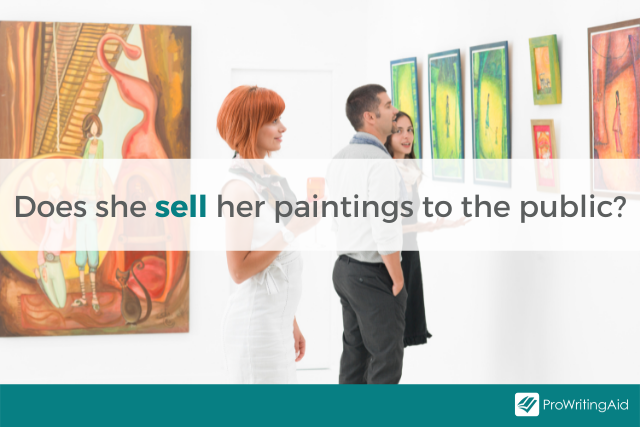 Let’s check out some examples from literature, too.

These are just a few ways to use sell—you’ll hear lots more in day-to-day life.

What Are Some Examples of Sale vs. Sell?

We’ve covered the basic premise of sale vs. sell. We know that it all comes down to the part of speech. But sometimes, the part of speech might not be as clear. Sale and sell both appear in phrases where it might be harder to pinpoint whether we need the noun or verb.

For example, is a person who works in “sales” and “sells” things a salesperson or sellsperson? Ostensibly, they could both make sense. But the correct word is salesperson.

Sometimes, the phrase that contains the word may have a different part of speech, which makes it more confusing!

Do you know the word for when someone compromises their values or authenticity, usually for money or fame? The word is sell-out. Even though that’s a noun, we use sell instead of sale.

We say that a person is a tough sell (meaning hard to sell something to), not a tough sale, even though you’d think you would need a noun.

On the flip side, do you make a sales call or a sells call? You are selling something on the call, but the correct form is sales call, which is a noun.

You sell brownies at the bake sale. You host a garage sale or a yard sale to get rid of excess junk in your home. Those might be more straightforward, but other instances are easier to confuse.

This is a phrase you probably hear and see often. It’s tricky to determine whether you need a noun or a verb in this phrase because both seem like they could make sense. However, the correct phrase is for sale.

This might be my favorite phrase involving sale vs. sell because I love a good deal. Like the example above, when something is discounted, we say on sale.

What Is the Difference Between Sale Price and Selling Price? 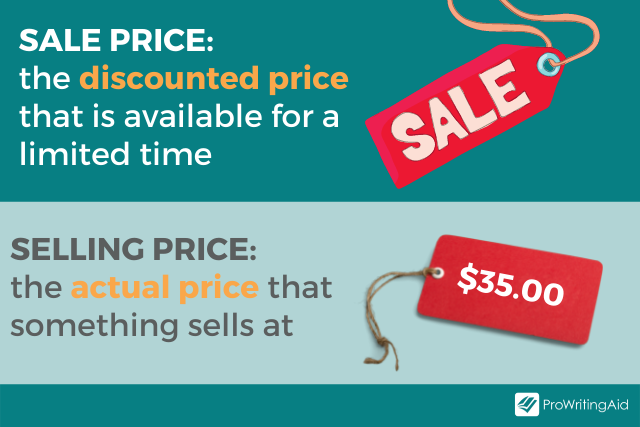 Here’s a tricky situation. How do you know whether to use sale price or selling price since both are correct phrases?

In general, the selling price is the price that something sold at. You might see this particular phrase when talking about real estate. There is often a list price or asking price that is higher or lower than what it actually sells for.

The sale price is used to describe a reduced price for a limited time. It is the cost when it is on sale (discounted).

How Do I Know When to Use Sell or Sale? 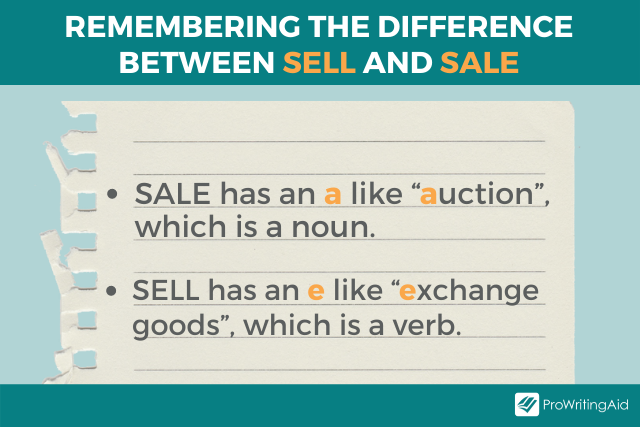 Now you try! Can you get these examples correct?

The answers to the sentences are:

How did you do?

Now that you know the difference between sale vs. sell, you’ll never get mixed up again!

Examples of sale in a sentence

Yet a couple of thousand dollars will buy it, assuming you can locate an example for sale.”
- The Burglar Who Studied Spinoza by Lawrence Block

The okapi is not for sale, nor is the platypus or the aardvark.
- Beatrice and Virgil by Yann Martel

Love for sale
- The Meaning of Tingo: And Other Extraordinary Words from Around the World by Adam Jacot De Boinod

The wheels happen to be InterCon format, so I've had a pretty fair sale."
- RX for Chaos by Anvil, Christopher/ Flint, Eric (EDT)

He was too nervous about the sale.
- Exile's Return by Raymond E. Feist

Examples of sell in a sentence

I still can’t ice-skate worth a damn, but I can sell it.
- Some Girls: My Life in a Harem by Jillian Lauren

Until age thirty-five I did my damnedest to sell, sell-out, get-in, get-on.
- A Graveyard for Lunatics: Another Tale of Two Cities by Ray Bradbury

And as soon as I started wearing it, my paintings began to sell.
- The Haunted Air by F. Paul Wilson

I could sell it to Copperfield for a mint.”
- Beyond belief by Roy Johansen

He’ll even sell us the furnishings.”
- Touch of Darkness by C. T. Adams; Cathy Clamp