Fantasy Characters: 4 Common Traits and Ideas on Creating Them

It doesn’t matter if your character is a blue goblin, a fae queen, or a disembodied spirit. If your readers can’t relate to your character, they will not be invested in your story.

Whether you consider yourself more of a plot-driven, world-driven, or character-driven writer, the fact remains that characters are what bring your story to life for your readers.

I often find myself frustrated when fantasy characters aren’t believable. Obviously, I know that witches and fairies and werewolves aren’t real, but they need to feel real within the world you’ve built.

How to Create and Write Fantasy Characters

When creating a fantasy character you want to tap into the reason readers would become hooked to your story. It's no doubt that we are inherently drawn to things that are similar and it's no different when it comes to the relationship between readers and characters in your book.

Simply put, readers are looking for characters they can relate to and who stir up strong emotions. Of course, we'll never be able to fly or shoot magic from mystical wand but we can see ourselves in these fantasy characters. We feel the same angst, determination, joy, sadness in our routine lives. And that familiarity has us rooting for them from start to finish.

How can you ensure that even your half-dragon warrior bard feels realistic? The answer is not in their appearance or their magical abilities. It’s in the things that truly make us human. Here are four traits to explore as you create a fantasy character

In The Witcher, Yennefer’s motivation is to regain her choice to be a mother so she can leave a legacy. This drives every action of hers. In The Lord of the Rings, Frodo’s motivation is to save Middle Earth by destroying the ring. Gollum’s motivation is to possess the ring, the only thing that has ever brought him any semblance of happiness.

We all have a motivation or motivations that drive us. Maybe you strive for financial stability, love, protecting your family, leaving a legacy, spiritual enlightenment, or making a difference in the world. It might not be epic-fantasy level, but we all want something at our core. We can understand characters who want something. When they don’t, the entire story crumbles around them.

Motivations don’t just apply to your main characters. Every character in your story should want something because motivations determine actions. Their motivation doesn’t have to be as fleshed out as your protagonist and antagonist’s, but you should still be mindful of what every character wants.

Story stakes are determined by motivation as well. What is standing in your character’s way, and what happens if they don’t achieve it?

Here are some great examples of character motivations from Bang2Write. 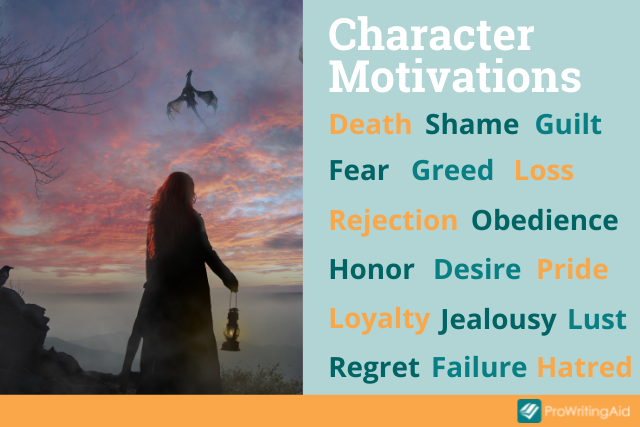 Confession: I hate Die Hard. I know, it’s an action movie, not fantasy, and it’s supposed to be campy (I think.) But the main reason I hate it is because John McClane is portrayed as having no real character flaws.

Even his hinted penchant for extreme force as a cop is glossed over as acceptable because he’s basically a vigilante good guy. Sure, he has a little complex about his wife’s success, but not enough that it affects the plot.

Nobody’s perfect, and when characters are too perfect, they instantly become unrelatable—and even unlikeable!

Here are some common character flaws you can give your characters:

Even when a character’s flaw is not one of ours, they become relatable because we all know someone with each negative trait. They become real through their imperfections.

One of the best ways to make your fantasy characters realistic is to give them some big secret or an emotional wound. I’m not suggesting that every person in the world has a major traumatic event in their past, but many people have some tragic, defining moment that affects who we are and how we act.

Emotional wounds or secrets help character motivations and personality flaws make sense. Does your Elf have a problem with authority and seek independence because of an abusive parent? Does your Fae prince have trouble opening up because the truth is he is an illegitimate heir and must guard that secret with his life?

If you aren’t sure where to start with emotional wounds and how they affect a character, check out The Emotional Wound Thesaurus: A Writer's Guide To Psychological Trauma by Angela Ackerman and Becca Puglisi. It’s a great resource for deepening your character’s backstory. 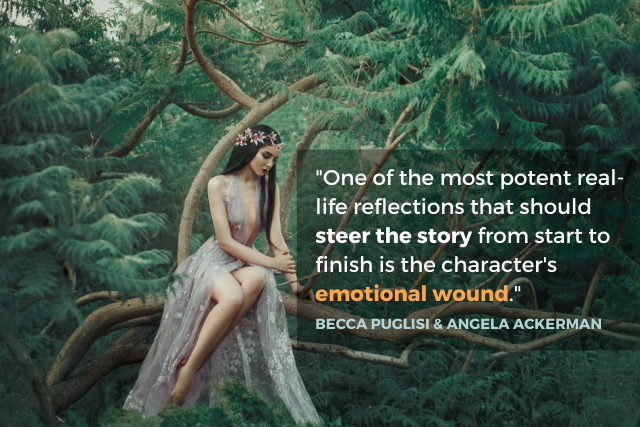 4. Express Their Emotions and Emotional Responses

All of these other factors are great for writing believable and relatable fantasy characters, but if the reader cannot see how they feel and act as a result, that realism will be lost.

Even stoic characters like Geralt from The Witcher have emotions and emotional responses. Your character doesn’t have to wear their heart on their sleeve, but they need to express—internally or externally—their anger, fear, and happiness. Additionally, they need to react in a way that makes sense for that emotion.

Anger for a stoic dwarf might result in a flush of heat or a clenched jaw. For an emotive witch, it might involve lashing out verbally or physically. Sadness doesn’t have to mean crying; it could mean withdrawing from others or seeking relief through drink.

In every scene, ask yourself what your character is feeling to determine how to show that emotion.

If you're a fantasy fan like we are then you're no stranger to these characters. Whether they play the role of hero, villain or xyz they provide great insight into how a fantasy character should be created. You'll recognize how the various elements prior come together to make them some of the best fantasy characters ever created.

We're starting our list with "the boy wonder", the titularr protagonist of the popular fantasy series— J. K Rowlings Harry Potter. Over a series of seven fantasy novels readers are introduced to the (mis)adventures of Harry Potter, a young wizard who is flung into the world of magic after previously living a more or less dull life.

Harry Potter is seen as brave, humble, and loyal; guided strongly by his conscience and his do-good attitude. Harry Potter does have flaws of course—he is often times reckless and impulsive. However, his motives are noble as he works to protect his friends and family from the Dark Lord.

2. Tyrion Lannister from Game of Thrones

Tyrion Lannister plays a main character in George R. R. Martin's Game of Thrones. While Tyrion Lannister's status of good or evil may be up for debate, his dynamic nature makes him one of the greatest characters ever created. Tyrion might have been born into one of the most powerful houses of Westerlands but his physical appearance lead him to endure an unloved life.

In order to navigate the cruel hand he's been given he relies on his ruthless wit and uncanny way of making a joke out of everything. His character plays on a delicate balance between personal tragedy and survival.

3. Aragorn from Lord of the Rings

Aragorn of J. R. R. Tolkien's Lord of the Rings can best be described as the "perfect hero"— noble warrior who ends up with the princess. Throughout his journey he demonstrates strong leadership, humility, perseverance, and selflessness.

Tolkien's inspiration of the character has been heralded as prominent historical figures, including Christ himself. This serves as testament to Aragorn's very nature—one of servitude leadership and bravery.

4. Morgana from the Authurian Legends

Morgana, otherwise known as Morgan le Fay is a female figure in the Authurian Legends. Her depiction wanes between malevolent and benevolent over the course of this popular fantasy series. She is described as an enchantress with evil motives.

While there prevailed an existential bone to pick with her half brother King Author, in earlier works she was seen as a friend to him who even wanted to protect him. She is a polarizing figure but a powerful one. Many have held her as a feminist icon because of her staunch claim to autonomy and what she represents in a fantasy world centered around male heroes.

You’ve probably noticed that all of these tips for writing realistic fantasy characters apply to every type of fictional character. That’s because at the end of the day, your fantasy cast are just fictional people with some extra abilities or strange appearances.

Don’t get so caught up in world-building differences that you forget to humanize your non-human characters.

Who is your favorite fantasy character? Let us know in the comments!