What do Star Wars, the legend of Prometheus, and the epic tale Beowulf have in common? They all follow the stages of Joseph Campbell’s hero’s journey.

Read on to see an analysis into how Joseph Campbell came up with the concept of the hero’s journey, as well as the common counterarguments to this well-known literary archetype.

What Is Joseph Campbell’s Hero’s Journey?

The term was coined by Joseph Campbell, an American writer and editor who was fascinated by myths from various cultures and literary traditions. He noticed that many heroic stories follow the same narrative stages, no matter which culture or time period they come from.

Since 1949, countless stories have used the hero’s journey archetype, from George Lucas’s Star Wars to Disney’s The Lion King.

How Did Joseph Campbell Develop the Concept of the Hero’s Journey?

Joseph Campbell was born in New York City in 1904. As a child, he took frequent trips to Buffalo Bill’s Wild West exhibition and to the American Museum of Natural History, where he became fascinated by the Native American exhibits.

He began noticing parallels between stories from the Christian Bible and stories from Native American religions, which made him wonder whether other mythologies might also share those commonalities.

As an adult, Campbell studied English literature at Columbia University. He read and analyzed classic religious and mythological texts, such as those of the Buddha, Moses, Mohammed, Jesus, and countless others. Over time, he became convinced that mythologies worldwide have many similarities, and that they shared a universal narrative backbone—a "monomyth." 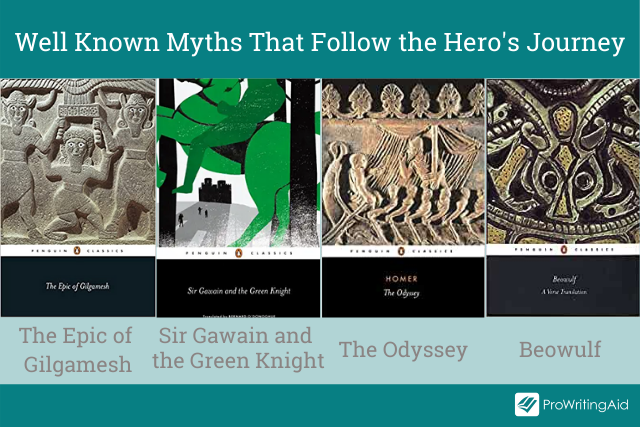 Besides studying classic stories, Campbell also studied the work of early 20th-century analytical psychologists. In particular, he became fascinated with the work of Sigmund Freud and Carl Jung. This was crucial to the development of the hero’s journey, as the transformative aspect of the structure closely resembles Jung’s theory of death and rebirth.

Campbell first coined the term "hero’s journey" in 1949, in his comparative mythology book The Hero with a Thousand Faces, which was later adapted into the TV show The Power of Myth. In this book, Campbell outlined the hero’s journey in three basic stages and seventeen detailed steps. 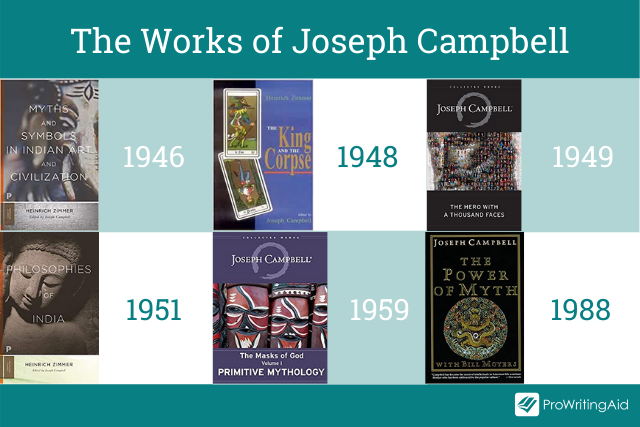 What Are the Three Stages of the Hero’s Journey?

In its simplest form, the hero’s journey can be described in three stages: departure, initiation, and return.

This is how Joseph Campbell summarized the hero’s journey in The Hero with a Thousand Faces (1949):

“A hero ventures forth from the world of common day into a region of supernatural wonder: fabulous forces are there encountered and a decisive victory is won: the hero comes back from this mysterious adventure with the power to bestow boons on his fellow man.”

Consider Star Wars, one of the most commonly cited examples of the hero’s journey.

In the departure stage, Luke Skywalker leaves his home planet of Tatooine with the goal of helping the rebellion defeat the Galactic Empire.

In the initiation stage, Luke undergoes various trials and tribulations on his heroic journey. He trains with Obi-Wan Kenobi to learn how to use the Force, rescues Princess Leia from the Death Star, and retrieves the Death Star plans and delivers them to the rebellion base. At last, he finally uses the Force to destroy the Death Star, fulfilling the purpose of his quest.

Finally, in the return stage, Luke returns to the rebellion base and wins a medal to commemorate his victory. He has helped his home world defeat the oppressive empire and gets to live as a hero. 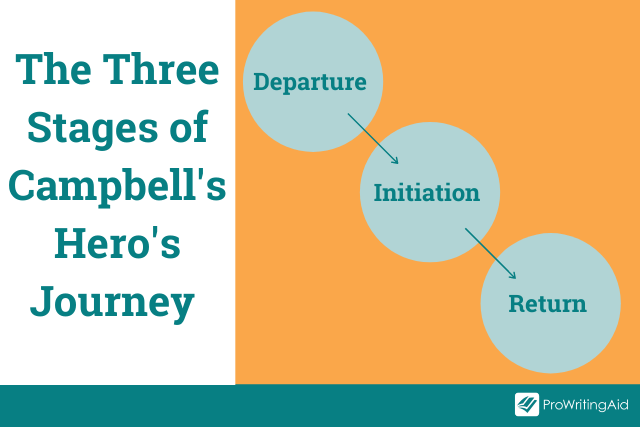 What Were the Original Seventeen Steps of the Hero’s Journey?

In The Hero with a Thousand Faces, Joseph Campbell outlined seventeen detailed steps of the hero’s journey.

These seventeen steps were later simplified to twelve steps by Christopher Vogler, a successful Hollywood consultant, in his book The Writer’s Journey (1992). These twelve steps are more commonly studied by writers today, since they’re easier to learn and remember than Campbell’s seventeen steps. 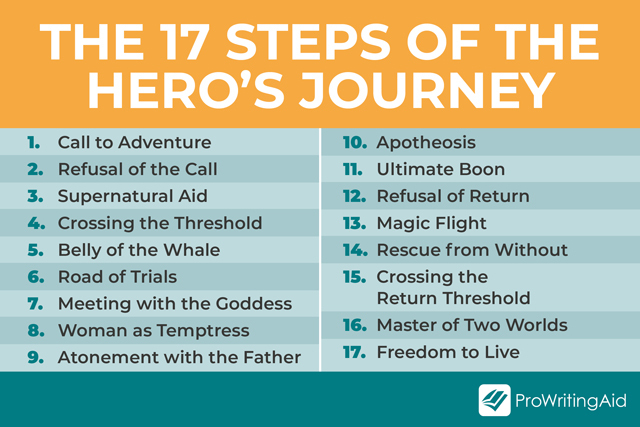 What Are the Counterarguments to Joseph Campbell’s Hero’s Journey?

In the past seventy years, many writers and editors have criticized Joseph Campbell’s monomyth. After all, Campbell lived in a society that strongly valued heroic individualism, and his theories were a product of his time. Our society has evolved since 1949, but the hero’s journey archetype has failed to evolve with it.

One of the most common criticisms of the hero’s journey is that it reduces the world to simple binaries: good and evil, victory and failure. If all stories followed the hero’s journey, writers wouldn’t be able to express a nuanced perspective of the world. 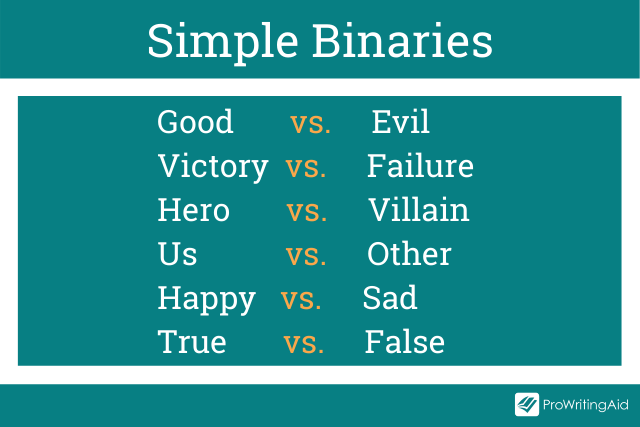 Another criticism is that the hero’s journey favors male protagonists, a tale about a hero leaving home to seek adventure in the outside world. In contrast, stories about women often involve looking inward, instead of looking outward, because of the domestic roles that women have traditionally been expected to fulfill.

The concept of the "heroine’s journey," also known as the female hero’s journey, was developed in 1990 by Maureen Murdock, a psychotherapist and a student of Joseph Campbell, in her book The Heroine’s Journey: Woman’s Quest for Wholeness.

“The feminine journey is about going down deep into soul, healing and reclaiming, while the masculine journey is up and out, to spirit.” 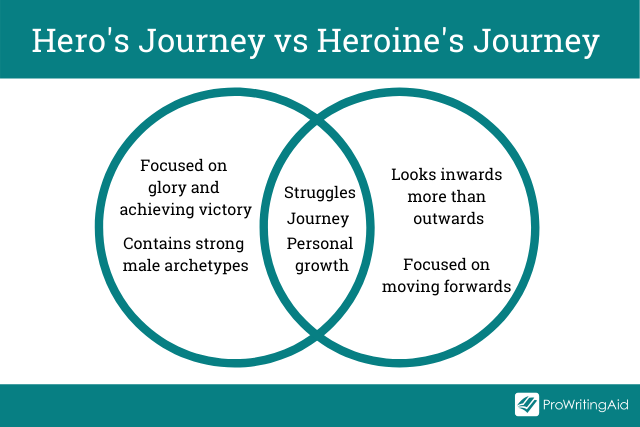 Similarly, stories about people of color or marginalized groups within our society sometimes follow different story archetypes. Joseph Campbell’s hero’s journey focuses on an individual hero, rather than a broader social context.

Stories about marginalized groups might center on communities reacting to oppression and navigating the rules set by the majority, instead of highlighting a single individual who proactively seeks adventure.

How Can You Use the Hero’s Journey in Your Writing Without Making Your Story Feel Formulaic?

There’s nothing wrong with using the hero’s journey in your own work. After all, it’s been spectacularly successful for thousands of years—there’s a timeless appeal to this story of adventure and spiritual transformation.

However, the hero’s journey can be a useful tool even if you don’t use it the way Joseph Campbell originally intended. Readers who recognize these classic tropes can appreciate an unexpected twist. Innovative literary fiction often plays with traditional narrative structures in new ways.

Maybe the protagonist realizes they needed something else all along, rather than victory in their quest. Or maybe the story comes full circle and returns the protagonist back to where they started. 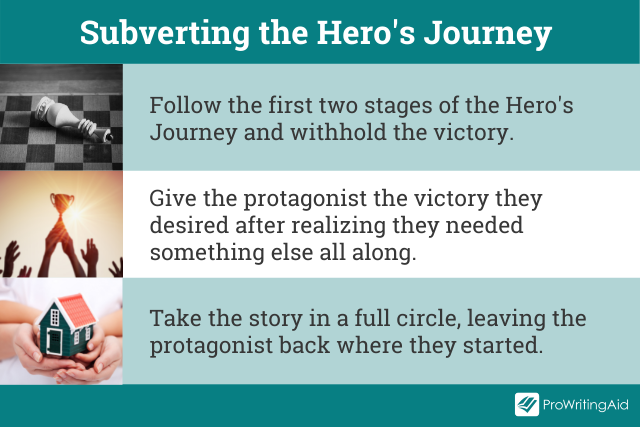 For more ideas, check out Steve Seager’s article on how to design a narrative more fitting to our contemporary context.

If it fits the needs of your story, consider changing up the hero’s journey in your own writing. You can build on Joseph Campbell’s time-honored literary tradition while also adding new twists of your own.